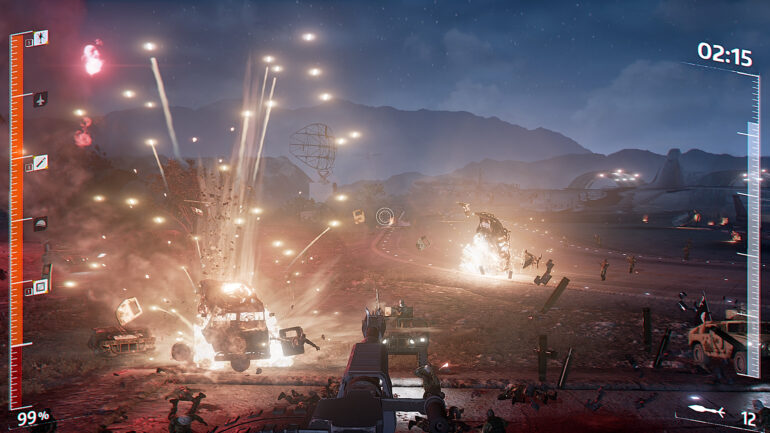 Do you want to blow off some steam or are you just the type who likes to shoot stuff up and watch things go boom as if you were in a Michael Bay movie? Perhaps IS Defense is the game for you

IS Defense is a single player, action arcade, first-person shooter game made from Destructive Creations, the developers behind the controversial overhead shooter Hatred. The game is set in the fictional year of 2020. In this year ISIS has taken over Northern Africa because of their uncontrollable expansion campaign thus spreading their genocidal understanding of the world’s order. Having acquired vast numbers and, the Islamic State launched an invasion upon Europe, over the entire Mediterranean Sea. In this game we get to take the role of a NATO stationary machine-gun operator who is also equipped with a rocket launcher, who is tasked of defending the shores of Europe and to take down as many invaders as possible. 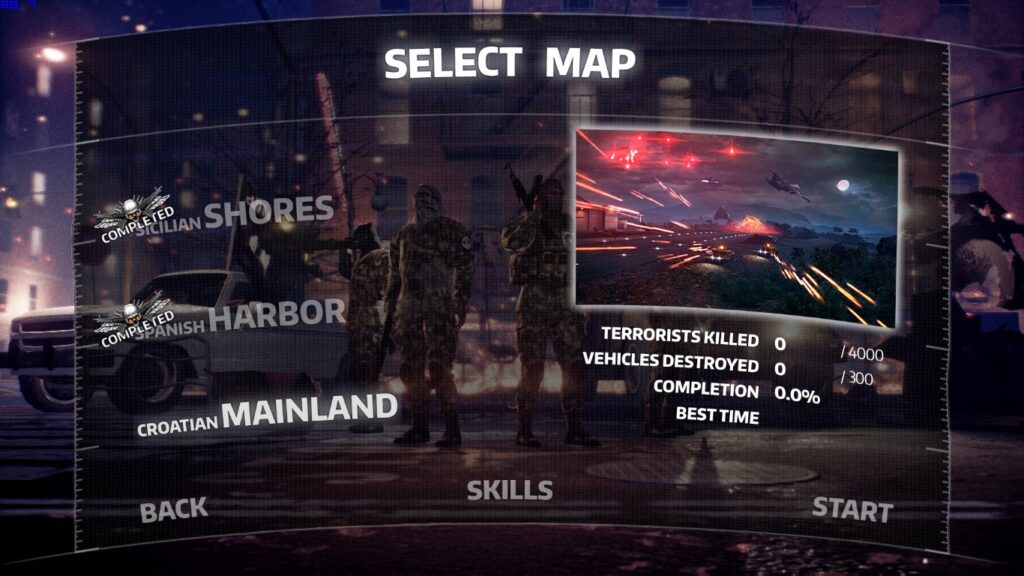 The game has three maps which you can unlock once you’ve met the required kill count and each map has a different amount of kill count that’s needed in order to unlock the next map. Each map takes place in different areas, the first being a beach landing, the second where in it takes place in a pier, and the last map taking place in an airstrip.

The game is very much straight forward as the genre implies, but there are things that keeps IS Defense more than enough to be satisfying. Just like any typical arcade-shooter genre which focuses on defense rather known arcade shooter games like house of the dead, your power-ups are via supplies through a gauge that you can see at the left side of the screen. With your supports raining down a hail of gunfire, the battlefield is sure to be chaotic where in smokes would cover the screen, vehicles would be flying around as the explode. 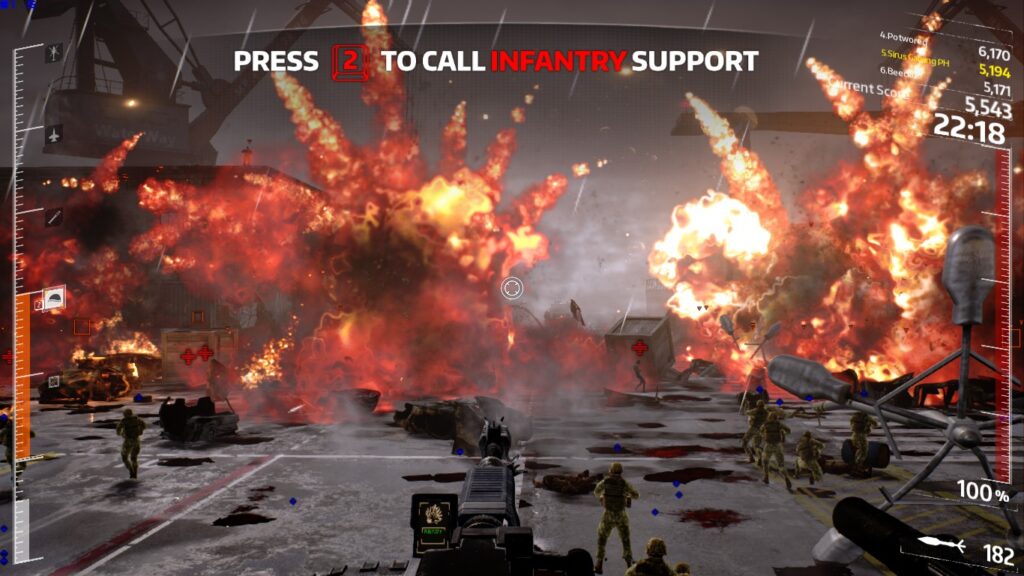 You can fill the gauge through killing the enemy and as you fill the gauge you have access on different kinds of support ranging from supply drop up to helicopter support.

Another thing which kept my interest on the game is that you can unlock skills which make your defense easier. On the same gauge as the supplies, you can view just below it, a gauge which indicates your exp till you can unlock another skill point. Mind you that each skill requires a specific number of skill point in order to be unlocked

This is a double-edged sword to you however. As you unlock skills, your enemies also get tougher. With this system, the game doesn’t rely on the typical wave system to indicate the difficulty of the enemies you are facing and their numbers. The more you unlock skills, the harder the game gets even just within the span of 6 minutes in a new map. This effectively makes the game unique, fun, and challenging. 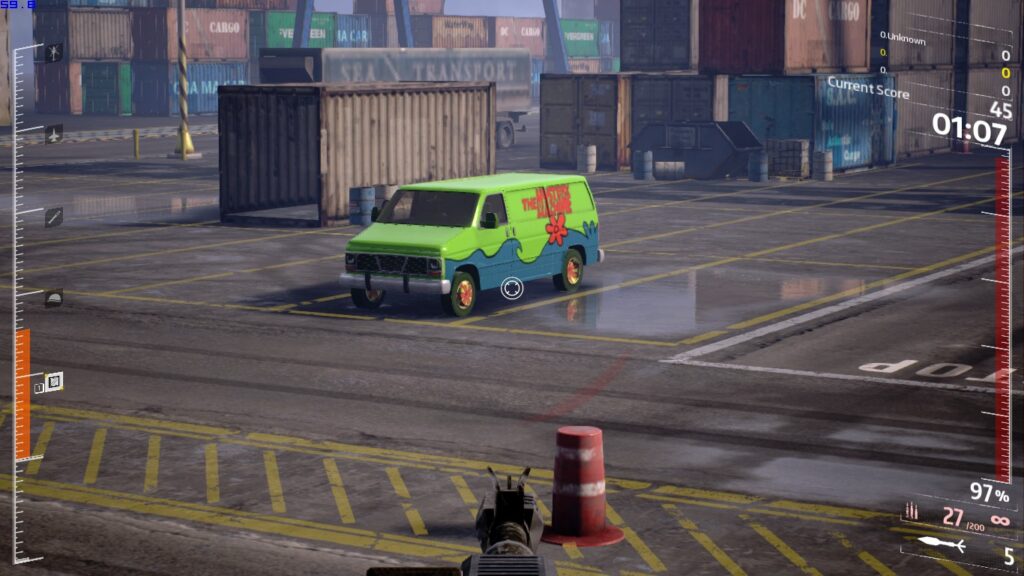 As to the sounds, its very straight forward. From voice acting down to the chaotic explosions and the sound of the gun as it goes off, the game gets just what it needs the player to hear to make him feel the chaos and action that he’s being immersed to. There is pretty much nothing I could nitpick from it except the fact that the voice acting could have been better. 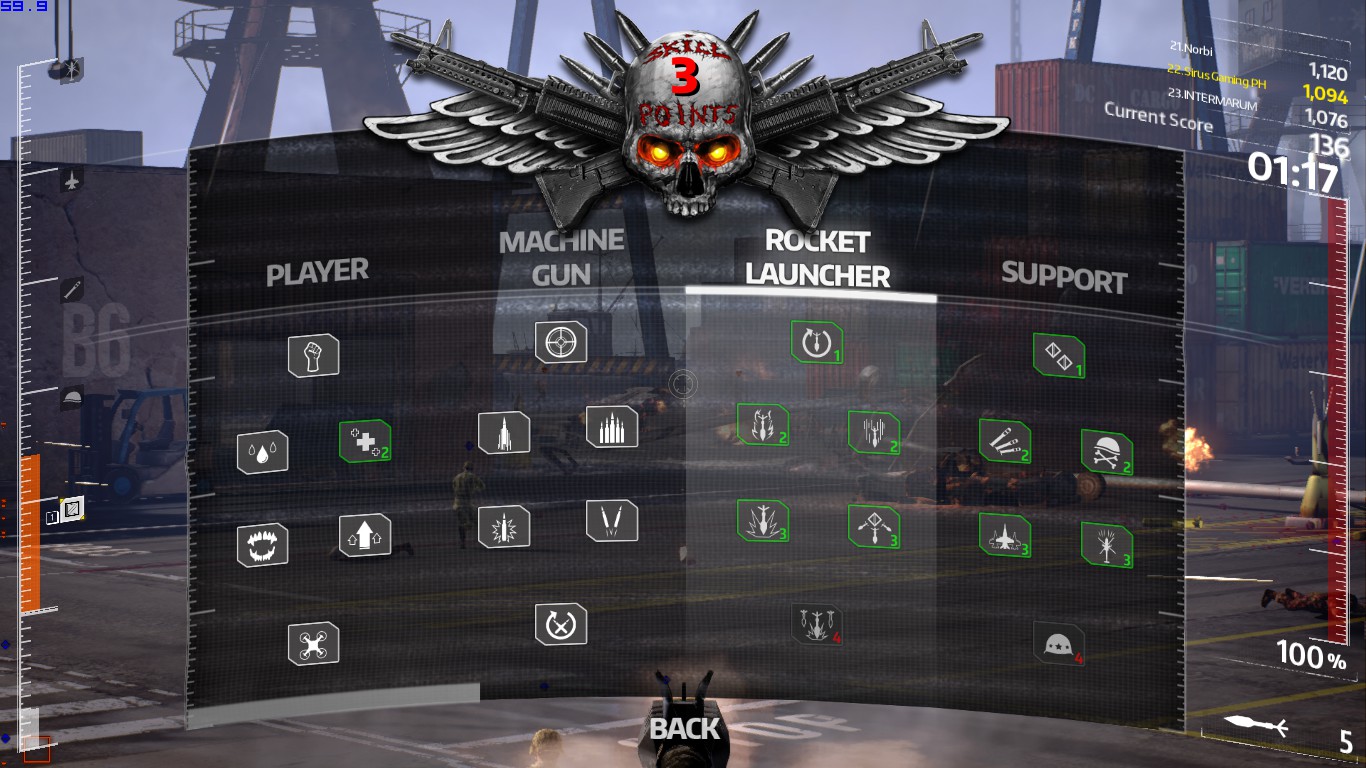 The game pulls off what it needs to pull off as an arcade game. It’s fun and challenging, it is unique in its own right and has even the guts to utilize an current international threat as subject for the game. It’s very straight forward. Though it isn’t a story driven arcade game like house of the dead, you can still pretty much have fun with the game through challenging yourself and motivating yourself to last longer and score higher than the people whose names have been reflected in the leader board.

Overall, I give the game a 7.5 out of 10. Yes it doesn’t have a grand setting like other indie games are trying to pull off but games like IS Defense reminded me that even with a game’s simplicity, you can still get fun from it, provided that its creators has done right to put the FUN in the fundamentals of this game. It is simple, it is fun and it does just what a single player shooter arcade should do while adding in its own touches but there were flaws and that was sometimes it would have a glitch where cars that blew up flew off farther than they should in an awkward manner but that really it. This game could still improve like more maps and adding more variety to the enemies, but as it is now, IS Defense is a good game.