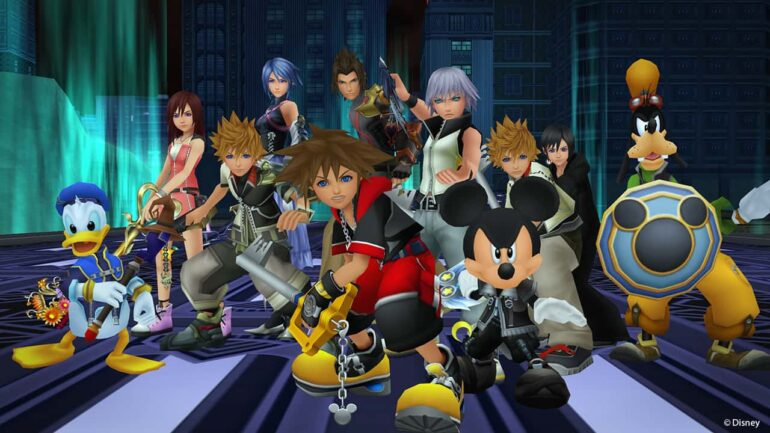 As we draw closer to the the long awaited third main installment to the Kingdom Hearts series, another HD collection is released. However, this time we can finally get a glimpse of what awaits our friends Sora, Donald, and Goofy. Kingdom Hearts HD 2.8 Final Chapter Prologue contains 2012’s Dream Drop Distance, Kingdom Hearts X Back Cover, and Kingdom Hearts 0.2 Birth By Sleep – A Fragmentary Passage. Three experiences for the price of one, but is this a collection worth your munny, or should you just save yourself from a convoluted headache?

Good things comes to those who wait, this rings true with Kingdom Hearts HD 2.8 Final Chapter Prologue. Although the title may scare and confuse you with it’s somewhat silly numbering, that shouldn’t stop you from picking up this collection, especially for fans of the franchise. Each section deals with events vital to the story leading up to Kingdom Hearts 3 and all manage to tie up beautifully with each other, which is sure to make your head spin in the best way possible.

The chunkiest piece of meat to come with your three course meal is Dream Drop Distance. The game originally found its way on to the Nintendo 3DS way back in 2012. This is a testament to the work done by Square Enix, as bringing the title into full HD shows how well the game holds up visually. Visuals are crisp and clean, with the game running at higher frame rates than what was on the 3DS. If you were to have no prior knowledge that this was released on the Nintendo handheld, you would’ve thought this was brought back from the PlayStation 2 era. Although, since it was on a handheld, worlds can feel empty and lifeless with no NPCs hanging about.

As for gameplay, it is what you would expect from a Kingdom Hearts game, but a lot is added — and removed, sadly — to spice up the formula. You control as both Sora and Riku as they embark on their journey to become true Keyblade masters. They must journey to find worlds that are stuck in an eternal slumber, and it’s their job to wake them up. Since these worlds are in a sort of dream state, there are new abilities and companions to be had called Flowmotion and Dream Eaters, respectively.

Flowmotion allows you to traverse through areas at high speeds, where you can bounce off walls and swing onto pole-like structures. Although aesthetically appealing, it can lead to some inconsistent platforming, where — more times than not —  you will find yourself fumbling all over the place. This also bleeds into combat, seeing you perform acrobatic attacks that deal high amounts of damage, which can break the game as you can just spam these attacks to finish off enemies quickly.

Gone are the enemies known as The Heartless in this game, instead you fight off what are known as Dream Eaters. Interestingly, however, they can also be your companions and are acquired by recipes scattered throughout the game. Each Dream Eater that is created, in turn, can become a member of your party. From there, you must nurture and grow your Dream Eaters, by either playing mini-games — which are fun little distractions, but nothing too deep — or engaging in battles. These little critters can provide abilities to both Sora and Riku, making for some interesting attacks and skills. This, however, comes at the price of not having Donald and Goofy in the game, who are Sora’s staple companions. Even summons are absent as a consequence, which is a shame as it was always amazing to see Disney characters battle along side you.

In terms of difficulty, expect to breeze through the game. There is little difficulty to be had, that is until you reach the last world. Here is where, if you’re not careful, you will experience a sudden difficulty spike. It seems the game decided to look back on its roots and go for a more Kingdom Hearts 1-esque style of boss battle structure, where you will fight multiple bosses in a row with no save points in between whatsoever. Overall, the game is still fun, but sadly cheapened near the end due to a sudden difficulty spike.

As for story, Dream Drop Distance can feel all over the place. It’s use of flashbacks to explain vital plot points in theory seems interesting, however is executed poorly. More often than not, it ends up ruining the pace of the story and leaving you with more questions than answers. Luckily, it makes up for it with charming characters and interesting encounters with old friends. Be prepared to find a few surprises, even from familiar faces.

Next up in the collection is Kingdom Hearts X; a movie that sets up the beginnings of the Kingdom Hearts universe. The movie is by no means on par with contemporary CGI films, such as any Pixar animation. However, it is still gorgeous in its own right by using the same engine that is being used for Kingdom Hearts 3. The movie manages to tell a cohesive story, bringing in a likable cast, despite not having any prior presence in any of the past games. Although Sora and other familiar faces are nowhere to be found, it still manages to fit within the universe, while also bringing in new elements to help flesh out the mythos.

Lastly, and the most awaited of the three, is Birth By Sleep – A Fragmentary Passage. Fans have been dying to get a taste of Kingdom Hearts 3, and thankfully, Square Enix hasn’t disappointed. Here, you control as Aqua making her way through the Dark World, but if you were expecting just a simple tech demo, you are in for a disappointment in the best way possible. It’s not only a means of showcasing what gameplay is going to be like in Kingdom Hearts 3, but the story it manages to tell is absolutely vital to the series as a whole. With A Fragmentary Passage, everything is neatly, and wonderfully, tied up to set the stage for events to come. 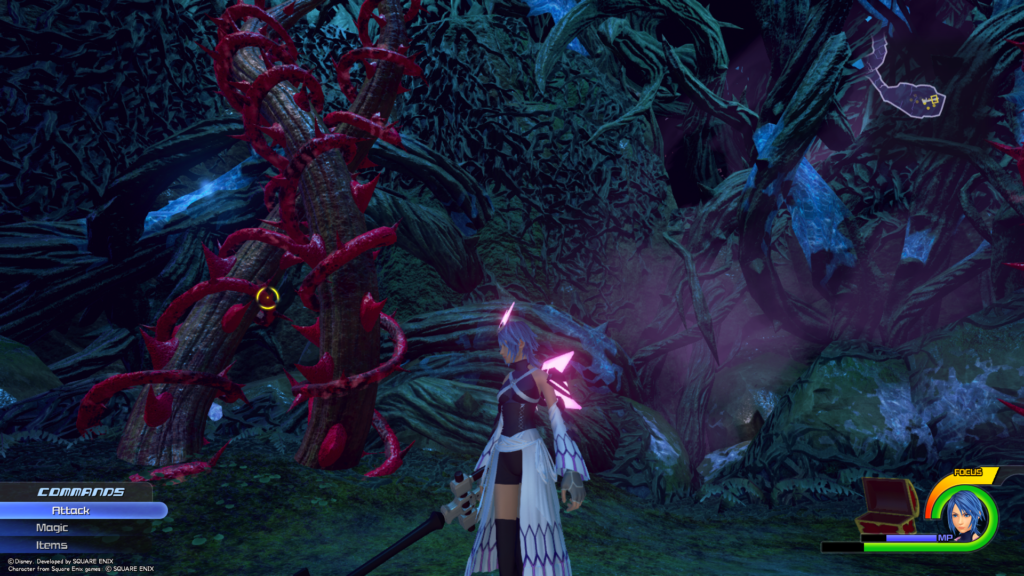 The gameplay in A Fragmentary Passage is refined from past games, while also introducing new elements. Magic is given more emphasis this time around, where enemies are shown to have different weaknesses to certain elemental spells. Not only that but depending on what spell you cast, different situational commands can be executed. Situational commands occur after landing a certain amount of hits and change depending on what attacks you land, whether basic physical attacks or magic attacks, such as Firaga and Blizzaga. Overall, combat is the best it’s ever been, by adding more strategical options via magic and situational commands.

Also new to the series, are wardrobe accessories and options. Throughout the game, you’ll be given challenges to complete and by doing them you can unlock different clothing options. These challenges are also a great way to add a couple more hours to your game time, as the game clocks out to be just over 3 hours. Although none of the clothing options offer any stat boosts, they are a great way to personalize Aqua and give a sense of ownership over the character. Maybe in the future, these will not only be for aesthetics, but also a means to add stat boosts to Sora, or whoever else you may play in Kingdom Hearts 3. 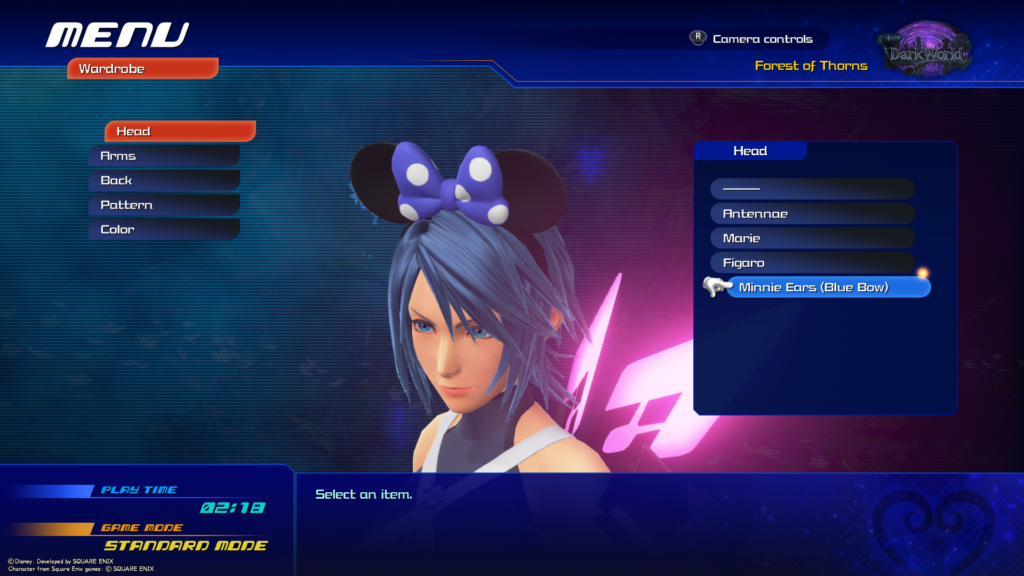 Visually A Fragmentary Passage is absolutely gorgeous. Although, not as high fidelity as Final Fantasy XV, it is definitely gorgeous within its own style. Character models are more rounded and lack any of the jagged edges seen with the past games on PlayStation 2, but this is to be expected of course. Lighting is a lot more present as well with this entry, where cozier tones are added with areas in low lighting and vibrancy in well lit areas. Not only that but the effects done when casting magic is also accentuated by the lighting and particle effects. All this does come at the cost of lower frame rates, however, with major dips occurring in intense battle situations. Luckily, it’s nothing too drastic as most of the time it manages to stay at 30 fps. This can be quite jarring at first  when coming straight off of Dream Drop Distance, but nothing you won’t get used to after a couple of minutes.

Overall Kingdom Hearts HD 2.8 Final Chapter Prologue is a collection well worth every penny. Dream Drop Distance is a fun entry to the franchise, but not without its issues; Kingdom Hearts X is a fun little movie, especially for those invested in the franchise’s lore and mythos; and A Fragmentary Passage is a wonderful tease of what is to come, by introducing new elements and setting the stage up for Kingdom Hearts 3.  If you’re looking for your Kingdom Hearts fix, look no further, but you may have to wait a while until they announce the release date of Kingdom Hearts 3.