Once again, Lego took up another franchise and made another awesome game about it.

Lego Jurassic World lets you play through all the movies starting from the very first Jurassic Park up until its latest movie, Jurassic World. Developed by Traveller’s Tales as an action-adventure game, you can relive your favorite scenes from the movies in Lego form by going through challenging levels and solving tricky puzzles while unlocking other playable characters and bonuses along the way. Players can enjoy going around the parks and locations found on Isla Nublar and Isla Sorna as their favorite Jurassic movie character or even as their favorite movie dino; be it as the T-rex from the first movie or as one of the raptors of the Raptor Squad.

Like the previous Lego games, Lego Jurassic World did good when it comes to giving hours of entertainment; not only by letting its players have fun building and destroying Lego structures, but also by making their audience blurt out a chuckle once in a while through its light humor which was also present in their other titles. It’s those silly hi-jinks that are slipped in almost every cut-scene that made playing the game more enjoyable. In the movies, a lot of people met their untimely ends in the jaws of the prehistoric creatures, but not in Lego Jurassic World; they managed to turn the morbid scenes into comedic ones so no man nor dino really died in the game.

Another notable aspect of the game is the open world setting, just like what they did with Lego Marvel Super Heroes. You can freely roam around the old park and the new park as a minifig or as a dino. Yes, you can roam the park as I.rex and the people won’t mind. Vehicles can also be used to traverse the map such as the gyrosphere that was used in the recent film. Scattered across the map are the different levels and minifig-specific puzzles that reward you with red or gold bricks which would unlock certain bonuses and special characters by completing them.

Speaking of unlocking stuff, the recent Lego games made for their franchised sets have always been structured on going through the game levels more than once to be able to fully complete them. The levels were made so that you are not supposed to solve all of their puzzles and find all bonuses in just one run. Puzzles and bonuses are often gated by a specific action or a code that can only be unlocked by specific characters. Going through a level once will give you an idea on the kind of characters you need to bring but only when you unlock a particular character a few more levels after would you like to go through the Free Play mode for a 100% completion. (You can try replaying as early as you finish the story mode but you’d probably end up replaying it again because you haven’t unlocked that minifig with the skill to solve that specific code. Just a heads up if you’re new to the game series.) One of the new features added on to Lego Jurassic World as a Lego game was the multi-skilled minifigs which can be pretty handy in some levels; but then again, by the time you get these guys, you’ve already unlocked the Free Play modes which grants you access to all of the minifigs you have on your roster so it’s kind of useless, actually. 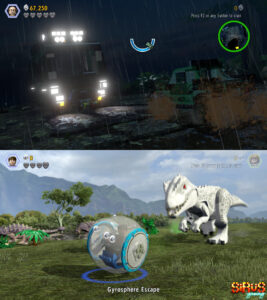 Graphics-wise, Lego Jurassic World is still blocky; which is good. The style didn’t really change much ever since they released Lego Star Wars but there are improvements when it comes to the finer details such as having a more realistic looking environment and doing a better job at melding the organic background with the bricks. The other awesome thing about Lego Jurassic World is that they used some of the original audio recordings from the movies which can be heard more noticeably on the Jurassic Park levels because of the slight scratchiness and the background noise. Talking about audio, it’s also worth to mention that Lego Jurassic World also featured the movie soundtracks and of course that iconic and wonderful theme that still brings chills down my spine.

The fun factor that this game puts out is just fantastic. Just by the fact that you can play as your favorite dino and stroll around the park brings an absolute joy to a fan. Some notable levels are those with chase scenes with the T.rex and the spinosaurus that are really thrilling. Do watch out for those jumpscares brought by the pesky raptors, though, as it happens a couple of times during some levels. The vehicles in the game are quite tricky to master but the gyrosphere is just too fun to use almost everywhere.

Some of the other fun things you would want to look out for in Lego Jurassic World are the Easter eggs and references such as a cameo from which seems to be Marty McFly and an unearthed DeLorean at the dino digsite from Back to the Future. There’s even a YouTube video showing the DeLorean in action; the video poster claims they saw the in-game files for the DeLorean and forced unlocked them into the game. Smells like a crossover DLC. Plus, after the end credits of the game, Dr. Grant can be seen to have unearthed some kind of alien tech panel which hints to the next upcoming Lego game bound to be out by next month.

This review is based off a copy purchased by the reviewer. 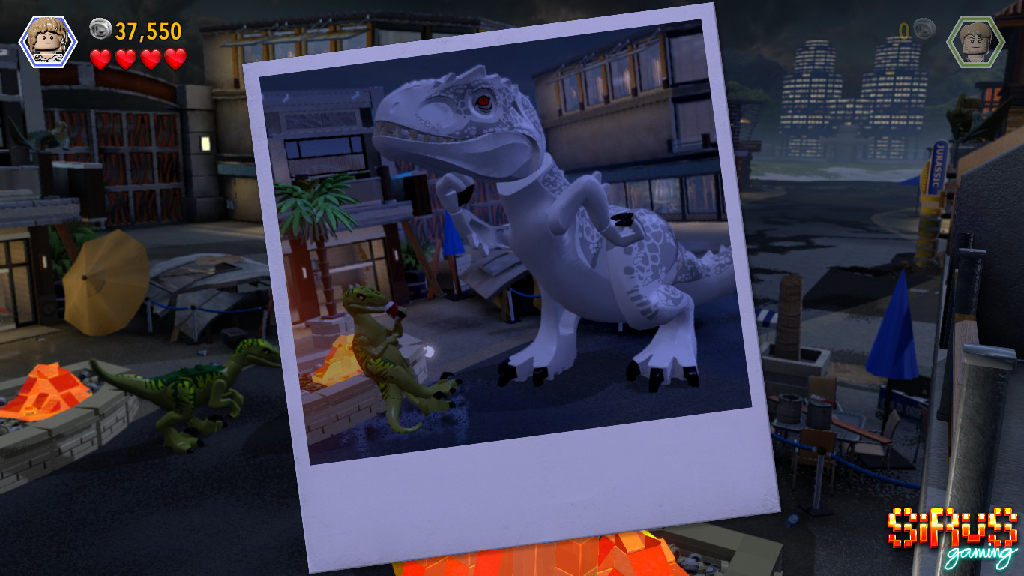