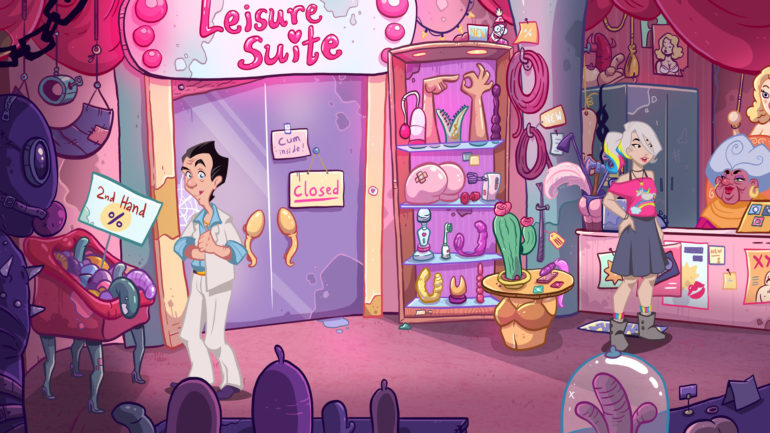 Which bring Larry Laffer’s end goal throughout the entire game: get laid.

It’s not a bad goal, per se. Throughout all the Leisure Suit Larry games, sex has always been the driving motivation. Sexual symbolism is everywhere in this game. Hell, Leisure Suit Larry Wet Dreams Don’t Dry is so full of sexual euphemisms that Sigmund Freud would be having a field day.

The game’s primary source of humor–besides the sexual innuendos–is in its social criticism. Wet Dreams Don’t Dry seems to poke fun at stereotypical millennials, in-game jokes about microtransactions, and obsession with social media.

Considering the fact that it’s 2019 and most developers wouldn’t think of showing so much as a fart joke, I have to praise Leisure Suit Larry Wet Dreams Don’t Dry for having the balls to release like this. It’s bound to offend people as it spreads shots everywhere sparing nobody from slapstick.

Wet Dreams Don’t Dry can be rather grotesque at times depending on your level of tolerance. If you don’t mind Larry picking up a cellphone covered in vomit, then this game might be for you. Similarly, a stereotypical nerd takes some panties from Larry and proceeds to sniff them, after said panties were worn by someone who just took a shit. The game is full of crude jokes and sexual imagery.

There are also a few references that made me chuckle a bit. Other well-known brands are renamed in a lawyer-friendly substitute: Instascrap, Timber, Wankypedia and etc. There’s even a guy named Bill Jobs, who’s called BJ for short.

That being said, most of the characters are comic over-the-top stereotypes. And even as a comedy point-and-click adventure game, I couldn’t find myself feeling attached to if you paid me. Even Larry himself is this unlikable loser who can’t read the mood. Even when his life is in danger, he can only ever think about getting into someone’s panties.

Most puzzles in Leisure Larry are a bit challenging. Challenging in the case that you have to look for the right item or talk to the right people to proceed with the story. Nothing ever really made me feel smart, just frustrated at the fact that I couldn’t quite find the right item. While I’m fine with the fact that the game doesn’t make it too obvious, it’s a bit frustrating not to know that you’re supposed to use the make-shift fishing pole under the manhole. If you get stuck, you’ll most likely be looking at a walkthrough online after going through several locations for an hour. Though some can take as easy as ten seconds for you to figure out.

Some items are also rather small, that it’s difficult to spot them. The gold tooth in a fossil was a particular item that comes to mind when I mention this. The cursor doesn’t quite identify it unless you hover exactly on it. And Larry doesn’t even mention anything about it. At times you’ll find yourself clicking over every item that looks like it could be taken. And at the start, you’ll have a lot of stuff in your inventory that you don’t know what to do with and seem rather pointless.

Gameplay-wise, Leisure Suit Larry Wet Dreams Don’t Dry on the PlayStation 4 is lackluster. It might have fared better on PC where it’s, you know, a point-and-click adventure game. The PlayStation seems to have adapted the game poorly. While moving Larry around isn’t a problem, the user interface however is. Scrounging around the menu and inventory can seem like a pain at times. Most of the menus are mapped to the buttons like hotkeys. Want to access your phone? Want to access Timber? Or your inventory? Press the directional buttons. Not bad, per se. But some like the inventory menu allows you to craft items the same way. Problem is, there’s no real tutorial on which buttons.

At the start of the game, there’s this weird exam that it questions you to prove you’re really an adult. Which I guess is some sort of in-game joke by itself. But honestly, it doesn’t prove you’re an adult cause some of the questions are useless trivia that the average person wouldn’t know. You have the option to skip it unless you want a trophy. Then, in that case, Google is your friend.

Leisure Suit Larry Wet Dreams Don’t Dry can be a fun game to play if you’re in it for its humor. But it’s most likely a game you’re gonna play once and never touch again. So there’s not much longevity here.

Disclosure: This review is based on a review code provided by Assemble Entertainment. Read our review policy to know how we go with our game reviews.
Tested on: PS4 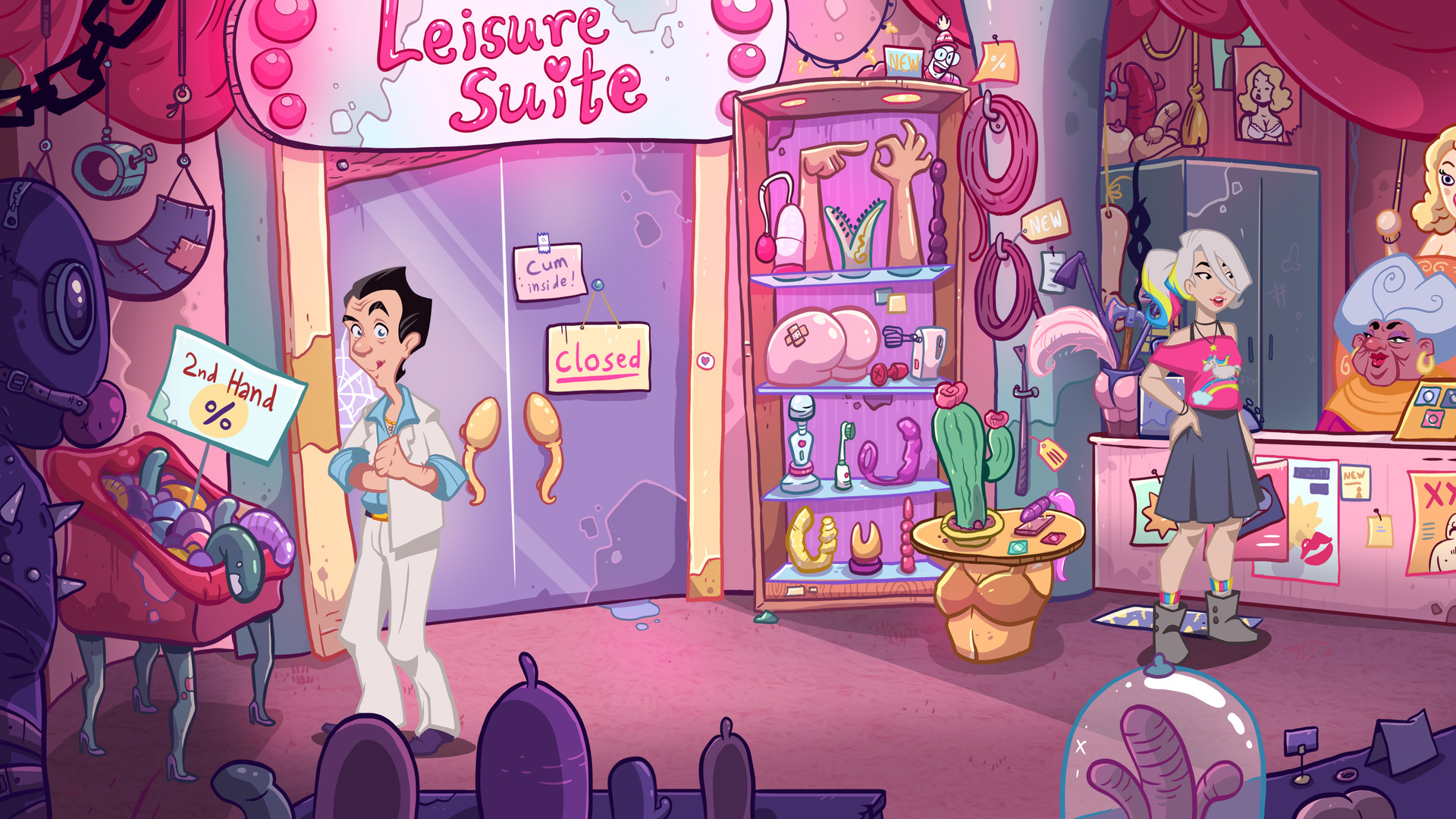 Leisure Suit Larry: Wet Dreams Don’t Dry – Review
Score Definition
You better have to choose if it’s worth spending your spare cash, because it might not be the game for you and it might be for others.
Pros
Doesn’t Hold Itself Back
Isn’t Sensitive to Anyone’s Feelings
Makes Fun of Everyone Equally
Cons
Boring Gameplay
Terrible UI
Your Mileage May Vary
6
Justified