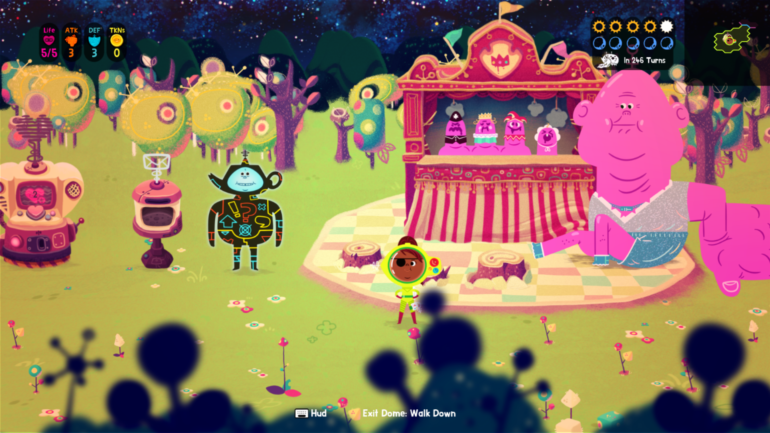 Loot Rascals is a step-turn-based alien-punching roguelike, in which you control a cartoony astronaut out to get the titular alien rascals. The game picks up after your nameless astronaut is stranded on a planet where a space theme park development goes horribly awry. The character’s job is to check on Big Barry, a large yellow mech that was injecting some magical space goop into the planet, which was supposed to materialize itself into the aforementioned space park.

Barry has been hijacked by some eldritch goddess looking to use the space goop to summon creatures from the void beyond and to invade the planet that is currently trying to kill you. Luckily she is on your side, and helpfully resurrects you in exchange for your cooperation in keeping the native population under control.

The game is split into five general zones which you must explore in order, each containing rascals more powerful than the last. Maps are further subdivided into a hexagonal tile grid, which you can explore through the use of the arrow keys or the WASD keys. Moving takes up a turn, and the turn allotment is indicated at the upper right, below the day/night indicators. Every turn, the indicator moves to the right, and runs through five turns of day and five turns of night. The environment changes color with the time as a helpful reminder. Combat is carried out automatically if you and a baddie are on the same tile, and whoever initiates combat is dependent on what type of alien you’re fighting, and the time of day.

Players are given an unlimited amount of turns to explore each zone, with a catch – if you spend too long in a zone, stronger aliens start showing up. As the turn counter drops, more reinforcements arrive, until alien Death appears to give you a beating, in a move reminiscent of Persona 3’s death. This Death however ignores silly limitations like turns and only moving one tile at a time, and will rush straight at you to avenge his fallen alien brethren. To avoid this the player needs to find an exit portal which will take them to the next zone.

There are various types of alien rascals, which can drop equippable equipment cards on death. Over several reincarnations you’ll figure out pretty quickly which enemies are best tackled during day or night, though your spunky adventurer logs these into their journal for future reference. Some enemies have specific movement patterns, and others have gimmicks depending on movement and positioning. (Watch out for some invisible enemies.) Stronger enemies are palette-swapped, while minibosses are notably larger and have particular names. The chef npc will ask you to hunt one down to retrieve a stolen card of his for each zone you play through, and it’s worth trudging back to base to deliver the goods as the perks he gives you in exchange are extremely useful. 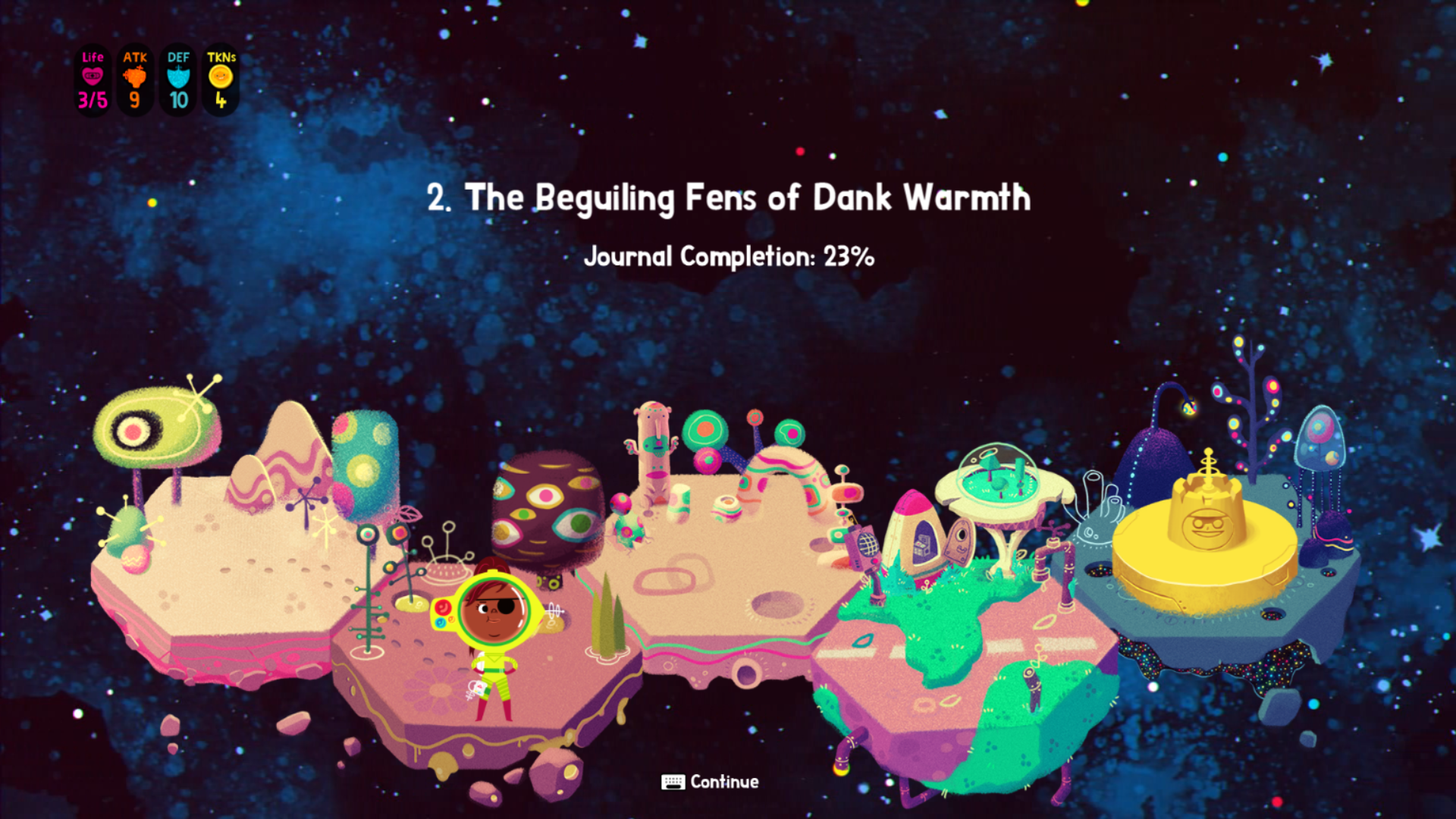 The cards themselves are quirky, ranging from mutated pool toys to repurposed cosmic junk, and can be scrapped for currency. Most cards are split between attack and defense, and are equipped to the character in a 2×5 grid. Some cards have keywords that affect other cards on the grid, while others prefer to be placed in certain rows or columns. This can get complicated very quickly as cards can also pass negative effects to each other or just nullify other cards outright. Others are consumable with effects like replacing your loadout with different cards to revealing the area map in exchange for currency.

Certain aliens also drop specific ability cards, which can be slapped onto existing ones to give your astronaut extra powers, and it’s worth hunting these baddies down to get a potentially game-changing ability. That said, once you stick the ability onto a card, you can’t take it off the card, so your freeze power could be attached to an equipment card that becomes outclassed by drops in the next zone. As a result, the ability to manage cards in your loadout between fights becomes essential to survival. Some aliens drop a relic card, which are unique to each stage, and if you manage to get all of them by the time you get to the last zone, you can assemble them to do something… mysterious. (I actually haven’t gotten that far yet as the game is determined not to let me pass through the fourth zone.)

Fortunately the game doesn’t drop you into hostile territory immediately, and instead spawning you in a safe zone where you can find some npcs and a healing terminal. (Healing costs currency.) Upon leaving the confines of the zone, most baddies will try to close in on you and kill you. Much of the strategic element of the game is positioning your character in such a way that you will always initiate attacks, while not getting squeezed between obstacles and difficult terrain. There are bombs and other sorts of environmental hazards, like swathes of ice and a periodically overheating vent, as well as an enemy spawning machine that runs so long as something (typically a baddie) is activating it. Things go out hand very quickly, and it’s not uncommon to find yourself surrounded while trying to get your bearings. That said, in later stages of the game it’s entirely possible for you to be stuck at base with a huge baddie in your way that you’re completely unprepared for, at which point you will die – and the rascal loots your corpse for a particularly useful item you’ve had on you. 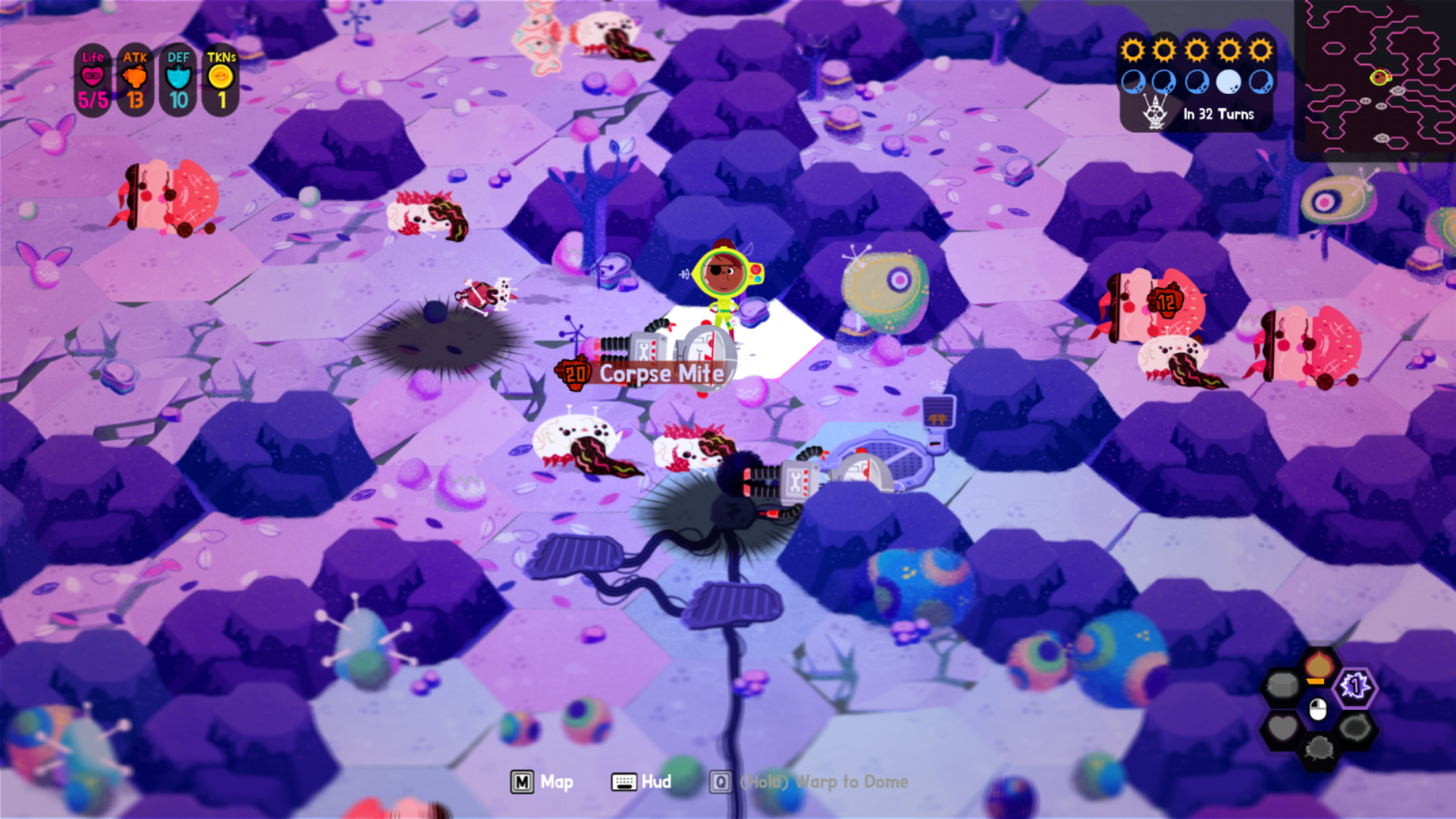 You will sometimes stumble upon cards that once belonged to another player and choose to use or to return it. Likewise, item cards looted off your player can appear as item drops in another player’s game, allowing them to use it, but they can choose to return it to you or to use it for themselves. Be forewarned that this selfishness can trigger a hologram of the player that is sent out to attack you in the future. If you were kind enough to return the card, the player’s hologram will help you out in combat instead.

Games last anywhere between two minutes to over an hour, depending on if the randomly-generated world is actively screwing you over or has dropped some unusually good equipment. The game does give you access to the numerical seed that the world was generated from, and you can share the seed code with other players to try out those maps, or you could retry your own seeded maps. There’s a daily challenge that you can take on repeatedly which consists of the same five mapsets, and a leaderboard that lets you see how far other players have gotten through the challenge. 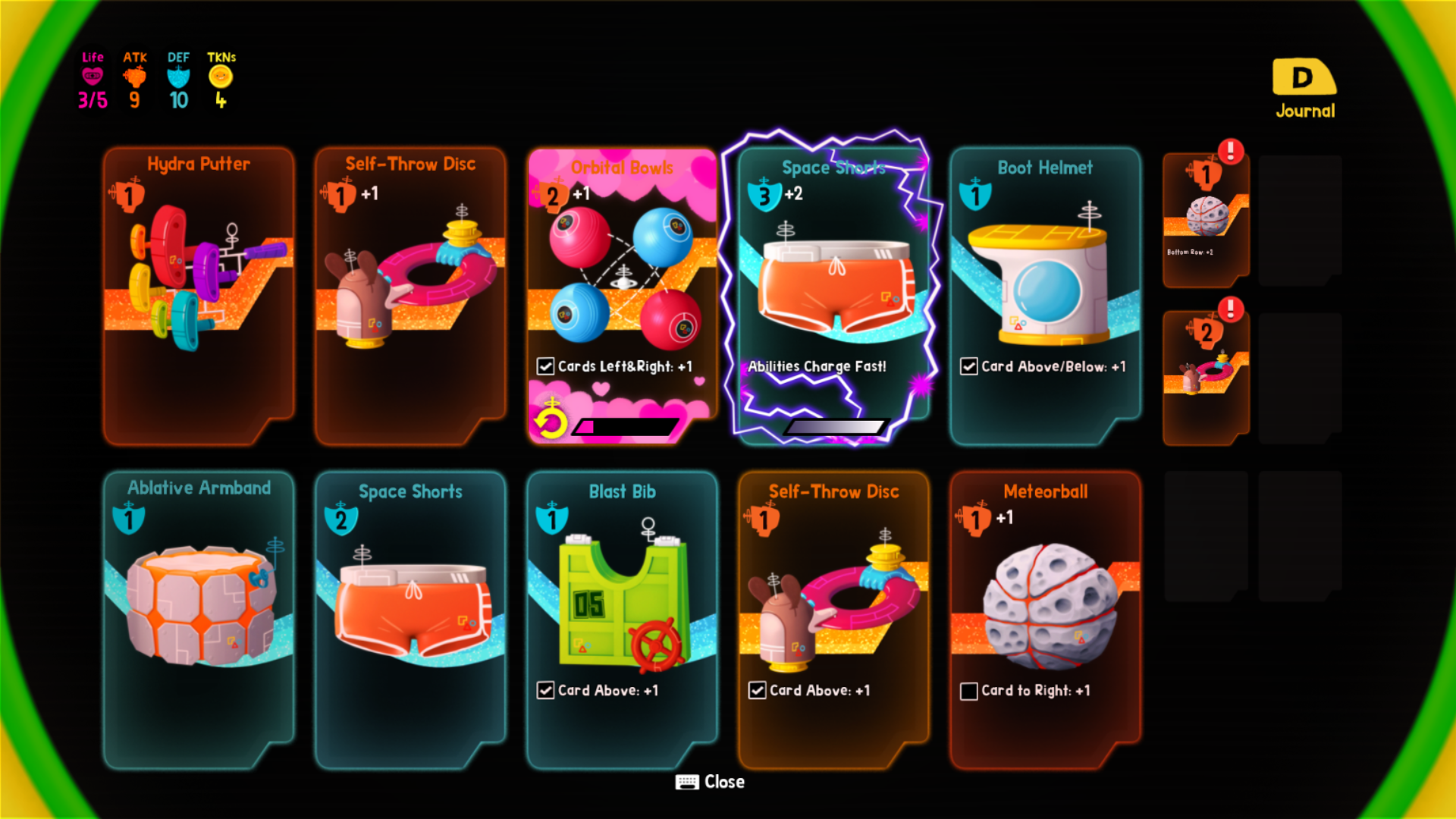 The visuals are lovely, combining bursts of color evocative of Katamari Damacy with all the charm of Foster’s Home for Imaginary Friends, if the Imaginary Friends were all inexplicably out to kill you. Your protagonist, either the male Olimar expy or the dashing eyepatch-wearing female badass, is silent, apart from grunts of pain and war cries accompanying attacks. Bright colors paint the world you are exploring and the distinct day and night versions of the worlds are gorgeous. Terrain and effects are painted with equal attention to detail, and the interface is very clean and allows you to enjoy the random world that you are exploring. Music is very chill, which is completely at odds with the carnage that goes on during gameplay, and you can hear differences in the day and night tracks.

A great title for the genre and definitely worth the investment.