Arcanist makes an entrance in a flashy style! 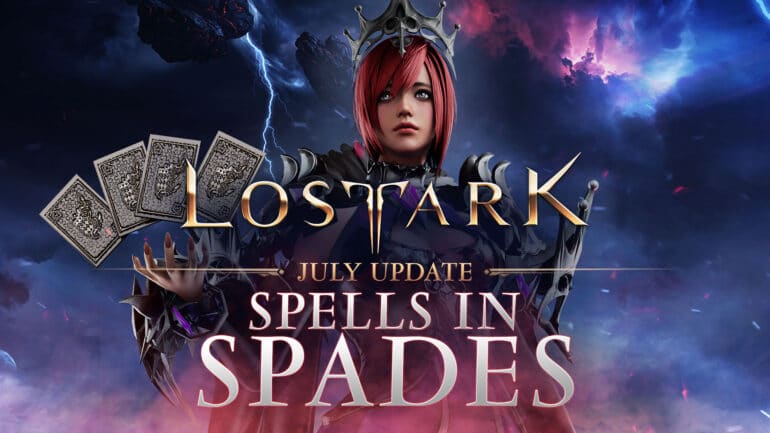 Smilegate has recently released new details about the Lost Ark July 2022 update and it will add a new class.

The July “Spells in Spades” update will be released tomorrow and downtime will start on July 20, 2022 at 12 AM PT/ 7 AM UTC. It is expected the downtime will last four hours. Fans will expect new additions like Arcanist Advanced Class, the Inferno Difficulty of the Valtan Legion Raid, Challenge Abysal Dungeons, a new summer event, summer cosmetics, and a lot more.

The Arcanist uses special cards that she imbues with Magick and then use them in different ways. She can slice up enemies with tons of thrown cards to summoning powerful Magick attacks from the cards. She will be joining the Bard and the Sorceress and the third available Mage Advanced Class. Learn three types of skills, the Specialty Card Meter, and prepare to put skills and engravings in proper slots.

This will be the most difficult version of the Legion Raids as the Inferno difficulty is all about proving to be the best among the best in the game and earning prestige. Inferno rewards offers titles, achievements, Stronghold structures, and more. A new in-game vendor will be added for players to access a variety of prestigious rewards which can be earned after various numbers of clears.

Here are the differences between Normal/Hard and Inferno difficulties:

Valtan Inferno difficulty requires players to be at item level 1445.

The new time-limited event is the Maharaka Festival where players enjoy pool-party escapades and more. Complete on teams to try to push opposing teams out of the arena by firing at them with a Water Pro water gun. As the game progresses, the arena gets smaller and smaller. Rack up points as quickly as possible to win. The event occurs every two hours and players can earn Maharaka Leafs to exchange at an Event Vendor for valuable rewards.

Challenge Abyssal Dungeons will equalize your power against your foe on Abyssal Dungeons in a new weekly activity. The challenging the dungeon, the rewards will also be greater. Players will be use various honing material selection pouches that will rotate through the rewards and cards are available as drops or in the end-of-dungeon loot auction.

This update introduces two new progression events, a Punika Powerpass and a Hyper Express Event that helps accelerate a character from Item Level 1302 to 1370.

Players will receive a Punika Powerpass after completing Punika’s quest “Berver’s Friend” during the event period. To access this quest, players must first complete all Adventure Quests (marked by purple exclamation marks) on Punika to collect stamps and become a citizen. Once the final quest in this chain, “Honorary Punikan” has been completed, you can talk to Nia in Nia village to start “Berver’s Friend.”

If you’ve already finished the quest before the update, you’ll get the Powerpass when the event starts! The Punika Powerpass will function like the North Vern Powerpasses available to players in the launch version of Lost Ark— once you’ve completed the storyline through that continent, you can use it to bring an alternate character to that point in the game. With the Punika Powerpass, you’ll receive Item Level 1302 gear. This is an event Powerpass that expires on September 28.

Players will be able to designate one character between item Level 1302 and 1370 on their roster to participate in the Hyper Express Event, where they’ll earn honing materials, and level up quickly to Item Level 1370. The designated character will earn rewards upon reaching Item Level 1302, 1310, 1320, and every ten levels until Item Level 1370— which grants a particularly valuable reward.

We’re excited to see the new alternate characters roaming Arkesia as players experience different playstyles or quickly level up a brand new Arcanist. For newer players, we hope the new Mokoko challenges found below help them quickly level up and reach the additional events.

This update also includes a new Growth Support Effect which will aid players in advancing their characters to item level 1370.