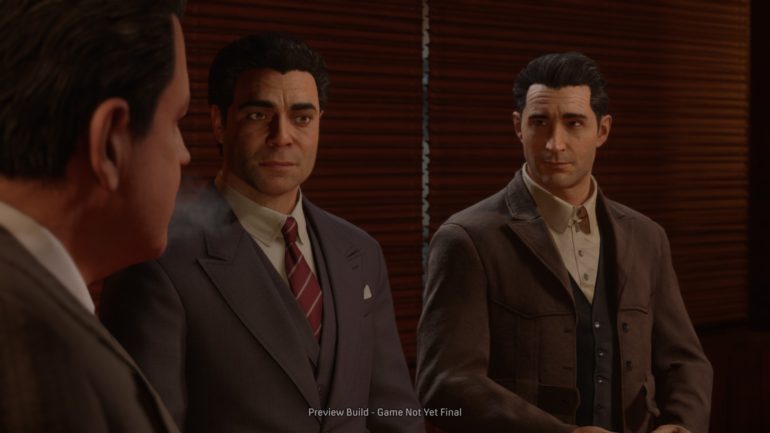 2002’s Mafia was one of the most successful IPs in its time, surpassing what was known to be the best open-world game from Rockstar, Grand Theft Auto III (GTA III). Rather than going for humorous yet witty storytelling like GTA III, Mafia leans on a more mature serious tone than its adversaries; the game impressively replicated the same theme as The Godfather, the critically acclaimed crime film in 1972 directed by Francis Ford Coppola.

Illusion Softworks, now merged to Hangar 13 after becoming 2K Czech, made wonders in Mafia. From a bigger sandbox for people to play in, an expansive narrative, interesting characters to entertaining gunplay, Mafia was highly praised by critics, specifically its PC version. However, the console counterpart held back the game on a technical surface but it still managed to capture the essence of what Mafia had to offer.

Fast-forwarding to this generation, we have seen almost countless remakes from Capcom (Resident Evil II) and THQ Nordic (Destroy All Humans!), even a Tony Hawk’s Pro Skater remake is going to launch next month from Activision. With passionate developers to recreate them to these new standards from the ground up, it’s a way to bring these spectacular pieces back and to give this new generation of gamers a chance to relive these memorable moments.

Mafia has already gotten that treatment since it was announced way back in May, we’ve already gotten a taste of a definitive edition for both Mafia II and Mafia III. The team at Hangar 13 has been hard at work to bring the story of Tommy Angelo back, but with a fresh coat of visuals, better voice-acting, refined gunplay, and overall gameplay.

Mafia is one of those remakes that stays faithful to its original, catering to what the fans of the franchise would love to have without alienating the newcomers to the franchise. And we’re lucky enough to get to play the preview build a month early from its release on September 25.

While this is a “preview build”, there has been a ton of work in polishing Mafia, and clearly shows Hangar 13 wants to avoid the same optimization mistakes they had with the recent Definitive Editions and the launch of Mafia III in 2016.

The demo features the first 5 chapters plus a massive skip towards the 10th chapter — the sequence that was featured during its 14-minute gameplay reveal. While each chapter serves to be as a mission or level in most games, I was able to freely explore Lost Heaven, the fictional city based on the streets of Illinois. The city was alive, it was saturated by non-playable characters (NPCs), vehicles roam the streets at day and night, it never sleeps, and it was amazing. Getting to play Mafia again at this level of detail makes me just want to have Mafia II get that same treatment, not just a remaster.

Mafia plays out almost the same as the 2002 release but not without improvements. Camera movement isn’t a nuisance anymore, driving is a lot smoother as you drive through the streets in a car chase, the gunplay and cover system has also been improved. It feels like a new game entirely.

You also get to relive the moments from meeting Paulie and Sam, getting accepted to the family, going to the outskirts to save a comrade, and meeting the lovely and beautiful Sarah. Then you have major improvements on gameplay, specifically the gunplay and driving. Gunning down enemies with a Thompson is just satisfying, you can easily control the weapons without any issues when you push the right thumbstick from left to right. Then you have the infamous racing sequence where you get to drive a classic 1935 race car. Steering the wheels just feels responsive and smooth, it even makes it cooler when the camera angle shifts fluidly after you make turns.

And in the visual department, you have such a beautiful rework of all assets, giving the characters a clearer distinction between other NPCs, bringing the city of Lost Heaven to life. This is one of the best looking remakes to date.

While my entire experience with the preview build was rather great, I can’t help but notice the sudden shift from 60 frames-per-second (FPS) to 30 FPS in certain areas of Lost Heaven at High presets. This may not be an issue when you don’t have the eye of distinguishing the difference, for those who can, it would break the consistency and pacing of the overall feel of the game.

Considering that this is still a preview build, there’s still a lot of optimizations Hangar 13 can do before they launch the game next month on the 25th.

Mafia: Definitive Edition is a wonderful remake of the 2002 hit as it expands the great world that the original team from Illusion Softworks has done. I can’t wait for the team to further polish the game and play the entire Mafia remake when it launches next month.