Magic the Gathering Kamigawa: Neon Dynasty Spoilers – Everything we Know 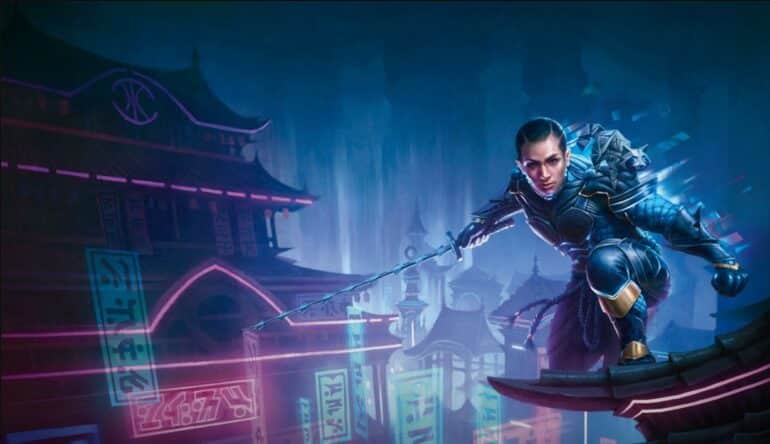 Kamigawa: Neon Destiny expansion, Magic: The Gathering goes back to a long-time beloved plane. As a result, the old Kamigawa Block’s Japanese folklore and fairytale-inspired environment has been replaced by a new one. This is a place where you’ll still find the Kami, Ninjas and Samurai.

However, the Saiba Futurists’ cyberpunk-like technical developments are increasingly fighting for influence. Kamigawa: Neon Dynasty’s story and gameplay mechanics revolve around the conflict between tradition and modernity.

The unexpected technical improvements in Kamigawa appear to be the work of the Phrexian praetor Jin-Gitaxias, which portends doom.

As for the Phyrexian touch on Kamigawa: Neon Dynasty, Phyrexian mana has returned in a limited capacity. A novelty for Magic: The Gathering, the collection includes two Phryexian planeswalkers. The identity of one of the planeswalkers is still unknown. The other is Tamiyo, Completed Sage, depicting the Kamigawa-native planeswalker after undergoing Phyrexian changes, according to Wizards of the Coast. However, there are also three non-Phyrexian planeswalker cards in the set: Kaito, The Wanderer, and Tezzeret.

In Kamigawa: Neon Dynasty, artifacts and enchantments are used to represent modernity and tradition, respectively. Artifact creatures in Neon Dynasty can be repurposed as Equipment thanks to the game’s new Reconfigure system. When it comes to Enchantment, Saga cards are used to create double-sided modal stories that morph into creatures when completed.

Modifications taken from cyberpunk can be found in both categories. This includes equipment, auras, and counters. Modified creatures are those that have been given an additional feature or ability by a player (think cyborg). In order to take advantage of some card abilities, you must have modified creatures.

There are also certain elements from the original Kamigawa sets that make a comeback in this collection. Ninjutsu, the ninja’s hallmark keyword, is returning as a creature type, signifying the ninja’s “stealth skills.” Players can pay a cost to have an attacking Ninja return to their hand, where it can later return to the battlefield and continue to attack.

The Channel mechanic is also making a reappearance. When a player discards a card instead of playing it, the Channel abilities on that card are activated.

Kamigawa: Neon Dynasty continues the notion of legends introduced in the first Kamigawa block. A new deck of cards features the Dragon Spirits. Shrine cards are returning, and there are lots of Kamigawa references.

There are major pushes for Ninja and Samurai in this group. As previously noted, the Ninjutsu mechanic is returning to Ninjas, but Samurai will no longer use the less popular Bushido mechanic. A +1/+1 counter will be added to an Exalted creature each time it attacks alone, thanks to the Exalted mechanic that was previously found on numerous Warrior cards.

A special display border is created for each of the Samurai and Ninja subgenres, further emphasizing the martial arts-inspired concept. Additional cyberpunk-themed touches include a “soft glow” treatment on every rare and mythic rare. Traditional Japanese woodblock art is the inspiration for the ukiyo-e imagery used in Kamigawa: Neon Dynasty’s basic land cards, which include two of each land type. The set’s legendary lands, planeswalkers, dragons, and extended art rares and mythics all have borderless variants. All of the planeswalker characters from the Phyrexian realm have Phyrexian dialects. Phyrexians and Wizards staff members are the only ones who can decipher the cryptic script on the cards.

In contrast to the more common “soft glow” treatment, this “neon ink” treatment can only be seen on these four variants of Hidetsugu, Devouring Chaos, each of which demonstrates a unique foiling technique for Magic cards.

Players and collectors will be thrilled to get their hands on these, which come in three different hues that can only be found in Kamigawa: Rare boosters for the Neon Dynasty Collector: less than 1% of boosters contain a card printed in neon ink. Green ink cards are half as common as blue ink cards, while red ink cards are one-fourth as common as green ink cards.

As of February 10, 2022, Kamigawa: Neon Dynasty will be available digitally in Magic: The Gathering Arena, bringing with it new Wanderer and Kaito avatars, a new Kamigawa battlefield, and two new pets. In terms of physical pre-releases, they begin on February 11, 2022, and on February 18, 2022, the complete set will be available in stores.

In the same way that Fortnite’s Battle Pass rewards players with packs, in-game gold, and cosmetics, MTGA’s Mastery Pass does the same for gamers.

Players must spend 3,400 gems to obtain the Mastery Pass. It is possible to obtain gems by participating in drafts or by purchasing them from the store with real money.

The Mastery Pass has a lot to offer, so if you keep up with your daily missions and weekly wins, you’ll be able to take advantage of everything it has to offer without spending too many gems.

With 90 levels, the Mastery Pass will be similar to Crimson Vow. The good news is that you have plenty of time to reap the benefits of your efforts.

Players can still acquire a modest number of awards without purchasing the Mastery Pass. It is possible to gain 36 booster packs from the Neon Dynasty set and five Mastery Orb to unlock new card styles in the first 78 levels without the Mastery Pass.

The following is a complete list of the Mastery Pass benefits:

The plot of Kamigawa: Neon Dynasty takes place at the same time as the continuing meta-narrative of Magic: The Gathering. That places its start 1200 years after the original Kamigawa Block’s Kami Wars.

It begins with Kaito Shizuki, a cybernetic-enhanced ninja, the protagonist of the Story, a sixteen-year-old high school student, embarking on a trip to track down the emperor of Kamigawa’s metal-armed attacker.

Himoto, Kamigawa’s Kami of the Spark, is now housed in a tanuki robot, and he is a planeswalker as a result. Tezzeret assaulted the Emperor of Kamigawa, who had been a childhood friend of Kaito’s. The Emperor is, in fact, a planeswalker.

She’s been sneaking around as the enigmatic Wanderer since she was first introduced in the War of the Spark set in 2019. Tezzeret is on the plane with the Wandering Emperor when he returns to Kamigawa.

Learn what Kaito finds out following his quiet footsteps with the two-part Magic origin story of his journey, here.

This year, the start of preview season is being heralded by three preorder bundles: a pack bundle with 50 packs, a play bundle centered on the draft experience, and an accessory package with cosmetics themed to Neon Dynasty for your player character. Each has at least one piece of Kamigawa-themed art in the form of a cosmetic. An overview of the three bundles’ contents follows:

The Kamigawa: Neon Dynasty Draft Booster Pack retails at $99.99 USD and these are the contents:

Collector Boosters are the most powerful booster packs available. Kamigawa: Neon Dynasty offers 15 of the most sought-after cards in each pack.

The Kamigawa: Neon Dynasty Draft Booster Box retails at $99.99 USD and these are the contents:

Booster packs contain more than just the newest planeswalker in Magic. Ukiyo-e landscapes draw their inspiration from the natural world around us: