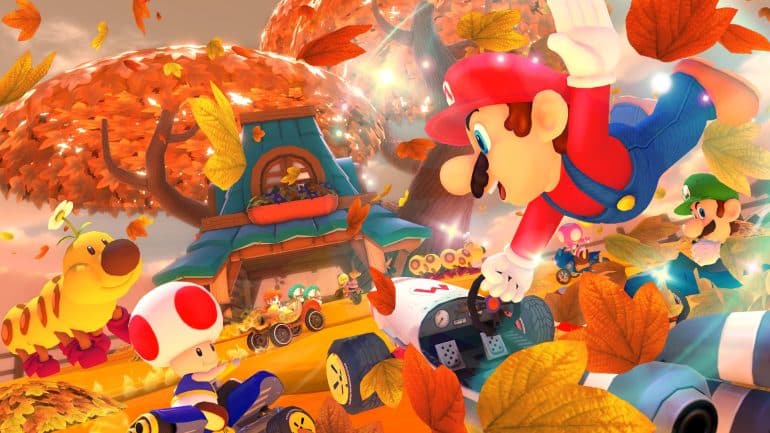 It was now confirmed that Mario Kart 8 Deluxe Wave 3 DLC release date is on December 7, 2022. It was previously announced in September 2022 that Wave 3 of the Booster Course Pass would be released this holiday. They also revealed two of the eight tracks that will be included like Merry Mountain from Mario Kart Tour and Peach Gardens from Mario Kart DS.

Today, the official full list of tracks for the Wave 3 DLC has been revealed. Check it out below:

Gobsmack your rivals as you drift around familiar landmarks and into first place in this England-inspired course originating from the mobile game Mario Kart Tour.

Get your feet wet on this spooky, Boo filled track set on a haunted lake in this course that originated in Mario Kart: Super Circuit!

Careful, sharp turns and bouncing boulders abound on this high-altitude course. Here’s a mountaineering tip: Ramp over a warp pipe to put some wind in your sails!

Leap through the fall foliage and race across massive trees on this course from Mario Kart Wii – just don’t disturb the Wigglers enjoying an autumnal stroll!

Watch out for falling Whomps and Thwomps as you make your way around the stunning sights in this course that originated in Mario Kart Tour.

Chirping birds, bopping Chain Chomps and fields of flowers flourish on this course set in the vast gardens of Peach’s castle from Mario Kart DS! Can you spot all the familiar topiaries?

Hit the halfpipe and bank up the snowy hills on this charmingly festive course from Mario Kart Tour that features massive candy canes and wrapped gifts galore. And … is that a flying sleigh train?

Look up in the sky – it’s … Mario! Rainbow Road winds and twists around multiple planetoids on this celestial course that originated in Mario Kart 7 on Nintendo 3DS.

Mario Kart 8 Deluxe is out now on Nintendo Switch.