Battle it out in battle league with your favorite characters! 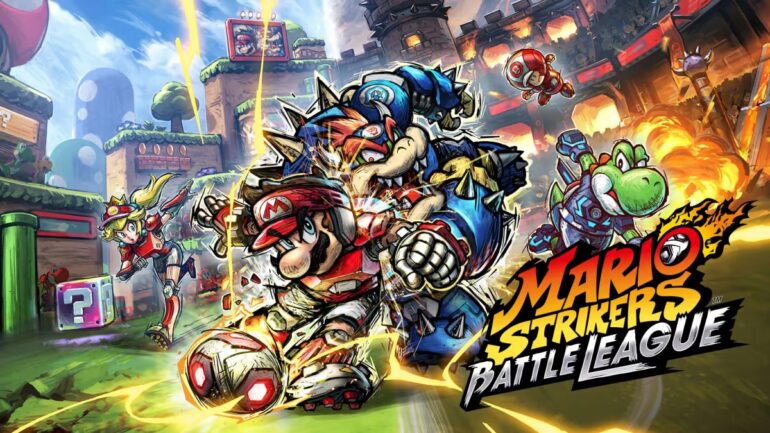 Who are the Mario Strikers Battle League Characters?

The new trailer is in Japanese but it does show how gameplay works in Mario Strikers Battle League. The characters that are involved in the trailer is Mario, Luigi, Princess Peach, Bowser, Wario, Waluigi, Rosalina, Toad, Yoshi, and Donkey Kong.

What Can Players Do During Matches?

Players are able to attack other characters in the game to throw them off or defend them from taking the ball. They also have their own abilities that gives them complete advantage on the field like Rosalina floating on the field with the ball on hand, Peach flipping around with the ball, and more. They could even bump an opponent to the fence to electrocute them.

Are There Teamwork Features In This Game?

It is all about teamwork though as there is a technique that allows them to power up their teammate. They attack said teammate with a hit and instead of getting damaged, they are propelled forward instead with a power up that could increase the speed of the ball. It is a perfect way to crash into the competition and drive the ball towards the goal.

Can We Use Items?

There are items that can be used to deter opponents from approaching the players or protect them from attacks.

What Can the Hyper Attack Move Do?

There is also the Hyper Attack that looks like an ultimate shooting move. It can be done with a glowing ball. When they shoot the ball, there will be somewhat a quicktime event that players need to time right in order for the Hyper Attack to work. Once they get it right, a different scene will play and it shows a rather powerful strike towards the goal.

Can We Dress Up Our Characters?

Each character has their own perks and special abilities. They can also be dressed up with different outfits, accessories, and more. The trailer shows that other outfits and accessories will buff up the character with more stats or change them depending on the item.

How Many Players Can Join and How Does Online Work?

The game can host up to 8 players max in this game (based on what the trailer is showing) and it seems it can be done locally and through online. The other details are possibly about online multiplayer competition, but it looks complicated and could not be guessed without translation. We will have to wait for the official translations to drop, which should be soon.

When Will This Game Launch and On What Platform?

Mario Strikers Battle League launches on June 10, 2022. It will be available exclusively on Nintendo Switch.