It's Waluigi's time to shine! 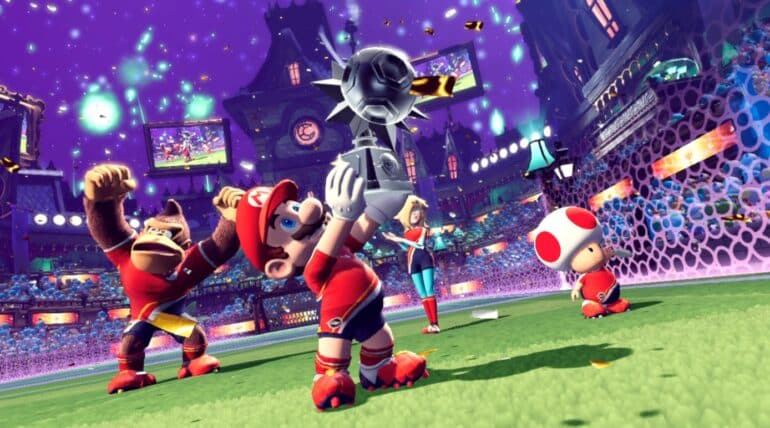 Have you guys ever imagined playing a soccer game with no rules using cartoon physics? Well, I have. Recently, I bought & played the latest Mario game for the Nintendo Switch titled Mario Strikers Battle League. This game is the exact definition of what happens when we merge Inazuma 11 with Super Strikers.

Mario Strikers Battle League is the 2nd installment of the Mario Strikers series. The game is a high-speed soccer game using cartoon dynamics and wacky items to disrupt the offensive and defensive capabilities of your enemy teams.

The game’s roster is composed of some of Nintendo’s popular characters in Mario Universe such as Mario, Luigi, Wario, Princess Peach, Donkey Kong, and more. Using this roster of popular Mario characters, players can form teams of four in which each character has their own specialty in terms of shooting, passing, techniques, and more. The capabilities of each character are defined mostly based on the playstyle of the player controlling them. Fundamentally, I found it at first hard to believe that they have their own playstyle but after playing a couple of hours of the game, I really enjoy the time I played as Mario, Donkey Kong, Princess Luna, and Waluigi.

The stages or rather the maps where players can compete against are very nostalgic as they are some of the famous places that can be found in previous Mario games such as Haunted Mansion, Royal Castle, and even the Lava Volcano. What’s really intriguing is the fact that when the match nearly begins, players from both sides can choose their own personal stage that they want to use and once they do, the stages merge with one another. The stages they pick can be different or be the same. At first, I thought that there would be a random choice button but combining two arenas together is pretty wild if I say so myself.

The controls are very simple and typical. Players must shoot, pass, dash and even slide to get control of the ball. However, this is a Mario game and whenever this character is involved, some things turn into abnormal funny experiences.

In Mario Strikers, players on the defensive side can slide toward their opponent either lightly or in a charge. When they do, they either go into a stunned state or even worse, they get themselves slammed into an electric fence of the stages. Truth be told, I have been slammed and stunned by these wacky mechanics, and well safe to say, I really wish that didn’t happen to me, especially when playing online but hey, that’s what makes this game unique.

Keep note as well players, that when sliding, you use this ability not only for defensive capabilities to block your opponents but also, to boost your teammates’ speed in reaching the ball. Trust me, it really works on numerous occasions.

Similar to Mario Kart, Mario Strikers Battle has battle items that can be used to a team’s advantage to either prevent enemy teams from stealing your ball or use this chance to knock them out for a while and grab the ball for a chance to score. Items such as Red Shell, Green Shell, Bob-omb, Mushroom, and even the Banana peel are obtained by reaching the random dice cube. This makes the setting of the game very challenging especially if your opponents have the items first.

Shooting the soccer ball into the goal concept is simple. Players must time their kicks and choose where to shoot the ball away from the goalkeeper. Either doing normal shots or doing trick shots is one of the ways to go. But never have I expected that the game has a very powerful feature that will work to most teams’ advantage known as HYPER STRIKE.

HYPER STRIKE is an ability in which players must collect a power orb and once they do, their team will have a power-up that can be used for shooting. Each character has their own unique HYPER STRIKE ability like Mario doing a hellfire spin kick that sets the ball into a blaze, or Luigi doing a sonic hurricane that sucks in enemies in a whirlpool of electricity. The use of HYPER STRIKE is really well balanced as its advantages are lined up with its disadvantages. Timing is the key to using them as well as finding their perfect spot to unleash it as well.

Gear customization plays a big role in this game as well. Customization can be done under the customization shop screen. Gears can be purchased and unlocked by earning reward coins through matches. Each gear can increase a specific field in a player’s stats in terms of strength, technique, passing, and even shooting. Keep note that every gear has its own strengths and weaknesses so balancing one’s gear is important for each character you choose.

The game itself has lots of good points. However, there are a few negatives that I personally think should be improved greatly on and one of them is the camera angle. In my experience in playing sports-themed games such as WWE 2K, NBA LIVE, and FIFA, I get the chance to change how I want to view my game but sadly in Mario Strikers, you can’t change it. I wish that they would let players change the camera since it’s kind of a bit hard when playing on hands-on mode.

Another negative or rather detail they should fix is the player lock on the system. In single-player mode, it is really hard for me sometimes to figure out which of my fellow team members I am using. This makes it confusing at certain points especially when I am on the defensive side. That detail should be improved as well.

Overall, the game is very good and deserves good praise. Ignoring the minor mishaps, this new Mario experience will open new possible sports-themed games in the future and I personally hope that happens. For those who want to try the game first, I highly recommend downloading the demo version and experiencing the tutorial to get deeper knowledge on how to play the game.

Mario Strikers Battle League – Review
Score Definition
We tell you, it’s a good game! It’s not average! It might have some problems here and there, but you have to admit it is a “Good” game.
Pros
Cartoon Dynamics + Soccer = Wacky Moments
Very competitive type of game that's worth the enjoyment
stats of each characters are well balanced
Strategy and timing are overall important and was given deep thought for the game
Cons
Changing of Camera Angles is absent
Certain Confusion can happen especially from knowing which character one is controlling
7
Good