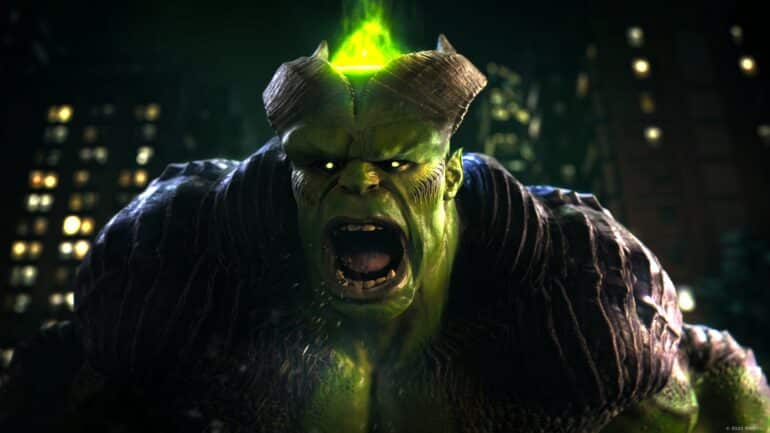 This new video features the gameplay of the most powerful Avenger, Hulk, in the game. While it was advertised that he is controlled by Lilith and got demonized, it seems that at some point in the game he will become an ally. Bruce Banner comes to the side of the Hunter to beat up Hydra goons, demons, and of course to defeat the one who controlled him in the first place.

Hulk is quite different from the other characters in Midnight Suns. He needs to constantly take damage in order to gain Rage that he uses for his special abilities and increase his damage. In doing so, he will need a companion for support. That support will need to heal Hulk if his health is at dangerously low levels and can also generate Heroism. His Rage meter will decrease if he uses special abilities so choose wisely.

If Hulk needs to gain more Rage, he can use various taunt abilities to encourage enemies to attack him.

One of Hulk’s skill cards is Always Angry. When used, it will heal him up nicely and the extra health will be added to his full health, making him a powerful tank. It will completely use up the Rage meter, so use it whenever necessary. It can be upgraded and will drastically improve the stats.

Another card is the Seismic Slam. It hits everyone inside the radius with a lot of damage and it taunts the surrounding enemies too. Great for getting from one location to another and getting the attention of the enemies away from your teammates.

Mighty Blow will forcefully knockback enemies and can direct knocked enemies to nearby ones as well. If the target got stunned, more damage will be added.

Lastly is Hulk’s Heroic Ability called Worldbreaker. As the name suggests, it is an ability that can literally damage every enemy on the battlefield and it means the whole area.

Unfortunately, Hulk cannot be befriended as he can be unlocked much later in the game and in New Game +, he will be available right at the start. He is not available in the Abbey but there is a benefit: he cannot be injured in combat, which means he can go anytime and does not need to rest.