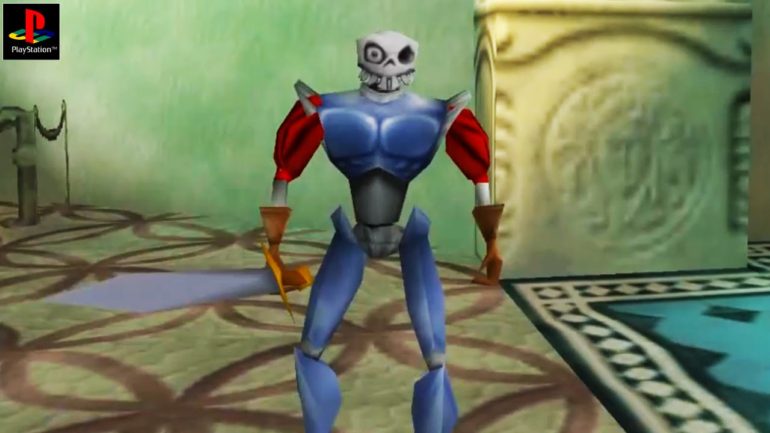 Stories tell of a great battle between good and evil in the Kingdom of Gallowmere. Sir Daniel Fortesque led the army that took down the evil sorcerer Zarok. At least that’s what everyone believes. In truth, Sir Daniel died from an arrow through the eye before the battle even began. Fast forward a 100 years later, and he has a chance to finally redeem himself. Will he finally “live” up to his status as hero?

The game starts immediately after the sorcerer Zarok casts his spell that enslaved the townspeople of the kingdom and resurrected the dead. The newly resurrected bones of Sir Daniel Fortesque begin to stir. He stumbles out of the crypt and ventures outside. After finding a lead on Zarok, Sir Daniel begins his quest for redemption, somewhat determined to set things right.

The controls for the game are pretty much standard back in the day, most of it a mismatch of controls that don’t really make sense in a modern game. The direction buttons move Sir Fortesque. The face buttons do most actions including the basic attack, secondary attack, jumping, and crouching. Equipping a shield to allow the knight to block attacks until the shield breaks. L2 and R2 pan the camera around. Pressing both the same time resets the camera to the back of the knight. When the player equips a ranged weapon, a firefly locks onto a potential target and that’s the direction where the projectiles will fly. Pressing L1 switches targets. And finally, rounding out the controls we have the R1 button that allows the player to strafe left, right, forward and backward. Double-tapping then holding the directional buttons makes Sir Daniel run.

The basic level flow consists of a safe starting area, followed by a series of locked doors that can only be opened by different colored runes scattered across the map. Enemies lie in wait for the player to enter their strike zone. Somewhere hidden on the map, lies the Chalice of Souls. The Chalice allows the player to enter the Hall of Heroes where they can get new weapons and upgraded versions of their current weapons. However, killing enemies isn’t always a simple task. Some enemies require set actions to kill, adding another level of puzzle-solving at each level. Some enemies require a specific weapon to trigger an event. Others require being set on fire first before damage can be dealt.

Some maps change it up by having our knight do quests in order to progress. There are 20 or levels in the entire game, each having its own set of objectives and fail states. I say fail states but in reality, it’s really some of the things that deny the player from getting the Chalice for that certain level. In most cases, it’s the killing of innocent people that this applies to. Then again, most levels have more than enough enemies to fill the chalice. All in all, there are these little things that make each level unique and fun/frustrating to play.

The first thing the player picks up is a short sword, followed shortly by throwing daggers. Apart from the shield and the club, that’s pretty much all the base weapons in the game. The short sword is an all-purpose weapon with a nice reach. It’s a definite step up from Sir Fortesque’s detached arm when he’s holding no weapon. The only thing the arm’s got going for it is that the player can throw it like a boomerang.

As the player collects more and more chalices, they get to talk to more statues in the Hall of Heroes. Many of the statues are friendly for the most part, albeit making fun of the bone knight for being… you know… dead. Once they’ve had their say, they’ll usually part with their prized weapons. Aside from some late-game weapons, most are an upgrade of the player’s base weapon set. Consider it a reward for taking the time to gather up the souls in each level. The only exception being the hammer over the club. Although the club breaks, it is the only weapon that catches fire and is a must-have in certain puzzles.

A green life bar represents the player’s current health, which is hard-capped at 300. Anything over the 300 mark goes into your HP reserves in the form of Life bottles. Depending on how much is inside the last bottle, that’s going to be how much life the player has left. Finding energy vials and standing in the middle of a fountain of rejuvenation restores life and adds to the current store of Life bottles. It is possible to find more life bottles, but they’re usually an extra objective on the map or a chalice reward. Regardless, it is a must find by the end of the game.

If one were to look closely enough, they’ll find stone gargoyles chilling along the walls. Most make fun of Sir Fortesque, but they are known to hand out the occasional good advice. Should the player feel like spending some of their hard-earned cash, they are free to do so with a merchant gargoyle. (There are no other uses for gold, anyway, so why not?) The merchant gargoyles sell basic services like charging up the player’s broad sword and repairing their gold shield. The merchants also sell projectiles for ranged weapons. Do keep in mind that it takes time to accumulate money in this game, and if they’re not farming coins, the player might find themselves strapped for cash when they need it the most. (This coming from personal experience…)

The game does a decent job of guiding the player to what needs to be done. There are books scattered everywhere, offering hints on how to complete a certain objective. Stone gargoyles point Sir Fortesque in the right direction while making fun of him for being a would-be hero. One of the things that stood to me while playing the game is the fact that the game does little to no hand-holding. It’s up to the player to figure things out. It’s both a good and bad thing. On the one hand, players really do feel good figuring out how to solve a puzzle. Unfortunately, it also opens up the possibility of frustrating moments where some players cannot remotely work out the problem. It’s a double-edged sword, and I consider this one of the staples of 90’s gaming.

For a PS1 era game, the background music and the sound effects are particularly sharp. I don’t know if it’s because of the emulator or maybe it’s just something I never really noticed as a child playing this game. The music has this light-hearted tone that excites for the most part. It’s a bit hard to describe especially when there are spooky elements like skeletons and zombies in the mix. By contrast, the cut scenes do their best to come off as creepy and unsettling. But to be honest, I think that’s one of the things that hasn’t aged well in the last 20 years. As for the graphics, it’s that really nice polygon style that doesn’t try so hard to look realistic. The villagers, in particular, are some of the goofiest looking designs in the PS1, and yet there is a certain charm to them that comes from the design choice.

As for the story itself, it’s pretty much self-explanatory. No dramatic changes in the middle of the campaign, and certainly no revelations either. It’s all about going from place to place, purging evil where it lies, while hot on the trail of a mad sorcerer bent on subjugating the whole realm. It’s as straight forward as that. What’s not straight forward is the order in which the player can take on the levels. Very early on, the paths diverge and the player gets a chance to enter other parts of the map that may or may not be part of the critical path. Though all paths lead to the same destination regardless, it was quite enjoyable to get to choose the next location.

Now’s this the part of the article where I rave about the small details of classic gaming that really get under my skin. For starters, I’m almost always at odds with the camera. During most level runs, it’s an annoyance. There are some sections of the map where the camera goes all classic Resident Evil and that throws me off my game. Other times, the camera catches elements of the scene that block vision, leading to some awkward encounters with nearby foes. But by far the most annoying thing about the camera is the fact that it seems hell-bent on fighting back user input when all I want to do is orient the camera in a certain way. The most effective way to fixing this is standing still and pan the camera around. But who has time to stay perfectly still and adjust the camera every few seconds!!? How in the world did I manage to tolerate this as an impatient child?

Don’t get me started on a certain boss battle. I was fighting with the camera so much there, I swear it’s like fighting 2 enemies at once. And there’s only one enemy I can do damage to, and another frustrating foe that’ll probably keep fighting me till the last moments of the game.

Speaking of frustrating, did I mention how sloppy I am when it comes to this game’s platforming. It may be just that I’m getting old, or I’ve just become accustomed to modern games’ take on easier platforming, but I don’t remember platforming being this frustrating. So, here’s the thing – the whole double-tapping the analog sticks… it doesn’t work half the time. I can try to be precise as possible with the whole tracking of the shadow under the model. But If you don’t build up speed for some of these tricky platforms, It doesn’t matter. Because of this, I had to give up on one of the chalices in one of the later levels. It’s just not worth it.

All in all, I get why this game is an all-time classic. And yeah, given enough time, I too can make those platforming segments more easily. The same goes for the camera, I suppose. This is a very awesome game. It’s pretty much on par with some of the better platformers of that era. But I can easily see why this game deserved it’s own remake. As for replay value, I think that mostly depends on how many chalices you’ve collected. There’s a good 6-8 hours worth of content in this game, minus the number of failed runs, of course.

I may have the occasional complaint here and there, but let’s be honest here, if I didn’t enjoy the majority of the content, I wouldn’t have bothered collecting the chalices and going after more challenges. The truth is, I died a fair number of times throughout the play-through. It was frustrating, for sure. But each death meant that the next run I made on that level was going to be more doable than the last. I think that was a factor in my enjoyment of the game. Plus the nostalgia, don’t wanna forget about that.

That about wraps it up for this Retro Review. If you’ve made it this far, thanks for putting up with my rants over old school controls.