Moonlighter Review – Fight For Your Merchandise

Take a lesson into basic Economics and Capitalism, as since you are in charge of Moonlighter, you are also in charge of your goods’ prices. 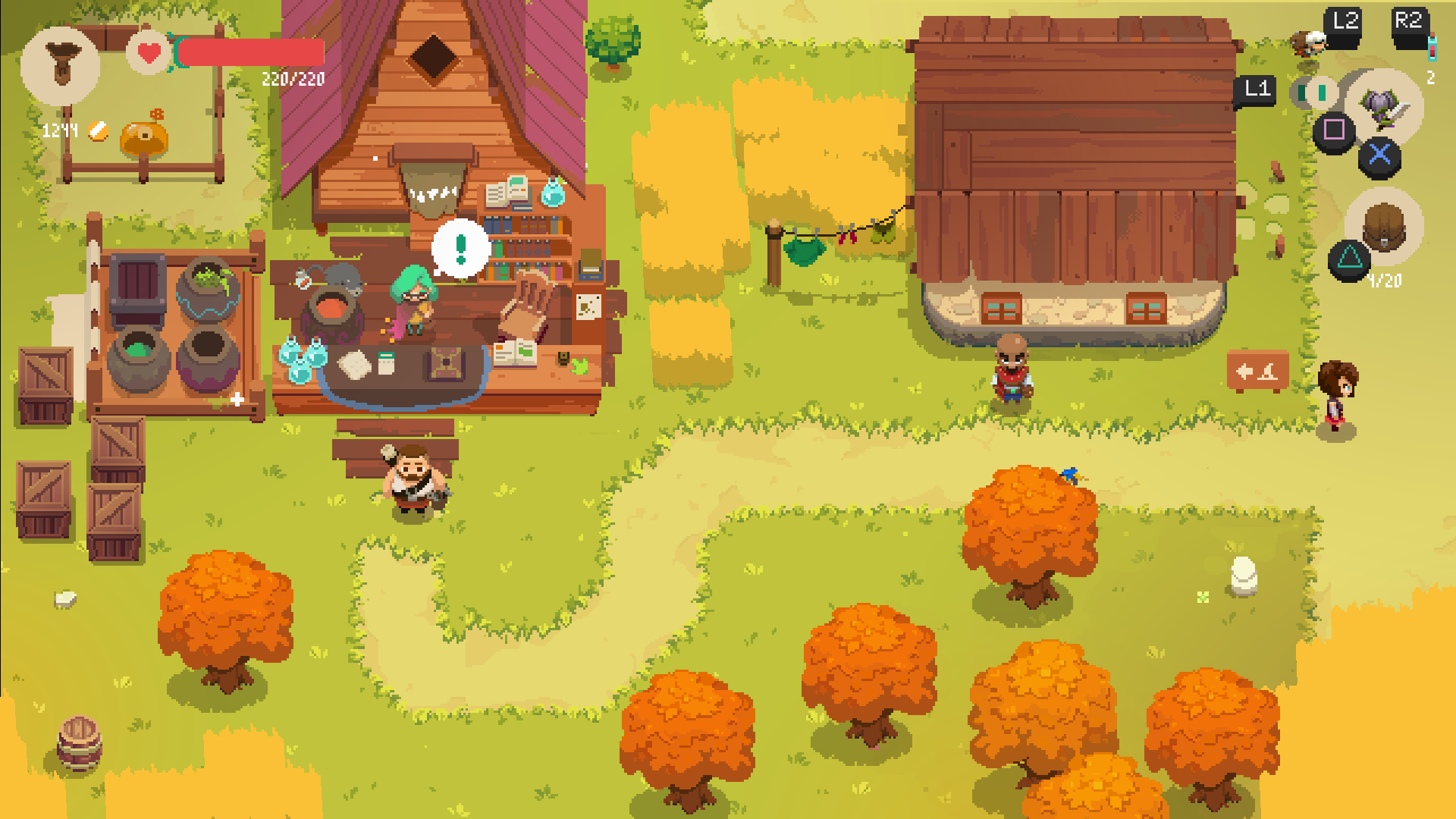 The son of a merchant is young, curious, and extremely rebellious—but all budding adventurers are. Will, the dashing white-haired shopkeeper has found himself craving for the knowledge of the town’s secrets while struggling to maintain the responsibilities thrusted upon him to continuously run his family’s store.

But why should he choose to limit himself to one job description? When he can be a Merchant by day and a Hero by night.

Moonlighter is your regular dungeon crawler with a splash of shopkeeper simulation. From the title of the game itself, Moonlighter is the name of Will’s store, and although dungeon crawling has the nostalgic and exciting gameplay and graphics likened to The Legend of Zelda, it’s the shopkeeping that brought the charm.

Take a lesson into basic Economics and Capitalism, as since you are in charge of Moonlighter, you are also in charge of your goods’ prices. The old but wise man that looks after Will is the designated game tutor that gives you a simple idea of how supply and demand works and how you can use it to your advantage—whether you stay in fixed price tags, or choose to price higher or lower depending on the day. It’s a simple but gives you a quintessential idea of what it is to be in Will’s position. As I have mentioned and implied in my past reviews, it’s the experience that I value and the unique aspects I can take away per title, and Moonlighter’s “Best of Both Worlds” scenario is an endearing and refreshing outtake to a dungeon crawler. 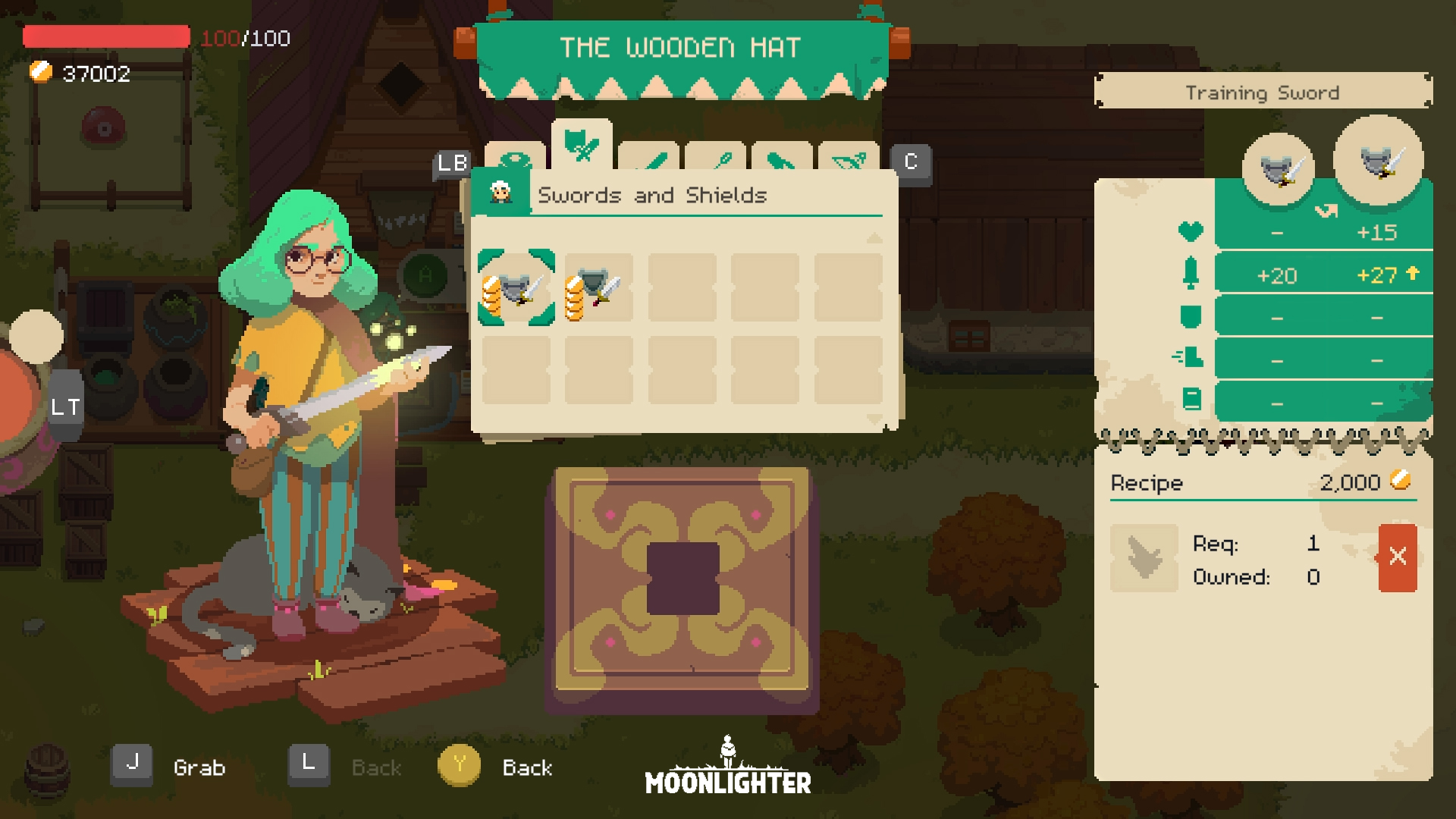 The game, as you will notice then, revolves around money. You go into dungeons, fight monsters and get loot, then sell them in your store to gain more money to spend on armor, weapons, and an ample amount of potions. As Will is most likely the only thing creating an economy for the town, you are also tasked to not only improve the interiors of your shop, but also the exteriors of the town by unlocking certain stores (that will also, conveniently, benefit your adventures). It brings you around and back again, but it’s the kind of repetition that does not bore you—it, in fact, keeps you hanging around more.

Dungeon crawling is as regular yet exciting as I have mentioned, but it is also where the main plot takes place. You search around the dungeon to read conspicuous notes scattered around the levels of the dungeons. Each level progression will then lead you to that dungeon’s boss, which you will need to fend off to unlock another dungeon. There are four dungeons, all of which will contain a key in the end that will assist you in unlocking the fifth gate—the center of the town’s mystery and Will’s curiosity.

Here’s where the problem lies on my end, and that I hope the developers may address: although the game was wonderful, experiential, and beautiful—I could not complete the experience as of writing this review. Though they have mentioned on their Twitter page of the bugs that persist within the game, it is undeniably frustrating for the game to timely crash during my entering of the fifth dungeon. The build-up of the mystery from the pages I have encountered in the dungeon is then put on a cliffhanger in my mind and one that I hope to climb away from. It’s also one that I cannot expand upon writing, as it was a lore I had yet to learn, but it was one that was intriguingly setup. 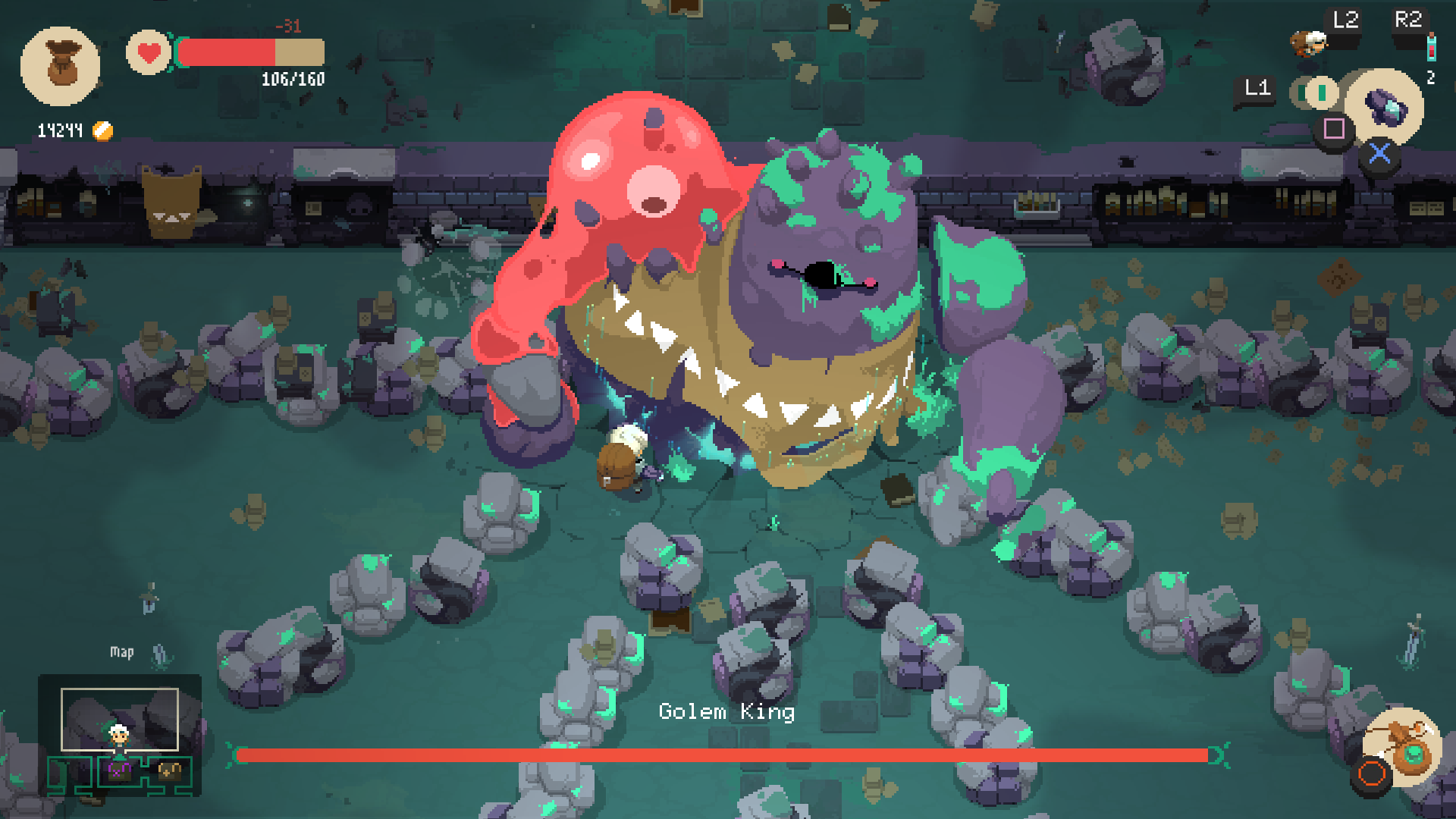 A game that’s built with charm and an amazing concept disappoint when it is plagued with bugs that many will have to tolerate while waiting for an update. And other than this setback, I had found no majorly negative aspect to say about Moonlighter. It is beautiful and a game that’s worth a cent, if only it gave more time to work out its kinks.

Moonlighter - Review
Score Definition
We tell you, it’s a good game! It’s not average! It might have some problems here and there, but you have to admit it is a “Good” game.
Pros
Nostalgic, 8bit graphics and gameplay
Hero at Night and Merchant by Day concept
It’s highly addicting and the plot itself is intriguing
Cons
Bugs — I crashed. Before the final location. It’s frustrating.
7.2
Good