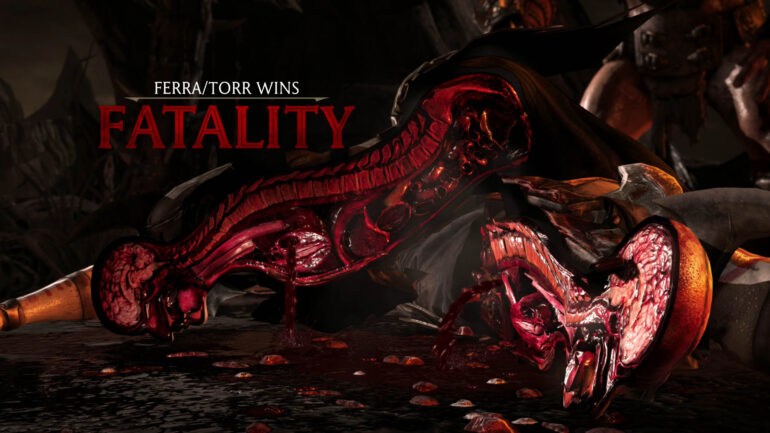 Mortal Kombat was one of my favorite games growing up, specifically MK3. Before MK3, the only other fighting game I had was Super Street Fighter 2 and MK3 had the more edgy set of characters. My dad was fully aware of the ESRB rating at the time and he still got me an M rated game at the age of six. He might have bought it for me but I know full well that it was really for my uncle and him. How else would you explain forcing us to take our afternoon naps while they played Mortal Kombat?

Anyway, the main draw of the game has to be the very bloody and very inappropriate for a then six year old, Fatalities. And here is the list of my top 5 favorite fatalities. I need to say that these are the fatalities that I myself have seen or executed. This means that any Fatalities from MKX won’t make this list as I have never played the game. Oh, this will also only feature Fatalities. Things like Friendship, Animality, and Brutality won’t be on the list. Even the ever-so-funny babality will be excluded. So here goes:

How else am I suppose to start the list but with the fatality that started it all: the infamous spine-rip from the original Mortal Kombat. This fatality was one of the reasons why we now have the ESRB ratings. The first time I saw this at the arcades, I was at awe. I wanted to replicate it. I spent a good chunk of my allowance just attempting to do it. I embarrassingly spent most of these attempts doing an uppercut during “Finish Him” hoping that the spine rip will suddenly trigger. I spent the next few days talking to my friends about the game and tried to have them teach me how to do it. There was no way to grab move sets from the internet back then, especially in early 90s Philippines. I will always remember the first time I pulled off the Forward, Down, Forward, High Punch that ended with the spine rip.

A good part of my childhood was spent playing MK3 with my uncle and cousins. As rowdy boys, one of our favorite Fatalities was Sindel’s. This is where she shouted so loud that your skin melted off of your body. It was very embarrassing for the player at the receiving end. Not only was he defeated by a female character, he also was a recipient of the “Kasab.an ni mama” taunt. This taunt translates to “You got scolded by your mama” since Sindel was a mom-type thing and she basically screamed you to death.

Noticed a pattern? Most of these are from the early titles but that is what sticks to me the most when I think about Mortal Kombat. Cyrax was arguably my favorite character of the MK3 roster. I liked ninjas and robots and had to fight as a Ninja Robot was just the best thing ever. Sektor was cool and all but Cyrax felt craftier with his bombs, net and teleport abilities. The Fatality I use the most would be the Helicopter Fatality. This is where Cyrax spins his head so fast that his metallic dreads become lethal blades. He jumps up dives head first into the opponent leaving nothing behind except entrails.

This fatality makes the list simply by how it makes guys feel.  Noob and his clone grab the poor helpless soul from each side and starts pulling. The first to give way is the groin area. This part of the fatality can make anyone grab their crotch in agony. There are other fatalities out there that go for the groin like Kung Lao’s buzz-saw fatality but this one just feels a little too real especially for those of us who accidentally got thrown into a split (or intentionally, no judging) remember the traumatic experience and imagine it at a higher intensity.

Before we go to my number 1 fatality, I want to talk about a fatality I absolutely hate. Here is my dishonorable mention:

This is the Bang Bang! Fatality from MK9. While this was a wonderful fatality for the Joker in the MK vs. DCU game, it just does not fit with Shang Tsung. A great and powerful sorcerer killing someone with a gun? This just did not sit right with me. If you liked this fatality, I’m sorry but I think we can’t be friends.

As bad as the first Mortal Kombat movie was, you would have to admit that it was the best video game-based movie at the time. It also introduced us to the Mortal Kombat theme and gave the big bad from the first Mortal Kombat game a killer catch-phrase in “Your Soul is mine!” Every time you pull off any of Shang Tsung’s Soultaker fatality across all the versions of Mortal Kombat, you just can’t help but shout that catch-phrase. Nothing shows complete dominance over an opponent then stealing their soul after beating them to death.

These are my favorite MK fatalities of all time. This is a list of 5 and is mostly based off the characters I played the most so your list will be vastly different from mine. If it is, as it most likely will be, let us know in the comments bellow and tell us why. We are still looking for promising writers. Who knows, maybe you can wow us. J