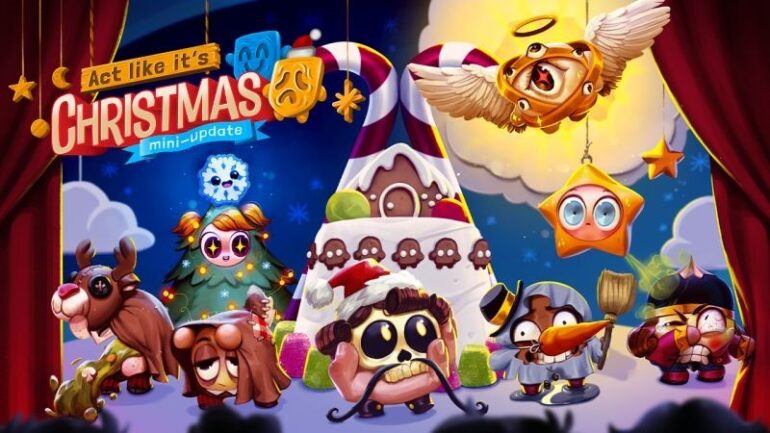 Developer Those Awesome Guys want to wish all gamers Happy Holidays by the only way they know how: breaking friendships in their game, Move or Die.

The ‘Act Like It’s Christmas Mini-Update!’ includes five new characters including an over-dramatic Shakespearean nerd and a Bible-accurate angel of furious divine judgment. All these characters are making their debut today. On top of that, there is a special bonus character – the snowflake Deepflake who will be rewarded for free to players who enter an online multiplayer match between December 22nd, 2021 and January 5th, 2022.

But of course, it’s the gift of giving and in this case it’s for players who get a copy or three for your future frenemies. Both the Steam and PlayStation versions are 75% off S.R.P. during this holiday sale time. (Note that the PlayStation runs through January 19th, 2022.)

About the game: (from the Steam Page)

20 seconds, constantly changing mechanics and a lot of yelling. These are the keywords that perfectly describe a round of Move or Die, the 4-player friendship ruining party game where rules change every single round. Slap your friends’ controllers out of their hands while playing on the same couch, challenge players online from around the world or pretend to practice offline with AI bots. Select what game modes you want to play from an ever-growing list of developer and community-generated modes, each with their own outrageous mechanics and level design crafted to promote hours of good old friendship-ruining fun.

Play online to gain XP and level up, unlocking awesome characters and game modes in the process, or try to work your way up the daily challenge leader boards where players go against AI bots in survival-like matches. As its name suggests, Move or Die forces players to take action. In fact, not moving literally makes your character explode. And, with just 20 seconds per round, Move or Die is a quick game to pick up, but a hard one to put down.