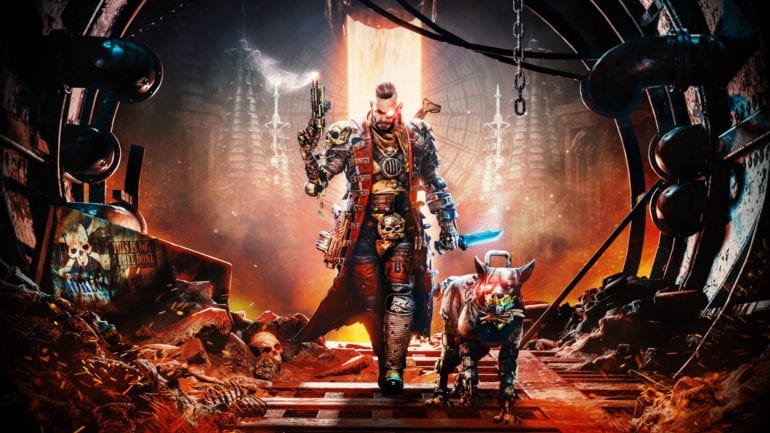 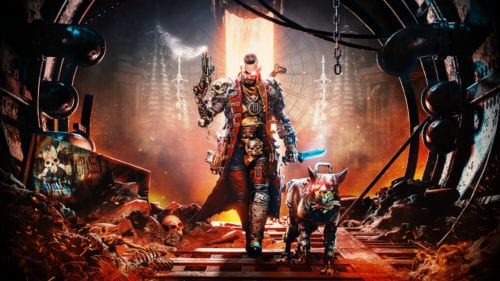 The life of a bounty hunter isn’t all that’s cracked up to be. There isn’t much of a living to be had in between dodging bullets and dealing with the powers that be. If that’s not bad enough, chances are your mark is under the protection of one of the hundreds of gangs that infest Necromunda’s criminal underworld. But, you know, every once in a while, there comes a contract that’s too good to pass up on. One that promises to set you up for the rest of your natural life. The big one, they say. Is it worth starting a war over? Probably not. But if I’ve learned anything from Necromunda: Hired Gun it’s that there’s no problem that can’t be solved with a grappling hook on one hand, and a fully kitted Autocannon on the other.

On paper, Necromunda: Hired Gun sounds like your garden variety fast-paced shooter with Warhammer 40K weapons and a loyal dog companion to chew the ever-living hell out of anyone unfortunate enough to cross your path. But look a little deeper and you will find a surprisingly well-constructed combat system and interesting use of movement mechanics.

On top of that, there’s a gameplay loop that compels you to acquire as many credits as you can get your hands on, in the most efficient way possible.

Necromunda: Hired Gun’s main campaign is spread throughout 13 chapters. In between missions, the player returns to Martyr’s End. While in the safe zone, they can buy new weapons, upgrade their augments, or pay money to turn your Mastiff into a new Terminator. Information gathering usually listening to either the Snakebite Priestess, the Dome Runner, Jado, or Kal Jerico. Once you’ve heard everything they’ve got to say, you will be pointed to the location of the next mission.

On top of the regular chapter missions, the mission terminal also hosts a myriad of side missions whose sole purpose is to be an additional source of income. Augments are damn expensive, especially the tier 4 ones. From my experience, the augments are the real game-changers. Without them, the game just devolves into a shooter without much else to offer.

When it comes to Chapter missions, they are usually lengthy treks with multiple objectives to do. Navigating the map involves a lot of jumping, dashing, and liberal use of the grappling hook. A lit beacon indicates where the player needs to go. Which usually ends in yet another kill chamber for the player to get past.

In combat, the player can utilize wall running to quickly close in the distance. This mechanic actually serves several purposes. The Auto sanguine passive starts kicking in immediately. This handy perk allows the player to regain health the more damage they inflict on enemies. It is also most effective at close range. Performing a wall run activates aim assist, allowing the player to look in a general direction and hits shots while on the move. And finally, performing movement tech breaks the enemies’ tracking. Essentially buying the player a few moments of reprieve.

Finding a good balance between weapons and augments can and will significantly lessen the time it takes to kill enemies. Using the Blast augment, for example, on shielded enemies will instantly vaporize that layer of defense. Leaving the helpless foe at the mercy of your bolter. Tanky enemies like the Ogryns and Ambots take a helluva beating before going down. The Crush skill deals a significant amount of close-range damage and stuns locks the enemy. Again making clean-up a breeze.

Oddly enough, what I found lacking was in the variety of enemies the game threw at me. There are the regular human enemies. Their loadouts depended mostly on the faction they belong to. There are specialized enemies like the Eschers. Basically, witches that tend to shoot elemental attacks, who also tend to teleport towards my blind spots. Ogryns and Ambots are bullet sponges all the same, but the bots generally soak up more damage than most.

My biggest disappointment lies in the fact that boss-type enemies don’t do anything besides running from point to point and occasionally firing their weapons. They have the largest health pools in the game. So much so that I can literally empty out my guns and they would continue on like normal. No change in behavior, no second stage (for the most part). The boss fights felt tacked on last second. I’m sorry to say, but you won’t be doing much besides walking up to them and praying to the Emperor that you heal faster than they can deal damage to you.

At the end of the mission, the player is graded with style points. For the most part, it involves performing finishers one after another. (I suspect augments play a part in that as well.) The player is also graded by how many treasure chests they opened. They are often hidden in hard-to-reach places. The only hint the player gets is a subtle humming sound that indicates a chest is nearby. Using the grappling hook usually gets me to where I need to go. But there are some who will require the player to think outside the box for them to be found. And finally, zero deaths will guarantee the most money for that mission. (Not accounting for the sellable loot collected throughout the mission.)

Being set in the Warhammer 40K universe, expect there to be dark visuals and near hopeless settings. The Hiveworld of Necromunda is a literal meat grinder where very few can remain unscathed by its constant demands. What remains untouched are the long-forgotten secrets of its glorious past. Which are highly sought after by everyone. The game generally goes on without background music. That is until it’s time to kill enemies. The silence breaks and rock music start blasting on all cylinders. It’s hard not to get caught up in the pace but it’s the perfect complement for the action that’s happening on screen.

One thing of note when it comes to voice acting. Both the male and female actors say the say exact same lines, and the delivery is as hard-boiled and gritty as you can possibly imagine. I actually found it amusing.

The story of Necromunda Hired Gun starts with the player’s character heading out to execute a routine bounty. But unfortunately for them, they get caught up in something better, and deadlier. A little while later, all hell breaks loose. The bounty hunter, the sole survivor is now marked for death. What follows is an ever-increasing escalation of violence between various gangs and the bounty hunter. With no hope of walking away, the hired gun has no choice but to go straight to the heart of darkness, and hopefully find a light on the other side of it all.

The moment-to-moment fights are probably my favorite part of Necromunda Hired Gun. Unfortunately, that’s where the majority of the issue with this game also lie. Assets annoyingly load in mid-fight, and playing it on a base PS4 means that performance goes at a snail’s pace during those times. Thankfully, it lasts only for a split second. It just happens so often that I practically expect it to happen AT LEAST once during a fight.

The Mastiff companion comes in very handy as it provides wall hacks for as long as it is active. The problem is, the Mastiff just pops into existence, takes a couple of seconds lining up to the nearest enemy, and then it attacks. I would’ve liked if my companion jumped from behind my back to offer aid, at the ready to chomp at my enemies to death. But sadly, that isn’t the case.

As of patch 1.03 on Playstation, Necromunda seems to be in a pretty good place. Many of the issues surrounding its initial release have been addressed. It may still be subject to the slow frame drops and occasional crashes, but I suspect it has more to do with the Platform than anything else.

As a whole, Necromunda: Hired Gun is one of the more enjoyable shooters to come out this year. Unfortunately, minor performance issues on the PS4 prevent the title from truly shining. I also draw issues with how boss fights play out, and among other concerns. Other than that, it is a great game to lose yourself in for short bursts. So, it’s a good thing that it doesn’t require the player to stick around longer than necessary.

Though there is little reason to hang around after the campaign has concluded, there is a certain satisfaction to get gained from acquiring all the upgrades available in the game. If only to become the most powerful Bounty Hunter this side of Martyr’s End. 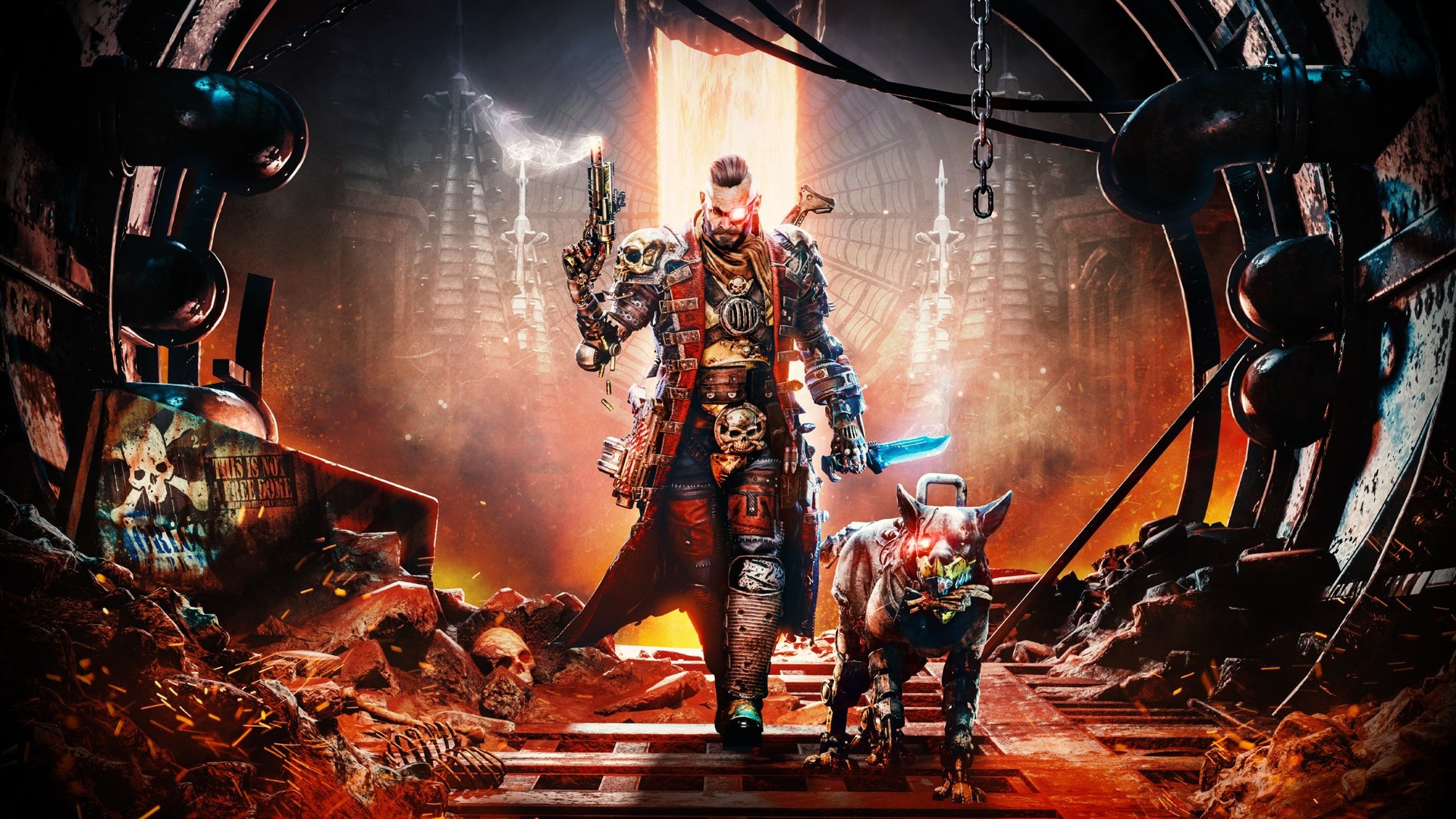 Necromunda: Hired Gun – Review
Score Definition
When the issues of a game are rolled and stomped by its greatness, then it’s something to invest on if you have some spare.
Pros
Fast paced action
Highly customizable bounty hunter
Rewards aggressive and stylish plays
A good variety of side missions
Cons
Inconsistent support from Mastiff companion
Inconsistent game performance
Not much to do besides earning money for upgrades
Uninteresting boss fights
8
Great