NEO: The World Ends with You Demo – Preview

This prologue hits all the right notes 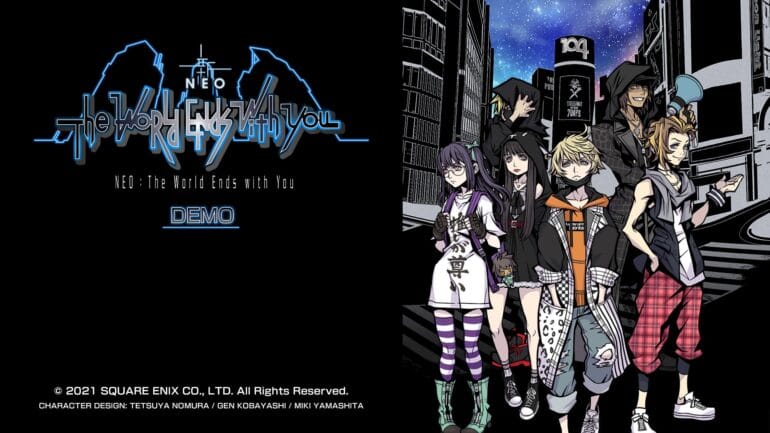 NEO: The World Ends with You is nearly upon us, and with that, Square Enix has released a demo for us to try out. NEO is the sequel to the 2007 game The World Ends with You. The main differences between the games is that NEO: TWEWY is in 3-D and the game lets us control up to 4 characters at once. This demo is actually more of prologue since all progress you’ve done will carry over to the full game once it’s released.

The demo starts with protagonist Rindo Kanade meeting up with his friend Tosai Furesawa (aka Fret) at the famous crossroads of Shibuya. The pair was just finishing lunch when something extraordinary happened – they witnessed was a fight between humans and creatures known only as “Noise”. For one reason or another, they got caught up in some insane “game”. The Reapers’ game, to be exact. But being none the wiser, Rindo and Fret agreed to participate in a game that could very well cost them everything. I would usually end that sentence with “cost them their lives” but it seems the first condition of being part of the game is that one should be dead. Small details, I’m sure.

Being dead is not the only revelation the duo must come to terms with. As informed by Shoka Sakurane, a Reaper who’s taken a keen interest in Rindo’s group, winning is the only way to escape their current situation. They must also ensure that they must not be in last place. It was never implicitly mentioned why but it’s safe to assume that there are fates worse than death waiting for the losers.

Shoka is just one of many colorful characters the team will meet during the competition. In time, the young upstarts begin to draw the attention of other teams. The ones in the demo did leave quite an impression as they were making their intentions clear. Call it intimidation or what-not, but I guess you don’t survive this kind of game by being nice. It’s not all bad though, the notoriety did draw the attention of Sho Minamimoto – an obnoxiously smart, yet invaluable ally. Together, they make up 3/4 of The Wicked Twisters team.

The Reapers’ Game runs for 7 days. At the start of each day, participants receive a text message containing clues leading them to various points in Shibuya’s districts. The clues act as puzzle pieces, and when pieced together, they trigger a boss fight. Beating the boss produces a pin that’s supposed to be a mark of victory. It only counts if someone picks up said boss pin. A bitter lesson our heroes learned all too late.

To help them solve the riddles leading up the boss fight fight, Rindo and Fret use physic powers that they somehow got from being dead. They can listen to peoples’ thoughts and acting on that information to locate objectives. Fret also has the unique ability to ‘remind’ people of things they’ve forgotten. This involves a minigame wherein the player rotates thumb sticks around until an image is made clear. Sometimes they’re easy as heck, but others can take forever. Either way, it’s a decent way to diversify the events of the day.

Combat in NEO: The World Ends with You, particularly in this demo, is very active. Think Kingdom Hearts but a lot more emphasis is put on skills and magic. Pins are required to pull off attacks. Each pin corresponds on an input button on the controller. The attacks chain together seamlessly. I haven’t found one combination that I would classify as ‘bad’ but with 300+ potential pins to collect, I’d imagine there would be some suboptimal combinations.

Tapping the input initiates the attack. Some of them apply a damage over time, while others require you hold the button down for a charged attack. Chaining combinations is not necessary a must at this stage in the game, but it feel good when everything comes together and the large damage numbers start popping up. Also, note that there are no individual health bars. The team shares one long life meter, and the only consequence from taking hits only results in getting stunned, potentially breaking a chain attack. When everything in sync, however, players can really unleash a Smackdown like no other. So you’ve got every reason to stay clear of enemy attacks.

To be honest, the demo took a lot longer than I expected. Clocking in at around 3 hours. And if you’re wondering if you can farm levels, the answer is ‘No’. Square Enix set a limit to the number of pins we can collect, and the level cap was set to 15, so there is no way we can be overstay our welcome just to get overpowered when the game comes out.

Unfortunately, we didn’t get an introduction to the 4th member to the team, Nagi. It might have been a good call to hold off on that one. But, I can’t let slide the fact that we didn’t get to use money at all. From trailers, we are supposed to use it to get cosmetics and on food that’ll raise the team’s stats. I didn’t see any of that. It’s a small complaint, one I can only assume happened to dissuade people from farming the hell outta the demo.

All in all, I had a blast playing the demo. The visuals are some of the most stylish I’ve seen since Jet Set Radio. The anime art style truly shine here. Complimenting it are the nonstop urban beats that conjure images of DJ’s busting out jams. Only this time, the songs are stuck in your head.

The game did tease a lot of what to expect from the story. Namely suggesting the fact that we may be capable of changing the events that occur during that 7 day span. That got me interested. There’s also the other characters that will be appearing in the game. From appearance roster alone, I can already tell that this game will give 100 hour RPG games a run for their money. (That’s also counting the amount of collectibles in the game.)

If this demo is any indication, NEO: The World Ends with You will be as iconic as the game that proceeded it, if not more. The jump into the third dimension did wonders for the gameplay and the story was always going to be solid. I’m excited for this one.

You can also find more information about the game here. The demo is still available up until the game’s release this July 27th, 2021. It comes out on PS4, Nintendo Switch, and PC.