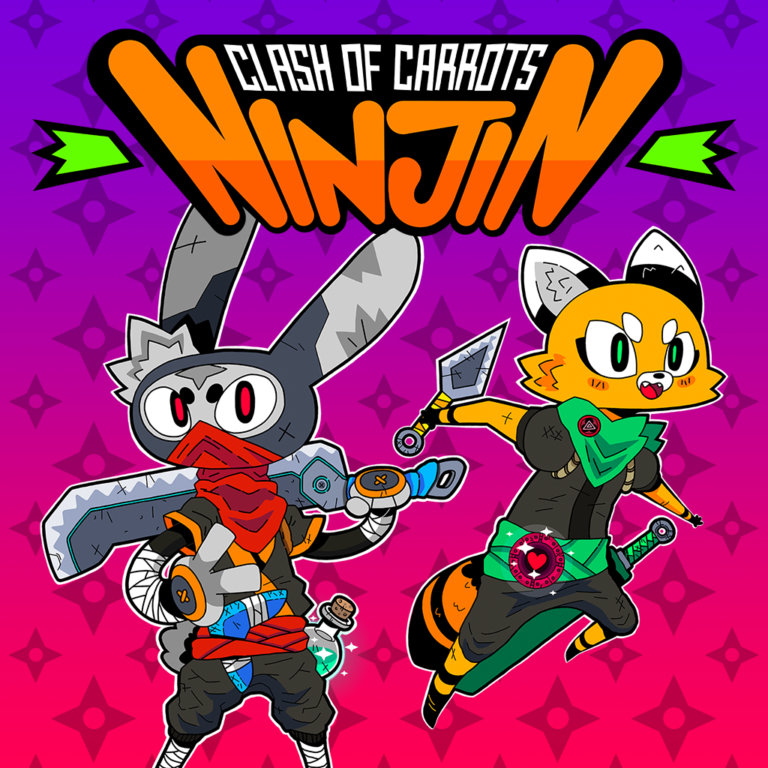 Usagi Village is just another peaceful village in the mountains. Most villagers spend their time tending to their precious crops, mostly carrots. Why carrots, you ask? The funny thing is, these lovable sticks of goodness are more than just a food source for these villagers. It also serves as currency. And it would be a shame if an evil shogun decides to invade and take said carrots. But worry not, for this quiet village houses its own force of ninjas. Yeah… *facepalm* 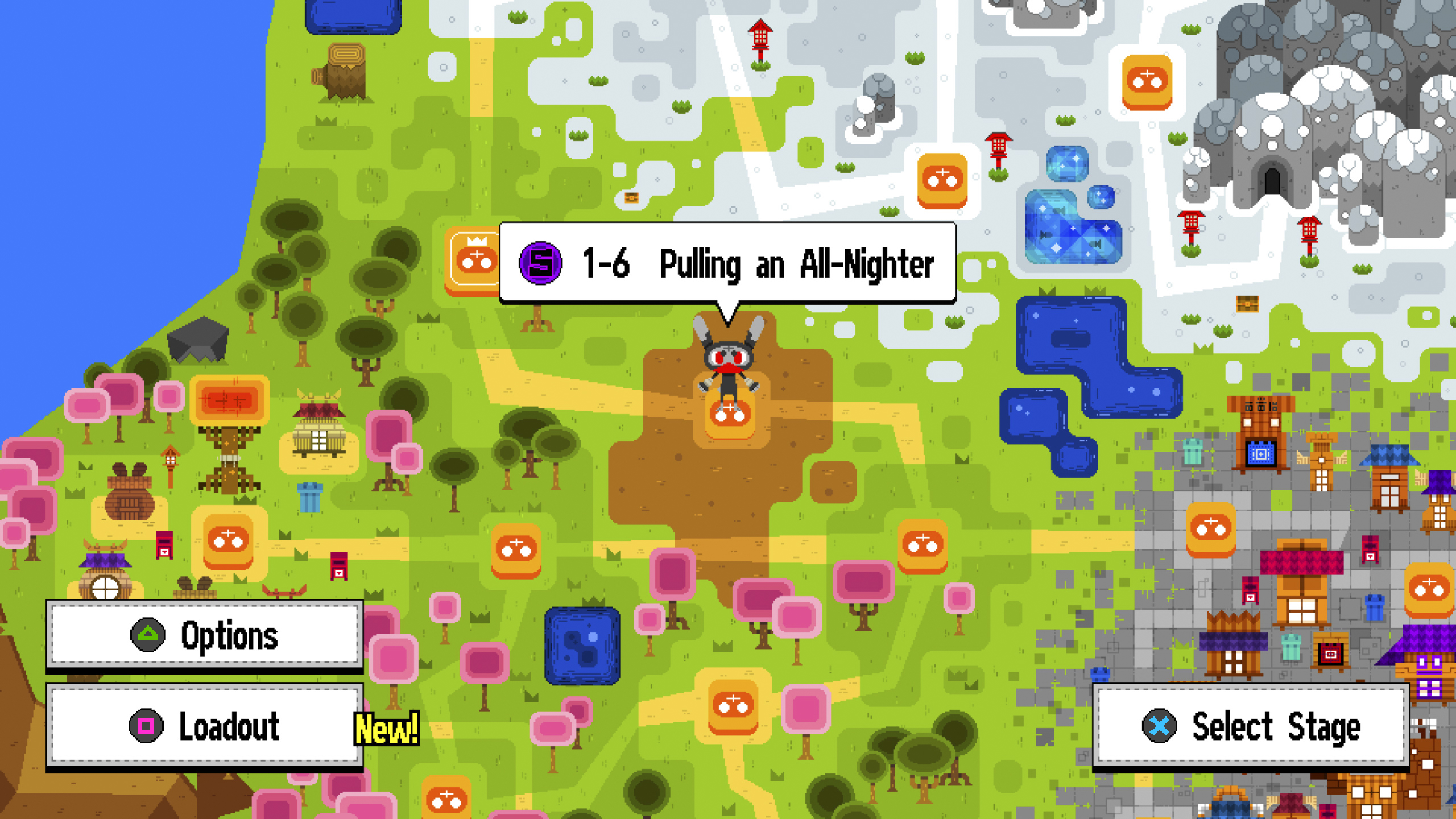 Ninjin: Clash of Carrots is an anime-inspired beat-em-up with some shooter elements. Players take on the role of the titular hero, the ninja rabbit, Ninjin. An option to play as Akai, the ninja fox, as alternative or second player in co-op is also present. The ninjas must take back the harvest stolen by Shogun Moe and his army. Prepare for a lot of running, slashing, and throwing.

A stage in Ninjin typically starts with a monologue from the stage boss. Players then continuously run to the right of the screen – with enemies emerging from either the left or the right of the screen. Unfortunately, melee weapon can only slash at enemies to the right of the player. To combat threats coming from the left side, the player must use throwing weapons. When things get too dicey, the player can use dash to quick dodge attacks. Additionally, the player enjoys a brief moment of invulnerability while dashing. By pressing the melee and dash button at the same time, the player performs a dash attack in a certain direction. The goal is to survive 10 waves to advance to the next stage.

There are no healing items in the game. The player must string combos together in order to receive health after every wave. The counter starts at 10 with the player receiving +3 health. Potential healing stacks at every 10 hits. The highest combo is at 50, giving the player +15 health. Only the highest combo count will register after a wave. Getting hit once will brake the combo. Also, not receiving damage during a wave will give the player +10 health. It’s a good idea to combine both melee and ranged attacks to keep the combo alive while avoiding enemy attacks. Running into enemy sprites do not hurt unless they are in the middle of attack animations. 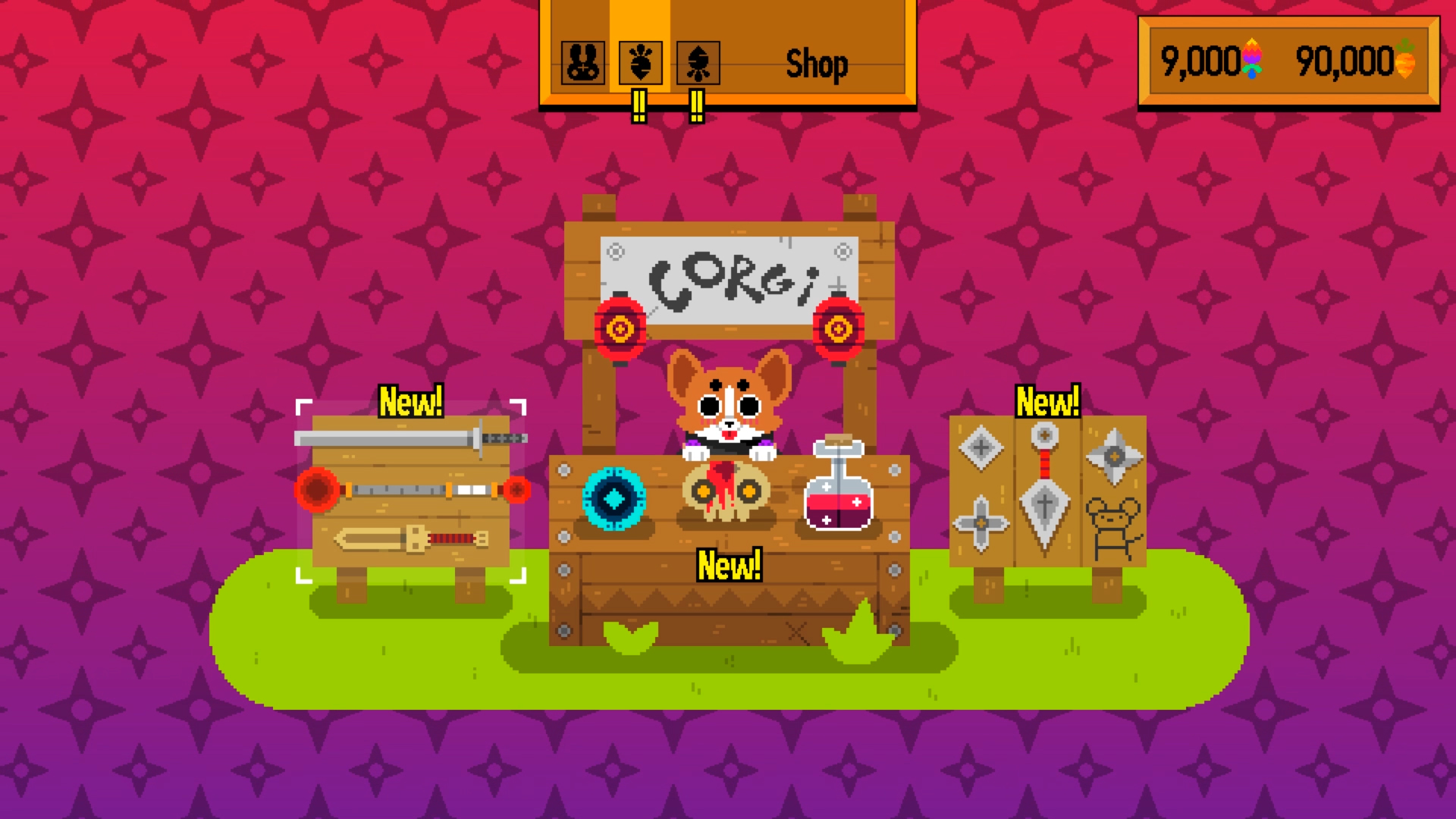 With all the running and dodging, it is very important to pick up as many carrots and rainbow carrots when possible. The player can use these to buy new weapons and accessories from the Congi shop. Rainbow carrots, on the other hand, can only be used at the night shop. The night shop sells cosmetic items that the player can use to change up their mask when they feel like it. Masks do not offer any bonuses, they are just there to look cute.

After a while, the player gains access to elemental stones that do a lot of damage when the blue bar beneath the health bar is full. Use it as the screen fills up with all sorts of bad guys. Beating the World boss nets an elemental stone. There are multiple stages in each World. A special stage in each world allows players to run a gauntlet of endless waves for chests and other rewards.

The premise of the game is as simple as it gets – build as long a combo as possible to get health back. At earlier levels, that is an easy enough task to do, but in later stages, every wave turns into a fight for survival. It’s certainly a rush when all sorts of attacks get thrown at you from multiple angles. You will need to think fast, or risk getting run over by the game’s many kind of enemies. 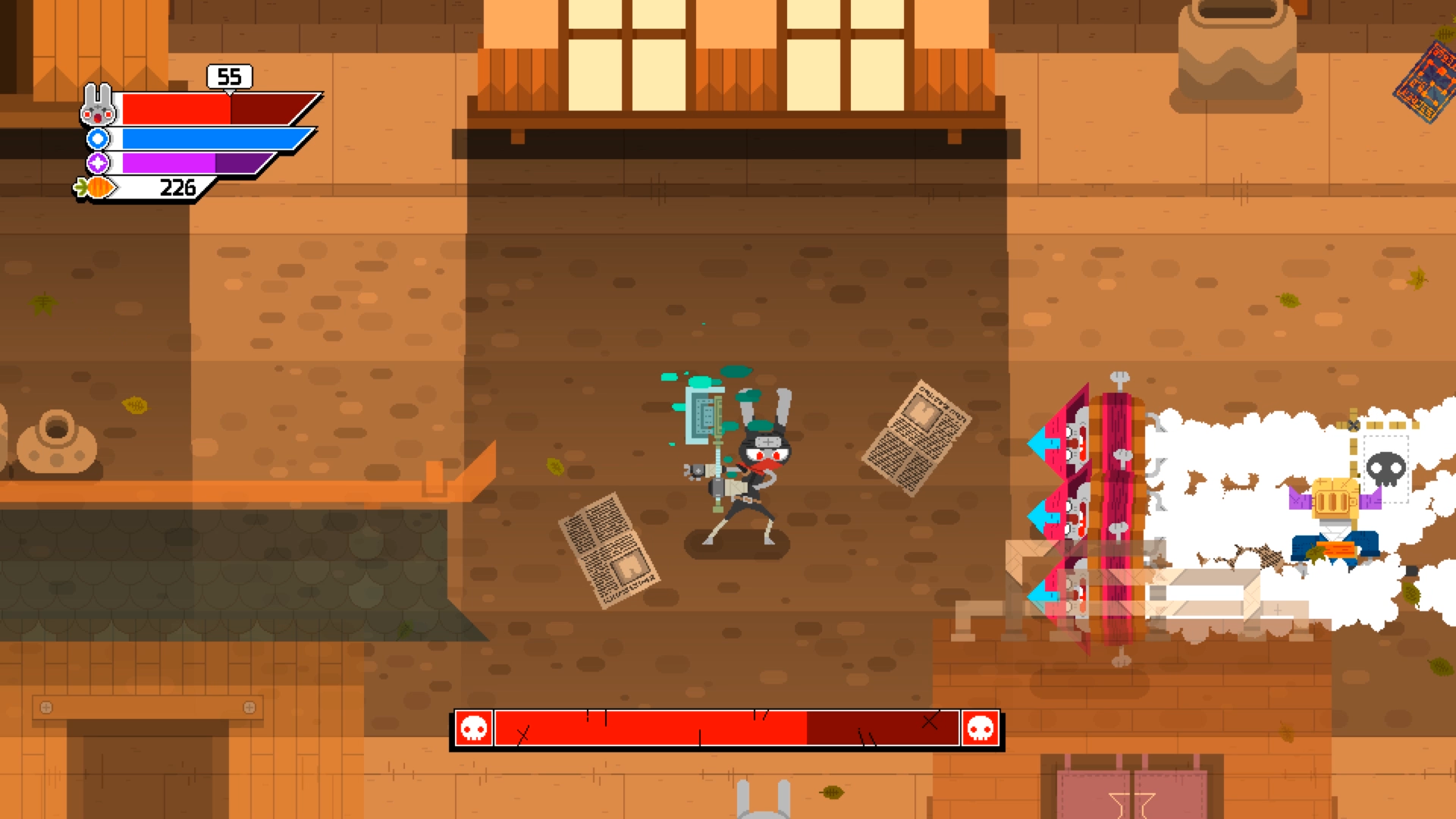 Enemy variety is on a different level in this game. There are some truly interesting designs that keep will any good player on their feet. The first ones that come to mind are Sara troops. Basically, monkey samurai. They are not a threat unless the player, or friendly fire, removes their helmets. Yes, enemy attacks can hurt their allies. Once the helmet is off, Sara troops rush at you with murderous intent. Only cooling off when the charge is done. Sara troops will hound you until they are dead. And that’s just the tip of the iceberg. We are talking about enemies that require throwing weapons to deal with. Enemies that drain energy unless you’ve got enough left to dash free from its grasp. And let’s not forget the ever popular shooters that cast projectiles with varying speeds and patterns. It’s a madhouse, I tell ya.

Always a delicate balance between combo-chaining and the need to eliminate foes, melee weapons come in various lengths and speeds. While long weapons have decent reach, they pale in comparison to the hit speed of short weapons. There’s always a trade off to consider here. Do you go for hard hitting weapons that dispose of enemies at a fast rate? At the risk of never building up the combo meter? Or do you choose the faster hit rate of short arms? But risk exposing yourself to enemy attacks. Fortunately, your choice of range weapon might be the determining factor, if you know what works.

I was expecting the game to be just another generic beat-em-up with the same unoriginal enemies. Oh boy, was I wrong there. The first world was easy enough to finish. But by World 2, I was running marathon after marathon desperately trying to stay alive. I was looking at the end of wave notification to see how much health I got back, and often despair over my efforts barely covering the cost of losing health in the first place. It’s an uphill battle by game’s end. Kinda reminds me of NES hard in a way. 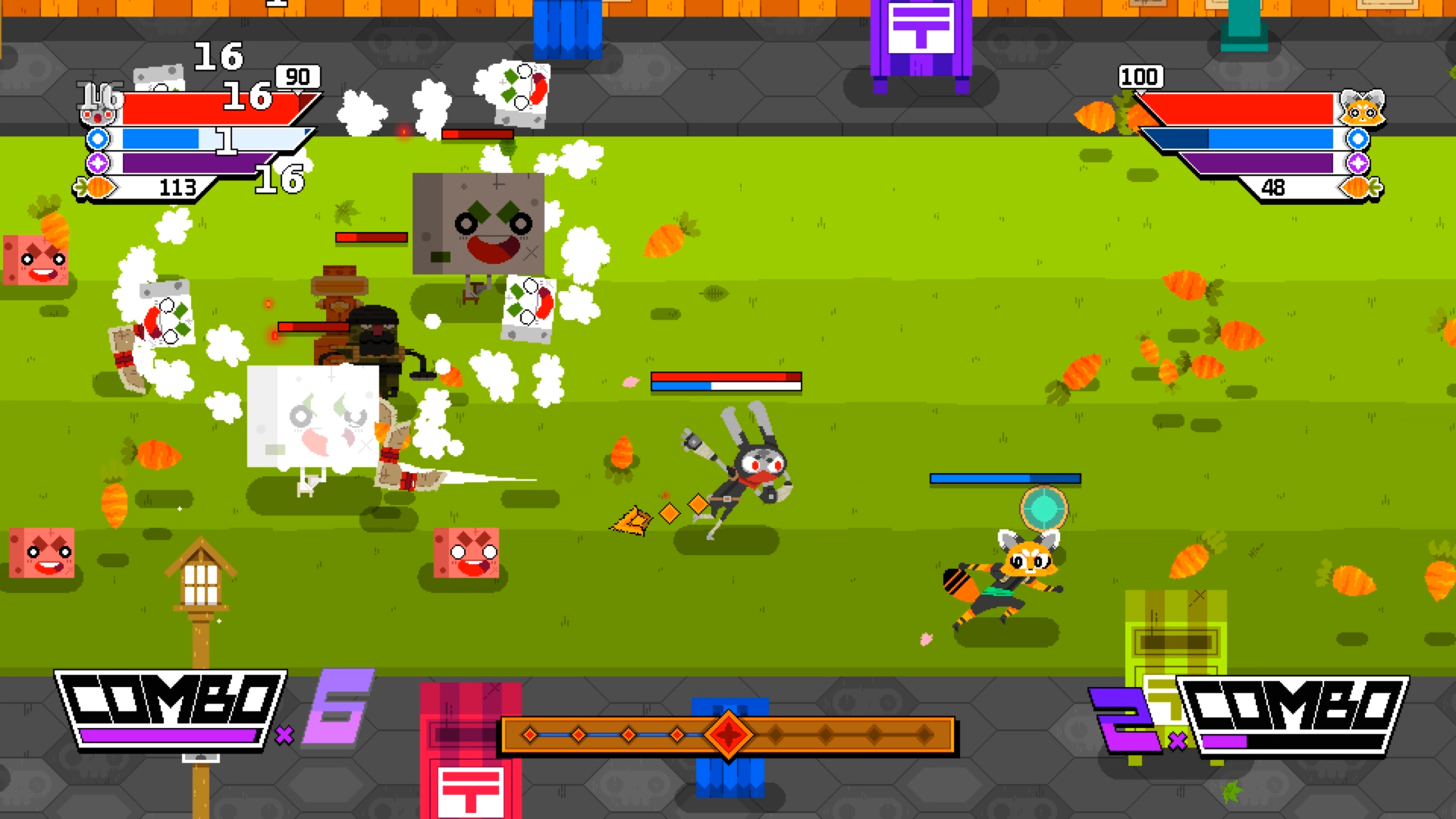 Despite all the Naruto references that may potentially apply here, Ninjin is a fun addicting game with lots of replay value. The weapons do their job adequately. The most memorable aspect of entire experience is the very wide enemy variety that constantly keeps me on edge throughout the stage. Speaking of stages, the reward for maintaining S rank is a mere portrait change for your save file. But I’m pretty sure that’s more than what most games give out for equal amounts of effort.

My only complaint here is that the game starts off as a walk in the park, but it quickly turns into a marathon much earlier than expected. Personally, the artstyle and presentation reminds me of early PS1 games. Maybe even flash games from the early 2000’s. I don’t know, maybe it’s just me. In any case, I recommend this game to 2D enthusiasts looking for a challenge. There certainly is no lack of it with this title. If you’ve got a long afternoon to spare, I’d say give this game a try. You won’t regret it. 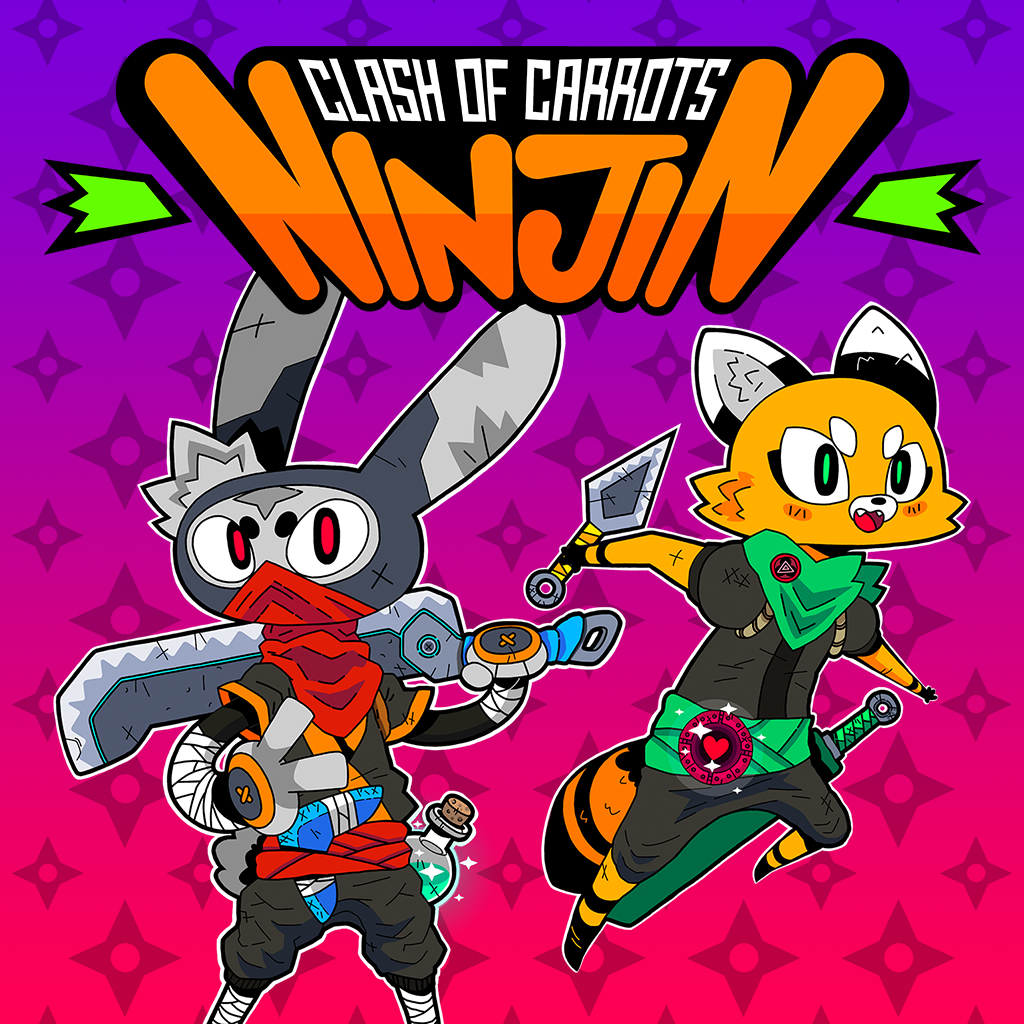 Ninjin: Clash of Carrots Review
Score Definition
We tell you, it’s a good game! It’s not average! It might have some problems here and there, but you have to admit it is a “Good” game.
Pros
Rewards players for getting S rank in as many stages as possible
A laundry list of enemy types that should keep anyone on their toes
Near endless weapon combinations
Highly replayable
Cons
Easy to difficult in a heartbeat
Frustration is a factor
Retrying levels feel like a chore
7.5
Good