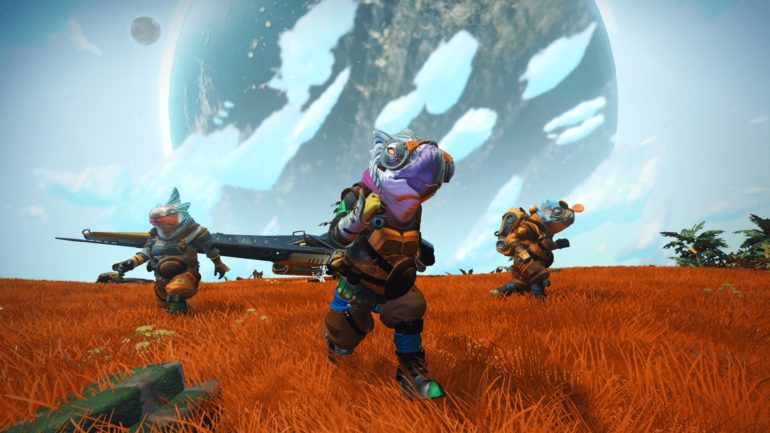 The studio first confirmed that the game will officially come to the Xbox Game Pass tomorrow, June 11. To coincide with the announcement, a Windows 10 version will be available as well.

Next the studio revealed that starting tomorrow, PlayStation 4, Xbox One, and PC players will be able to explore, journey, survive, build, and trade together under one game. It will now support cross-platform multiplayer and will join the small number of games who has the same feature.

To support this feature, the studio has made a lot of work into the new update, the technology and systems to make this work. They also moved to a new networking architecture with more flexibility for the future, which will allow players to play together regardless of platform.

The upcoming update will also introduce new updates as well. Check the patch notes below:

• No Man’s Sky is now available in the Windows Store and is on Game Pass for Xbox One and Windows 10 players.

• Replaced the entire network backend, so that players can now make multiplayer connections across all platforms.
• Cross-platform groups can be created or joined in game, or from the frontend.
• Ambient multiplayer on the Space Anomaly, in space, or on planets, can now match you with players from any platform.
• Players from your own platform are identified by your platform’s icon. Players from another platform are identified by a controller icon.

• It is now much easier to target other players to see their names.
• Added a warning message when leaving the Anomaly while listed for a Nexus mission that has not started yet.
• Iteration Ares now sells a range of basic upgrade modules.
• Improved the feeding experience when giving bait to large creatures.
• Introduced a small number of general optimisations.
• Introduced some small improvements to load times.

• Upgraded the OpenVR implementation to 1.10.30.
• Cockpit exit handles can now be grabbed both ways up.
• Added an option to show the player’s body when playing in VR.
• Camera height now reflects the height of your character in VR.
• Improved the accuracy of hand tracking in VR.