New Halloween content to enjoy and getting inspiration from Dune. 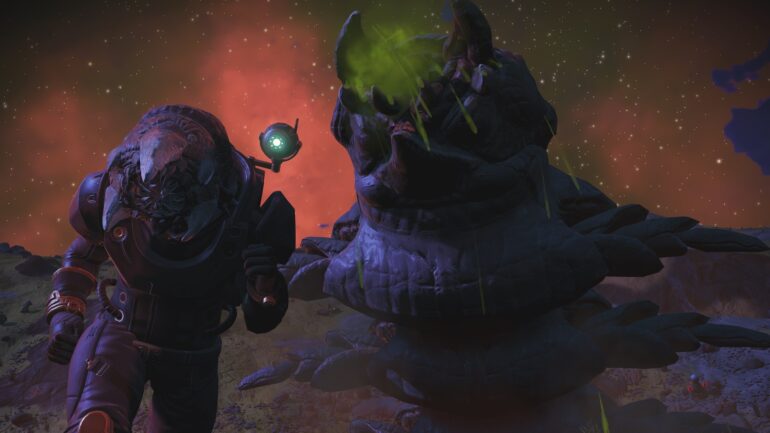 Just in time for Halloween, Hello Games launches the newest event, Expedition Four: Emergence. This will be the first Expedition to have its own narrative and also a mini-update. It brings a lot of enhancements that will improve the game. With its narrative involving the Titan Worms, it seems to coincide the upcoming launch of the new Dune 2021 movie. A nice, little touch there.

According to the details shared by Hello Games, there are Titan Worms that have been invading some planets across the universe. Instead of treating them as gods like in the Dune lore, in here they are treated as pests that black out the sun and destroy the terrain with their cursed dust.

In this event, players will be stranded on the planet Wasan, which is a barren world that got ravaged by dust storms and infested with the monstrous Titan Worms. They will have to locate the Titan Worm impact sites, destroy the Hungering Tendrils, and collect the Vile Spawn that linger behind.

As players go through the narrative of this new event, they will uncover the secrets of its story. It will reveal the history of a dark cult and confront the Atlas with evidence.

The Titan Worms that have scattered throughout the universe have been enhanced with new biologies and types. They have new variants which are stronger and more terrifying than ever.

The sandworms can be tamed as well and can grow into a large companion that can be fed, pet, ridden, and explore together the universe. They can be terrifying, but also awesome when they are fully grown.

The Emergence Expedition will offer a number of exclusive rewards that no other event will offer. These rewards can be redeemed across all No Man’s Sky save games.

After discovering the secrets of the ancient dark Vyk’keen cult, players can change their appearance of their Traveler character into the many-toothed grotesque alien head.

Players can customize their Jetpack exhaust nozzle with the Ghastly Trailer. It will give a unique organic effect like a gooey fluids and tiny worms during flight. Just in time for Halloween.

There also the Titanic Trophy that once belonged to a Titan Worm can be added as a décor to the bases.

With the launch of the update, the particle effects have been improved for meteors, muzzle flashes, explosions, and more. They have all been revamped for the better.