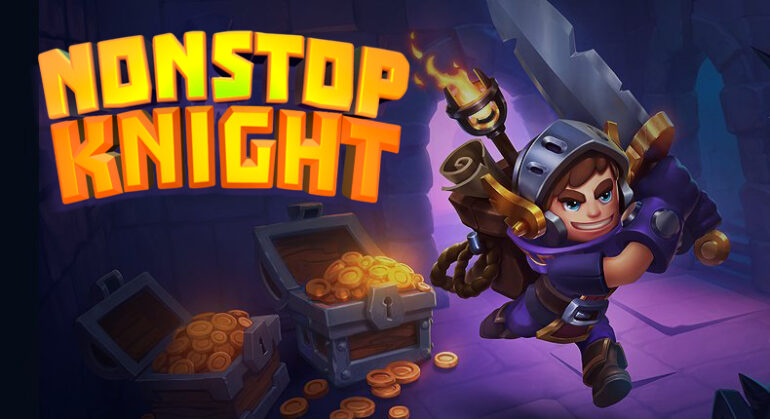 Nonstop Knight is a mash-up of an RPG, a dungeon crawler, and an idle game that has hack-and-slash elements. The goal is to reach the farthest dungeon floor possible while making your way through thousands of monsters. It has very minimal controls and rewards can even be gained while the game is closed.

Nonstop Knight is, by design, an idle game with very basic mechanics and gameplay. What sets it apart from most idle games is that the graphics are very much dynamic. You can really see your knight going through the dungeon and slashing away monsters. Though it may look like it but it’s not really a rogue-like game; it has the randomness factor but all the stuff that you get such as the gold you earn and the gear you wear are lost via ascension, not through death.

The levels are set in a way that a mini-boss will be at every after two or three floors and a big boss will be at every tenth floor. Killing off boss monsters will give out treasure chests that will give out one of the three items: helmet, sword, and cape. The item give-out rotates among the three but each equipment has its own set of intrinsic qualities that will give out enhancements to the knight. The qualities are random but can be re-rolled by spending gems, the premium currency of the game. The drops also vary in rarity, with the rarer items having better stats. The equipment can be upgraded with the use of gold with no limits.

There are milestones set based on the highest floor reached per run. Reaching these milestones will give out loot boxes that may give out more gold or experience and sometimes revive and frenzy potions, and even pet fragments. Milestones also give out multipliers for tokens. These tokens are used after ascending to upgrade specific stats such as attack damage, spell damage, armor, etc. Ascending and spending tokens on these permanent upgrades will enable your knight to go farther then the previous runs. There is also a boss carnival mode where you’ll team up and compete with other players in killing boss monsters, but the upgrades gained in this mode will only last until the event’s duration. 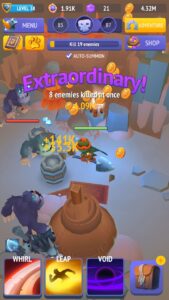 Nonstop Knight is made in a way that would entertain idle game junkies. Most people might find its repetitiveness bland and boring, but those who love the genre will have a great time. The need to reach the next milestone, in itself, is enough to fuel the urge to grind more. Going through the dungeon again after ascending and upgrading is such a great and rewarding feeling.

It’s not heavily reliant on micro-transactions as it is very generous in giving out bonuses and perks, provided that you don’t mind watching ads once in a while; the ads aren’t intrusive, anyway. The in-game purchases are not a necessity but they are relatively cheap and they do provide a substantial boost. If you have an idle gamer level of patience, then you might want to give this game a try.