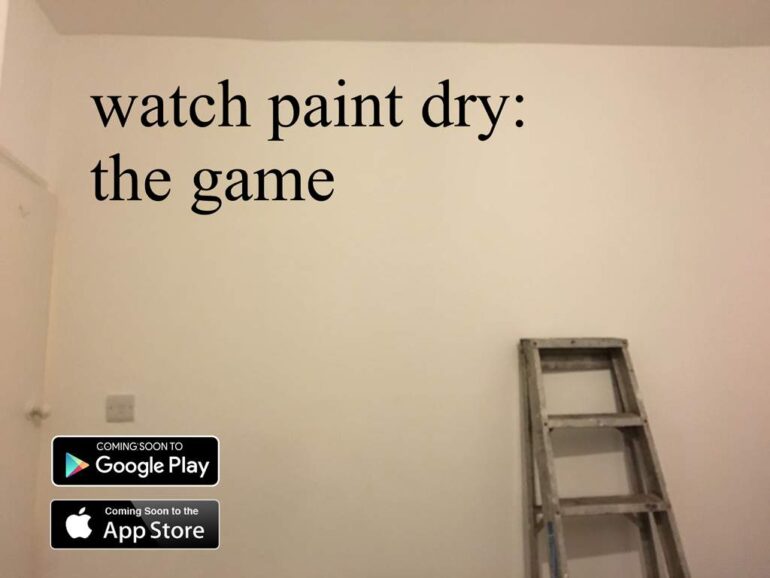 ZQGame Global, a premier publisher and developer of mobile games today announced it will be teaming up with indie developer Ruby Nealon for the mobile game adaptation of Watch Paint Dry. After receiving praise and notoriety for exposing vulnerabilities within Valve’s Steam platform and circumventing its developer game approval process, Watch Paint Dry has unofficially earned the title of shortest lived game on Steam.

“After careful analysis, we can confirm that Watch Paint Dry has potential to be a top grossing title,” said Kyong Kim, Lead Producer, ZQGame. “While it did not pass our rigorous game monetization tests for player lifetime value, we believe its intrinsic value alone will make this a hit.”

“We just sat down and thought about the potential for DLC with this one.” commented Ruby Nealon, when asked about his decision to aim at mobile markets. “We had so much demand for options for different coloured paints and we think a mobile model makes the most sense for business.”

The mobile version of Watch Paint Dry is currently in production and will be available for global release, Spring 2016. Players can pre-register for the mobile versions now at: http://zqgame.com/

Players looking to jump into the thrilling adventure of Watch Paint Dry can download and play now for free by visiting the official game website at https://watchpaintdry.ruby.sh/game.html. Players can also support the developer and CAFT, a charity in Manchester providing holidays for disadvantaged, disabled and terminally ill children, on the Groupees game bundle platform at https://groupees.com/taxyear2

“Recently, for reasons I struggle to understand, people have been asking for a release of Watch Paint Dry through Steam,” said Nealon. “After minutes of negotiation with Valve, they said no. However… they didn’t say I couldn’t release a DRM-free version.”