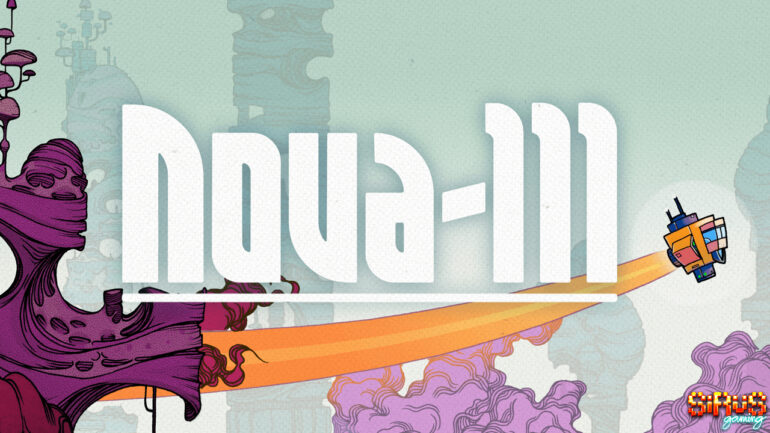 When a turn-based world finally gets into real-time action, things get complicated.

Nova-111 is a sci-fi adventure game with a strategic twist which lets its players play in a world wherein time both moves in certain specific intervals and also flows with real-time simultaneously. Developed by Funktronic Labs, Nova-111 sets its players to pilot an orange vessel under a rescue mission to save the other scientists who are trapped within the worlds of an alien realm.

The whole premise of Nova-111 is to explore and navigate through the alien worlds while trying to avoid fatal traps and deadly creatures which are out to kill you, all the while rescuing fellow scientists along the way. Players control the ship and maneuver it through the maze-like level with the main objective of getting from point A to point B. The ship gets upgrades and special skills along the way that would help the journey. The ships actions are done per turn and some elements such as aliens and obstacles also move by turns but others move in real time.

The real challenge of this game is how to keep your mindset constantly shifting in between thinking in turn-based manner and playing in real-time. The game starts out easy  because most of the elements still move in turns but the difficulty rapidly goes up when some elements start to move in real-time. One can be caught off guard when the situation demands you to move in turns and then there’s this monster who is draining your ship’s power by the second. It might just look like you can just breeze through the first few levels but the game would easily become frustrating to finish in the latter levels, making sure that you repeat the level at least once before letting you go. There’s also a scoreboard available that lets you see how you fare against other players for each of the playable levels.

Nova-111 has simple yet captivating visuals that is pleasing to look at. The mix of the world’s detailed art style plus the pixelized rendering of its moving elements gives quite a good contrast. The sounds and BGM aren’t much noteworthy elements but they are not distracting and they aren’t bad, nonetheless. The sounds and the visuals together are just right for a game that warrants its gamers to focus more on the gameplay.

All in all, Nova-111 is a good and simple game but still quite challenging. The idea of mashing in real-time and turn-based mechanics is really great and promising but the game just lacks a more deep and thorough storyline to keep its players interested. Highly recommended for those who like to play in turns in general but with the added tension of moving in real-time plus the challenge of thinking through a situation as fast as possible.

Nova-111 is a good and simple game but still quite challenging. Highly recommended for players who like to play in turns in general but with the real-time twist and those who like the challenge of thinking through a situation as fast as possible.

This review is based off a Wii U copy provided by the developer.