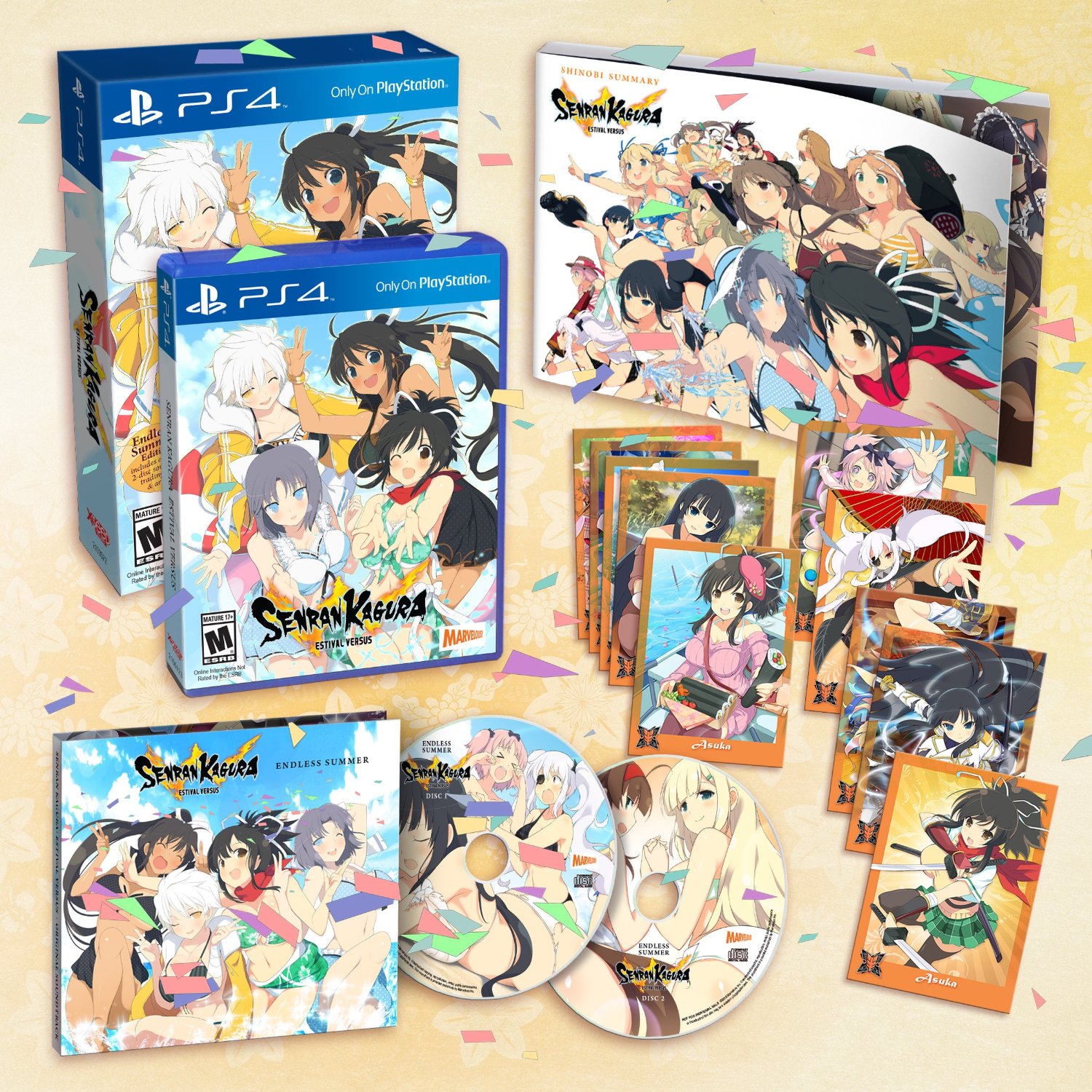 XSEED Games, the independent-minded console publishing brand of Marvelous USA, Inc., today announced that Senran Kagura Estival Versus, the latest iteration and first home console release in the renowned busty brawler series, is now available in North America for the PlayStation®4 computer entertainment system and PlayStation®Vita handheld entertainment system. The game is available digitally via the PlayStation®Store as well as physically via a limited “Endless Summer” retail release, the latter of which includes a 108-page art book packed full of artwork from the SENRAN KAGURA series, a randomly chosen set of ten 2.5” by 3.5” holographic “pin-up cards” featuring one of six bevies of badass beauties each in two distinct poses, and a 2-disc soundtrack containing 70 total tracks.

In addition, XSEED Games has revealed that today it will provide players with a free update to the game including additional multiplayer game modes and combat features (such as Puppet Walkers, the first rideable mech in the series), playable characters Rin and Daidoji, and various tweaks and balances to ensure fair play across the board. In the weeks following today’s launch, a variety of free and paid DLC options will become available for fans, including additional costumes, new playable characters (such as Ayane from the DEAD OR ALIVE series), new missions, and much more. All DLC options from the game’s Japanese release will eventually make their way to the North American release of Senran Kagura Estival Versus, excepting for the Japanese-exclusive playable characters from the Ikki Tousen series.

“I’m eagerly awaiting Western fans’ reactions to experiencing Senran Kagura on PlayStation 4 for the first time,” said Kenichiro Takaki, series producer at Marvelous Inc. “I’m really impressed by the way in which the console enhances my beloved series—both Senran Kagura fans and interested newcomers alike are in for a treat. That said, I feel that Estival Versus’ PlayStation Vita release is hands-down the series’ greatest handheld experience yet.”

In Senran Kagura Estival Versus, a mystical phenomenon transports the nubile ninjas of the titular series to a parallel dimension to face off against their rivals in a new kind of battle. In this strange world – which resembles a sunny, sandy island paradise – the girls are thrown for another loop as they encounter departed loved ones and ultimately have to decide if they can bear to part from them a second time.

With over two dozen playable characters, making this the biggest roster in the series’ history, Senran Kagura Estival Versus boasts more moves, more story, more attitude, and more destruction online with matches that can support up to 10 players (PS4™ system version only; “PSVita” system supports up to 4 players). All of the series’ previous Shinobi girls return with a host of upgraded moves to master, and new playable characters offer more challenges to conquer, along with a story that’s equal parts sexy and shocking, serious and scandalous, busty and bouncy.

Developed by Marvelous Inc. and Tamsoft and published in North America by XSEED Games, Senran Kagura Estival Versus is now available in North America for the PS4™ and “PSVita” systems. The limited “Endless Summer” physical release has a suggested retail price of $59.99 for the PS4™ system and $49.99 for the “PSVita” system, while the digital release of the game will be available on the PlayStation®Store for $49.99 and $39.99 respectively. This title has been rated “M for Mature” by the ESRB.

Check out the trailer!

More details on the game can be found at the product website www.hanzonationalacademy.com/skev/ .