Love that new look of Bastion and those are some big changes to him and Sombra. 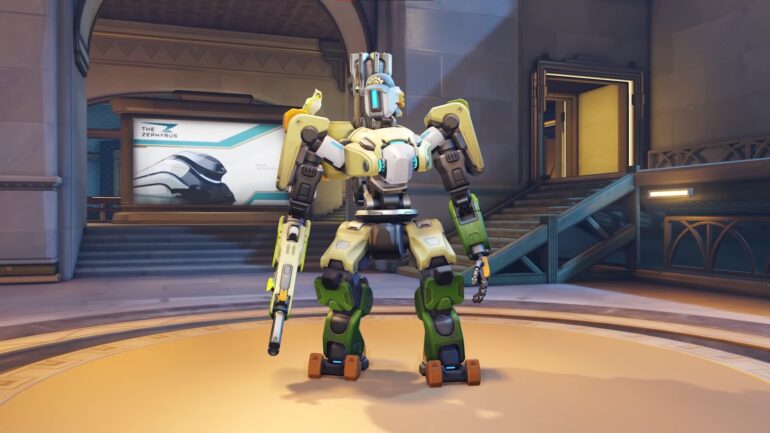 There are two new videos that feature the loveable yet powerful mechanical warrior Bastion. The first video features Bastion in his new look where he now has a sleeker and cleaner form with a cool hat on his head. It was revealed in the comics that Bastion and Torbjorn have become friends and the latter could not help but give upgrades to his companions. The developers revealed that while he has a sleeker look now, they have still preserved his rustic behavior in his animations. He also has a cute bird on his shoulder named Ganymede.

The second video explains how the developers have reworked Bastion’s gameplay. They explained that his changes are quite big and fans could expect a brand-new Bastion when they play as him. They have removed the self-repair button and replaced it with an alternate fire of a projectile that can bounce off of walls and stick to players. It does a ton of damage and has a big radius. His Recon form weapon has been changed quite a lot, has no spread, but has reduced fire rate. He does not have a Tank mode anymore but now has the new Artillery mode. Lastly, he can now move while in Sentry mode, but with limited movement speed.

While Sombra has few changes to her look, her gameplay instead has tons of rework. The developers have reduced her CC abilities in line with larger changes to Overwatch 2. Her Hack ability has been changed significantly with her cooldown reduced with it lasting 8 seconds and two components.

The first component works just like in the first game, disabling abilities while reduced to 1 second. The second component of the Hack ability is a brand-new feature that allows her and her team see their targets through walls. Hacked targets will get 50 percent more damage from Sombra. Her ultimate has been tweaked, which does not disable shields, but it deals up to 40 percent of the enemies’ health. Lastly, she can now hack while being in Stealth mode.

Overwatch 2 still has no release date and it is possible it will be released on PS4, Xbox One, Nintendo Switch, and PC.