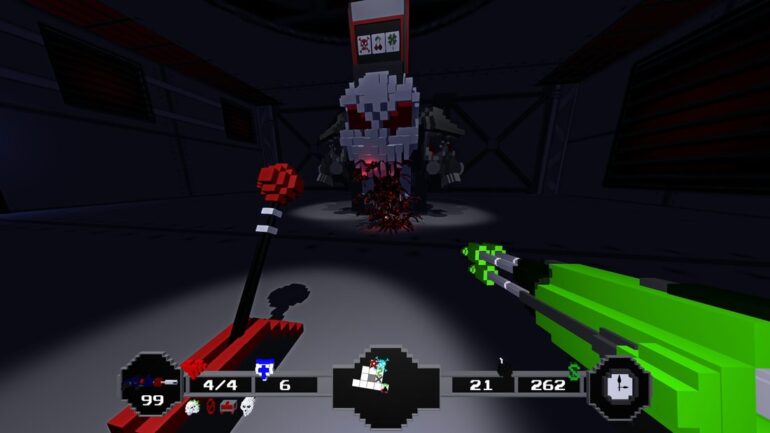 Paranautical Activity is a first-person shooter which has rogue-like elements developed by Digirati Distribution for the PC through Steam and was later on released for the Wii U just recently. The main goal of the game is to survive hordes of demonic creatures with the aid of your limited arsenal.

The premise of Paranautical Activity is that you are stuck within some sort of a facility with several rooms and floors and you have to stay alive by shooting down demons with guns, bombs, etc. There is no real backstory; it’s pretty much shoot-to-survive. You can choose through a few selection of weapons to start with but you’ll be able to pick up new ones by buying it with the gold you collect from the demons or by killing a boss monster of the floor.

It also has a rogue-like element wherein you won’t be able to keep the items you got when you die. Every time you spawn, the floor where you are at changes and so do the enemies. Still, the progression of the difficulty level goes up per floor with all the harder and faster enemies that are thrown into the mix. With the limited amount of life and armor that you can have, some floors would really be a challenge and would most definitely require several reruns to beat.

The game itself is rendered in voxel form and the environment where the action happens is set in a dark tone, sometimes too dark to see, with a few hints of lighting from the torches, barrels, and the enemies. In short, it’s a boxy-looking game. Not much can be said with the in-game sound effects but the fast-paced techno music does help in setting up the fast-paced action of the game.

One more thing: players of Paranautical Activity who have played the game on the PC with a mouse might have a problem playing the game on the Wii U. Unless you are a master of the analog sticks, playing an FPS game with a mouse, especially for the amount of aiming you need to do, is more likely to be more fun and more productive. That adds up to the challenge of clearing out a floor, I guess.

Overall, Paranautical Activity is a really, really challenging game to play especially for casual gamers. The visuals and the theme might not appeal to most of the gamers out there but the action it gives out might get some hooked up. The repetitiveness of the levels and the repetitiveness brought by dying and trying might get tiresome real quick and another downside is that there really isn’t much that the game can award the player besides unlocking an even harder level of difficulty plus some small plaques of achievement. Still, we recommend Paranautical Activity if you are into frustratingly hard but nice games.

Check out a detailed description of the game here. If you want to get the game for the PC through Steam, go here.