An eternal punishment for an innocent sin – A Persona 2 Review 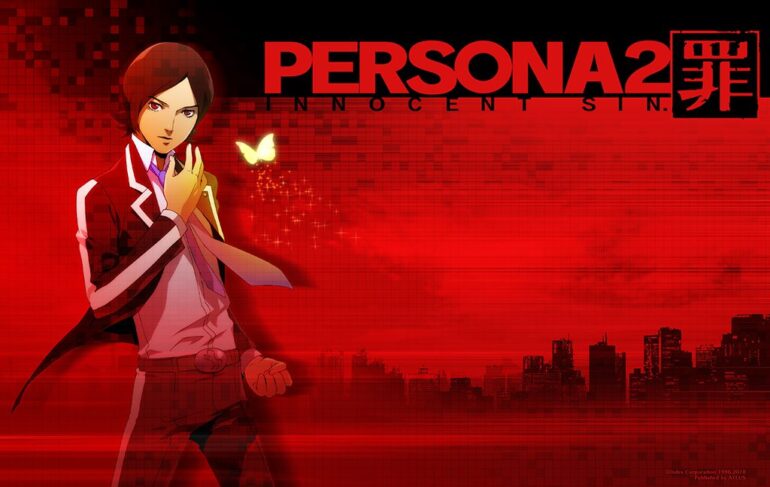 In a previous review, we managed to tackle the first game in the Persona series, the aptly titled Shin Megami Tensei: Persona. This time, we will be continuing the series of Persona game reviews with the second game in the series.

Persona 2 is divided into two games in the duology. The first half being Innocent Sin which was originally released in 1999 and was then shortly followed by the second half, Eternal Punishment, one year later. Both games later got ported to the PSP in 2011, but only Innocent Sin was released in the west and to compensate, the original PlayStation version of Eternal Punishment was released for digital download on the PlayStation Network. Because of that, this review will only be focusing on the first half of the duology as both games remain functionally identical gameplay-wise.

A simple turn based JRPG at it’s core, Persona 2 brings a slew of familiar video game conventions from the previous game while introducing new mechanics of it’s own that helps make it stand out on its own more when compared to other games of the same genre. While the over world is still navigated using a map of the city, unlike the previous games from the Shin Megami Tensei franchise that have dungeon crawling be done in a first person perspective, Persona 2 has 2D characters traversing through 3D dungeons with an adjustable isometric view. This departure from its roots  help make the flow between exploration, combat, and cutscenes a more fluid experience.

Combat in the game is done similarly to the first game. The player selects what actions the members of his party will do and then proceed to watch the combat unfold. Unlike the first game, positioning and range of a unit are no longer factors that contribute to combat which give players one less thing to worry about. Units are also limited to just one kind of physical attack instead of the previous game’s system of having both a main weapon and a secondary firearm. While this simplifies combat a bit, physical attacks now come in five different types to compensate. The system of summoning Personas to cast physical and magical skills also make a comeback in this game. One new feature added to the game that adds another dimension to combat are the inclusion of fusion spells. Fusion spells are activated when two or more party members cast certain spells together which have them summoning their personas together to cast a more powerful combined spell. Fusion spells are powerful and can be accessed fairly early in the game, so it’s quite common to get through most of the game by using them.

Personas, the main recurring element in the games, are the character’s psyche manifested physically to do combat with. While every character starts with a specific Persona, more personas can be obtained by collecting tarot cards which can be presented to the velvet room for fusion. Every Persona comes with a different arcana and each of the playable characters have different affinities with certain arcana, thus it is important to make sure that the Persona you’re equipping to a character is someone they have a high affinity with, otherwise they’ll perform comparatively worse. While there is a wide variety of Personas one can grind for, the amount of grinding necessary for later personas may put off some players. Later in the game, depending on certain choices made in the game, upgraded versions of the characters’ initial Personas can be obtained, so it’s entirely possible to finish the game without the need for Persona fusion.

Also making a return to the game is the inclusion of the option to negotiate with the demons you’re facing. Every character has several dialog options available for use in appealing to any of the four moods you want to make a demon feel. Generally your goal is to get on their good side and have them give you items such as healing items, money, or tarot cards. The process is a bit tricky for beginners since there are no means to predict which approach yields the best results so a bit of trial and error may be needed at first unless you consult a guide. Just like fusion spells, multiple characters can now participate in a negotiation together. Different combined negotiations yield different results depending on the characters involved, and it’s a nice touch to see how the resulting conversations are born of the unique personalities of the party members interacting.

Another new interesting feature to make it’s debut in the game is the rumor system. Rumors are a central theme in Persona 2 and how the strange occurrences that happen in the game are because of rumors becoming a reality. This phenomenon becomes utilized by the player by conversing with rumor mongering NPCs and visiting the local detective agency and deciding which rumors to spread. Spreading rumors about the quality of merchandise being sold in a store for example could have either a positive or negative effect depending on chance. It’s a nice feature that ties directly with a core plot point but suffers from being rather underutilized gameplay-wise since it’s only really used for shops and a few story instances with no major impact on the plot.

The game’s visuals share a common flaw with the port of the first game in that they really didn’t age all that well. This may turn off newer gamers who are more accustomed to flashy spectacles as the game really shows it’s age with stiff animations and sprites that fail to truly capture the desired image they should be representing. Dated visuals and stiff animations aside, the game still manages to exude a heavy aura of how dark the situation is with red being fairly prominent in the game’s color scheme.

Accompanying the visuals are the game’s excellent soundtrack which is once again composed by series veteran Shoji Meguro. Present are tracks which help bring out appropriate emotions for scenes both dark and lighthearted. Funny scenes feel funny, serious scenes are thick with tension, and emotional scenes have the kind of weight you’d definitely feel thanks to how the score does a good job of setting the mood. If anything, the only thing getting in the way of this game’s sounds getting a perfect score would be how awkward some of the sound effects certain demons make are which really ruins the serious mood of combat sometimes.

Players who are willing to overlook the graphical limitations are greeted with it’s strongest suit, it’s deep story that’s rife with philosophical themes such as the gravity of one’s sins and facing the ugly side of our personalities that we so often choose to ignore. The story picks up a few years after the events of the first game. Innocent Sin takes place in the fictional city of Sumaru where rumors of the so-called “Joker Game” are being spread. According to the rumor, if you follow the ritual and summon the joker, he will show up and either grant your heart’s desire or erase you from your existence if you cannot tell him what your wish is. The protagonists of the story find themselves attacked by Joker for a sin they apparently committed against him sometime in the past but cannot remember. What soon follows are a series of bizarre situations resulting from rumors becoming reality as the protagonists attempt to find out just why Joker is after them.

Rumors play an integral role in how the plot of the game plays out. Mysterious forces wish to manipulate this phenomenon to meet their goals. Demons show up, high school students get cursed. A lot of strange things happen which initially seem like random occurrences all end up intertwined into one big convoluted plot. It’s interesting to see how the protagonists investigate the rumors which cause the strange happenings in order to find out how to resolve them, only to find themselves in the middle of another strange situation that needs solving. It’s the kind of detective plot that drives you to progress further into the game just to see how you can make sense of it all. The way the rumors in the plot are manipulated are done so well in a way that it makes completely strange scenarios like a boss fight with Adolf Hitler himself make complete sense while staying integral into the overall scheme of things.

Overall plot aside, the game’s characters are also one of it’s strong suits. Each character has their distinct personalities that really make them stand out from each other. These personalities are explored even further when the game decides to tackle their back stories which give them depth and help explain why they are the way they are now. The game also doesn’t shy away from show us the more unpleasant side of our heroes when they are forced to confront their physically manifested insecurities in what literally amounts to a mirror match. Said confrontation helps remind us that everybody has their flaws and thus make our heroes seem well rounded and more human.

So, to sum it all up, the game’s best points are marred by dated visuals, an overabundance of random enemy encounters, the annoying loading screens whose nuisances become even more apparent with every random encounter every few steps you take, and a slow combat system which make grinding feel like an even bigger chore. Old as the graphics may look, it’s still a significant improvement over it’s predecessor and the PSP port does try to streamline the presentation with a sleeker interface, new character portraits, and a remastered soundtrack.

That being said though, Persona 2 is still a classic gem who’s engaging story and deep, interesting characters would make it a good choice in any collector’s list and would definitely be a worthwhile experience for people looking for a deep, philosophical time sink. A remastered port of an old classic, Persona 2: Innocent Sin for the PSP holds a deep and intriguing plot that those willing to look past it’s age are sure to appreciate. For fans of the Persona franchise and newcomers alike, if you’re willing to brave a long and arduous trek for the treasure that is it’s story, then the Persona 2 is definitely for you.

Stick around for more since the next Persona game we will be reviewing is the one that really brought the franchise to the west and made Persona such a household name, Persona 3.