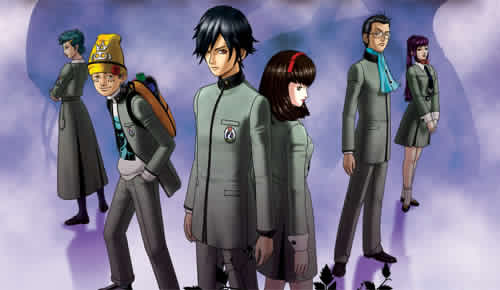 With the latest trailer for Persona 5 causing a stir in the online community, the hype for the game has gotten bigger than ever. With all this hype permeating the atmosphere, there is no better time than now for fans to ride the hype train. What about those who’ve never heard of the series? Well don’t worry worry since we’re here to get you up to date and give you an in depth review of all the mainline games of the persona series .

First off, the game that started it all, “Shin Megami Tensei: Persona”.

First released in Japan on 1996 under the title Megami Ibunroku: Persona, a spinoff of Atlus’ Shin Megami Tensei series of games, it later got localized in the west as Revelations: Persona with several changes mostly to the character ethnicity which reflected in their design. Since both versions of the game are difficult to come by these days, for the sake of the review, The more recent remastered port on the PSP will be used. The game starts with a group of highschool friends playing a game called “Persona” which supposedly allows them to see their future selves. After finishing the game, instead of seeing their future selves they get struck with lightning instead and pass out. Later while visiting a friend in the hospital, things get freaky and in classic Shin Megami Tensei fashion, demons invade the city. To combat these demons, this is where the recurring namesake mechanic comes into play. The protagonists summon “Personas”, manifestations of their other selves, to do combat with. 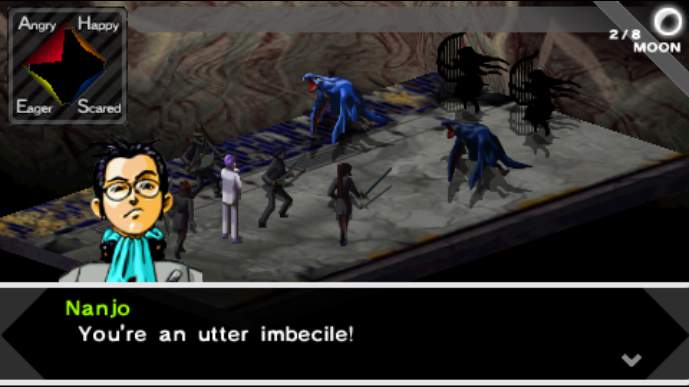 At first glance, the most apparent factor that becomes apparent to players are the dated graphics. For a 19 year old game, the graphics really didn’t age all that well and the PSP port really doesn’t do much to rectify that except for tweaks in the menu and an overhaul of the overworld map to make navigation less of a pain. Dungeon crawling is done in an old school first person perspective which may make classic SMT veterans feel nostalgic while possibly alienating those unfamiliar with the genre. While the exploration is done in first person, once a random encounter breaks up and combat starts, the view switches to a third person isometric view. Here one can see their party and the enemies laid out in a grid and it is important to get familiar with positioning since it’s a key feature in combat which we will tackle later. Interspersed within the long labyrinth-like corridors are rooms set in the same isometric view as combat. In these rooms, players can interact with NPCs and other party members for additional dialog, and there are also the occasional treasure chests for loot. Aesthetics-wise, the world of Persona carries the same “end of the world scenario” feel that older SMT games had with an abundance of abandoned city streets juxtaposed with fantasy style dungeons.

Onto the gameplay itself. Combat is done by having the player assign corresponding actions to the party members and then initiating combat and watching the combat itself unfold. As previously said, positioning plays a key role in combat. Each unit’s attacks and skills have a predetermined range which is why careful consideration should be put into where they stand in the battlefield so they can maximize how many units they can reach. Units have a number of means on how they can deal damage. They have the option of their primary weapons which range from swords to bows, secondary guns, and magic and physical persona skills which drain sp and hit points respectively. Experience in battle is gained based on how many units an attack hits, thus units that deal strong area attacks naturally level up faster than those stuck with single attack skills. 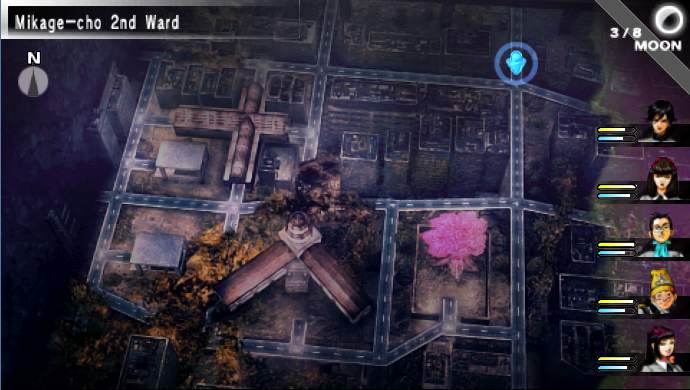 Even with all these options for combat, magic and muscle aren’t the only means of resolving conflict. Just like with previous SMT games, the demon negotiation command makes an appearance. Instead of bashing their skulls in, one can opt instead to talk with them in order to gain their favor.  Every character has a unique set of conversation options that have a different effect on every demon. Get a demon angry enough and they get enraged and refuse to further negotiate with you. Get them happy enough and they may reward you with money or helpful recovery items. Scare em off and they’ll actually refuse to fight you out of fear. Get them curious enough and they’ll give you their spell cards. These cards bring us up to the next major gameplay feature, persona fusing.  Bringing enough spell cards to the velvet room allow for the fusion of new personas. All these features add a nice level of depth to the combat but the ludicrously high encounter rate of random encounters may cause the novelty to wear a bit thin for players uncomfortable with the concept of level grinding.

Demon negotiations are a nice touch which often add humorous dialog to spice up the otherwise repetitive combat but it often becomes much of a gamble early on with a trial and error approach to seeing what conversation options give the desired outcome depending on what demons you confront. Persona fusing is also an interesting concept but may end up feeling like a chore since the higher level personas require a larger amount of spell cards which require constantly grinding for demons to converse with. All these factors make it apparent that the game was meant to cater to those hard core dungeon crawler fans who won’t mind a fight every few steps. 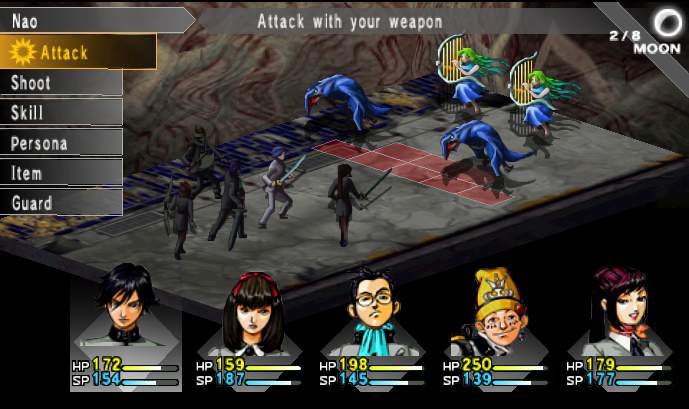 To help with the monotony of combat is the game’s soundtrack. The PSP version comes with a score handled by Shoji Meguro which gives the game really catchy tracks which will burn themselves into your ear with all the times you will be hearing them, especially the battle BGM. Every piece of music in game corresponds well with the kind of scene they accompany. The overworld BGM carries a vibe of despair and ruin which reflects on the ruined state the demon infested city is in. The cheery and upbeat school soundtrack gives vibes of carefree school days which when contrasted with the aforementioned ruined state of the world, helps emphasize how surreal the fact that their otherwise mundane world gets plunged into a realm populated by demons. The voice acting is sparse with only battle cries punctuating the battlefield and only a few lines are fully voiced. Being an old game, this is somewhat expected .

The game’s plot tackles the all too familiar plot of “demons invade the world and a chosen few teenagers bestowed with special powers track down the man responsible”. Despite this plot, the story is compelling enough to make you want to keep pushing through just to find out how it all plays out. For a game entitled Persona, it is quite ironic to see that not all the characters are that well fleshed out. The main protagonist is a blank slate for the players to treat as a self insert, and while the rest of the cast have their individual personality quirks that make them stand out from each other, this really doesn’t impact the overall plot that well. That and the fact that despite having a supporting cast of 8 possible party members, you can only carry a maximum of five people in your party, main protagonist included, and the rest of the characters just fade into obscurity, never to be mentioned for the rest of the story. 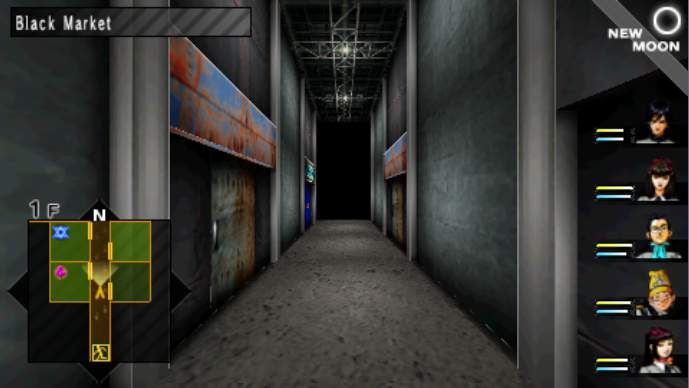 What does make an impact in the game are choices. The choices you make in dialog make themselves apparent in certain parts of the game, one example would be a certain dialog option would decide whether you fight a boss with just two characters or with our whole party. Besides the main plot which concerns the persona users chasing after the big bad, there’s also a second story route previously inaccessible to the western release but is now made available with the PSP port. This alternate route takes on a completely different path and an added level of difficulty which may give added replay value to the game.

Verdict
Overall, Shin Megami Tensei: Persona is a nice game to add to any JRPG fan’s collection. Compelling plot with interesting elements make it both a familiar treat to SMT veterans and a brand new experience for those unfamiliar to the series. The remastered soundtrack is fresh and really catchy which really adds some urban flair to the game.

That said, the game isn’t without it’s faults. The first person perspective isn’t something everybody is comfortable with, the dated graphics really show their age with stiff animations, repeated floor and wall patterns which become really apparent in the long and repetitive mazelike dungeons which may turn off people who see graphics as a big factor. The all too common random encounters may prove to be all too annoying to casual players, persona fusion may feel like a chore that requires grinding, and demon negotiation may feel like a clumsy addition to combat which breaks the flow.

With all the flaws stated, Persona is still a solid gem that while could use even further polishing, is still a unique entry that every hardcore SMT fan should try out. The first game in the Persona series, Persona is a unique gem that despite it’s dated graphics still proves to be a solid gem of a JRPG. Whether you want to prepare for the hype for the upcoming release of Persona 5, or you’re just a hardcore dungeon crawler looking for a new game to grind on, this game is definitely worth looking past it’s datedness. This is a game that requires patience, but definitely rewards that patience in the long run. While every game in the persona series can stand on it’s own, thus it isn’t necessary to play this game in order to appreciate the other games, but if you’re a fan of the Persona series then it’s still a good idea to see where it all began to contrast just how far the games have come and to see how Shin Megami Tensei: Persona laid the groundwork for what would be one of the biggest urban fantasy JRPGs to hit the world by storm.

Stick around for more since this is just the first of many reviews as we tackle the rest of the Persona games in the series starting with Persona 2 as we hype up for the much awaited release of the Persona 5. If you liked this game, get it on the PSP or the playstation store for $20.