I have been looking forward to the Pillars of Eternity sequel ever since it was announced in 2017 by Obsidian Entertainment through a crowdfunding campaign. I was a bit skeptical about how it will turn out. It was like waiting for the next season of Stranger Things. You want to watch it when it comes out but you’re afraid that it will ruin the good that you’ve had before. Just like Stranger Things, the sequel is great even if you’re a fan of the fantasy genre or not. 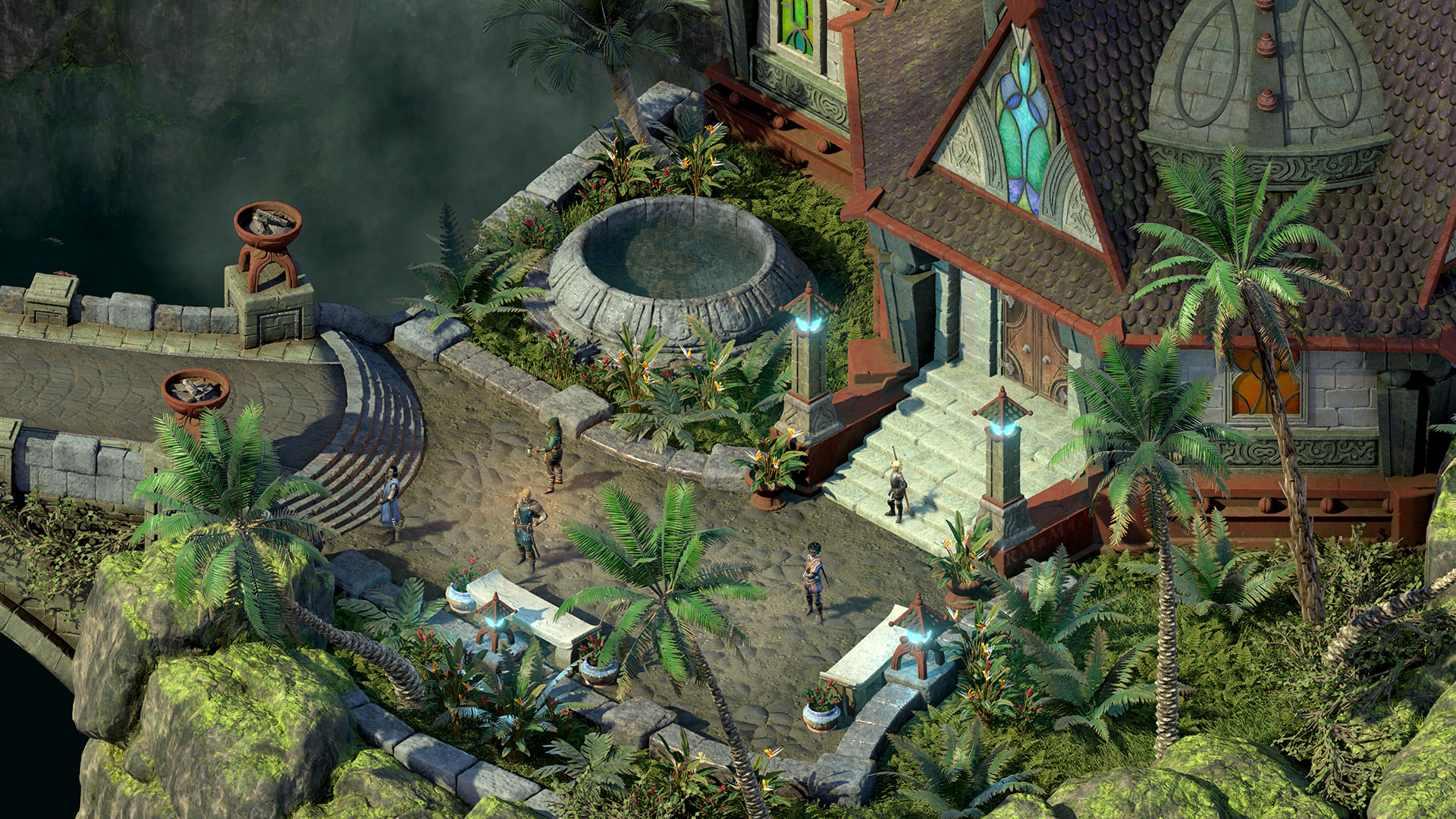 Platform Reviewed: PC
Platforms Available: PC (PS4, Xbox One, and Nintendo Switch later this year)
Developer: Obsidian Entertainment
Publisher: Versus Evil
Release Date: May 8, 2018
MSRP: $49.99
This review is based on a review code provided by Versus Evil.

Pillars of Eternity II: Deadfire is an old school roleplaying game just like Baldur’s Gate or Neverwinter Nights. It focuses on your character’s development and choices, the companions that you decide to bring with you, and the factions or Gods that you choose to side with. It does not focus on grinding because even the simple act of interaction can give you the experience you need.

The game is set in Eora, a world with elves, dwarves, magic, and deities. It picks up where it last left off where you are the Watcher, a being that is able to see souls. You are tasked by a goddess to save the world again but it is up to you how you decide to do it.

A good game provides you different ways to enjoy it. Pillars of Eternity 2: Deadfire, does that. The game’s difficulty ranges from Story, Relaxed, Classic, Veteran and Path of the Damned.

The story mode won’t bog you down with number crunching during combat. It allows you to focus on the world, the relationships between your companions and which faction you decide to side with. It’s made in a way that it feels like watching a TV series, like Game of Thrones but you get to decide which favorite character gets killed.

Classic requires appropriate managing of buffs, debuffs, and positioning. In short, there is micro-managing involved. If you’ve got no experience with games that are similar to this, then you should know that a lot of reading is going to take place. The tutorials are a step up from the previous game, but there is a lot of mechanics that can easily frustrate a newbie. However, it does get satisfying when you get your companions together and clear a whole dungeon by using combined skills, items and loot.

Path of the Damned, which I barely played, is only for the most patient out there. I tried it for a bit and died really quickly. That’s not exactly my idea of fun, that’s for sure. 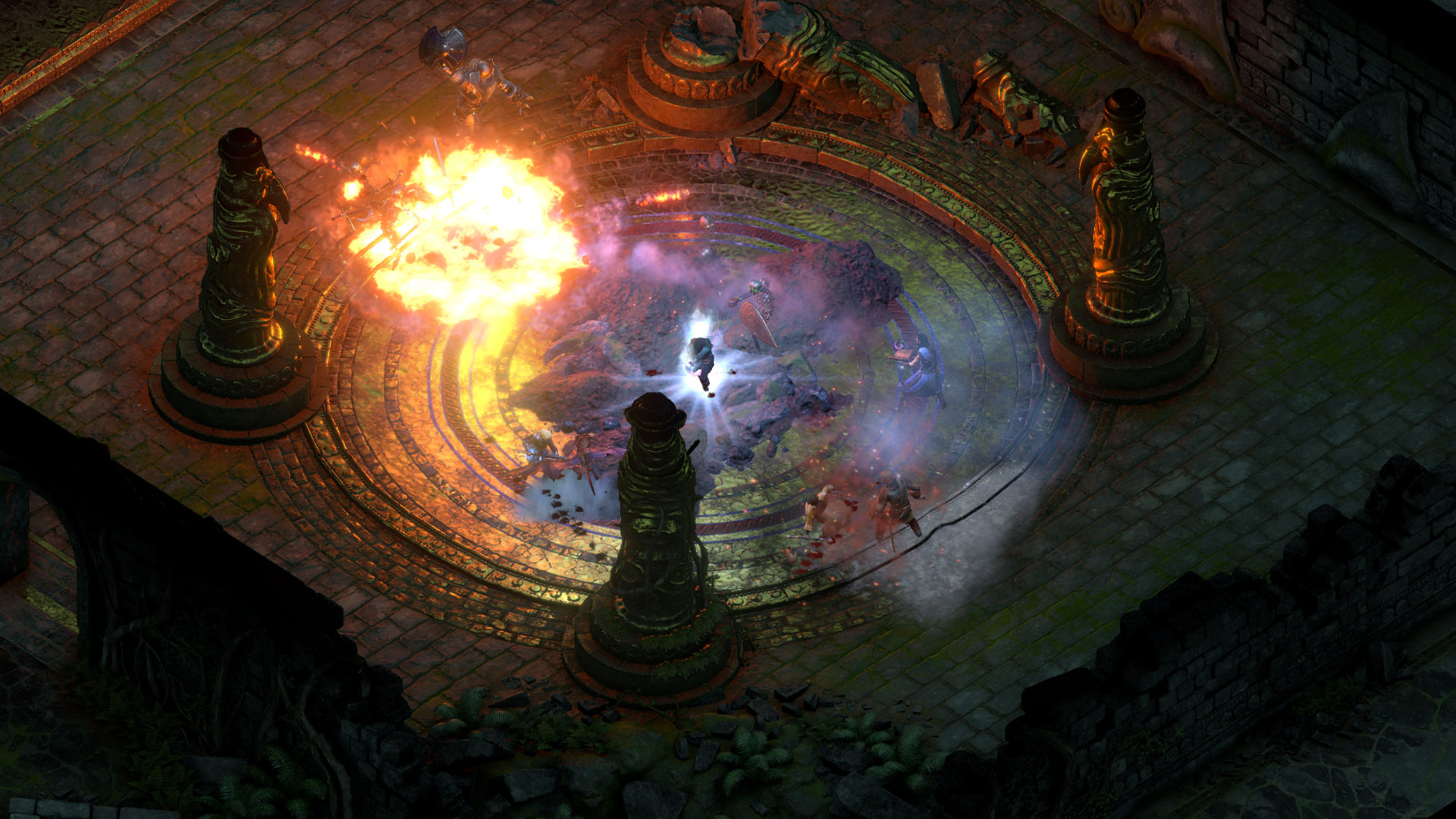 There are many quality of life additions, my favorite combo being the smart camera and the AI Customization. You can scout for traps without having to wrestle the camera unlike the first Pillars of Eternity. This along with the ability to customize your AI means that your support druid won’t shapeshift anymore and buff the right guys! I think that the change on retargeted spells was great. Long gone are the moments when your wasted a spell slot on a fleeing target.

The backer NPCs are no longer there. While I am thankful for all the players who funded the game, I disliked having them littered all over. There is no more hesitation to talk to random NPCs and I’m happy that they got rid of it.

When the news came out about having a ship instead of a keep, I was very apprehensive about the idea. I liked having a castle and building it up. I loved having a library and a talking statue. When I got to try it, the ship was an improvement! In the first Pillars of Eternity, you just had hirelings from your barracks. In Pillars of Eternity 2, they took decision making and exploring up a notch. There are times in your explorations where you can hire the living creatures that you meet as your ship crew. As fun and exciting exploring and customizing are, I wasn’t a fan of the ship-to-ship combat. I was expecting Sid Meier’s Pirates kind of combat, where you had a 3D representation of your ship and maneuvering it around. Instead, what we got were the storybook cutscene and number crunching. 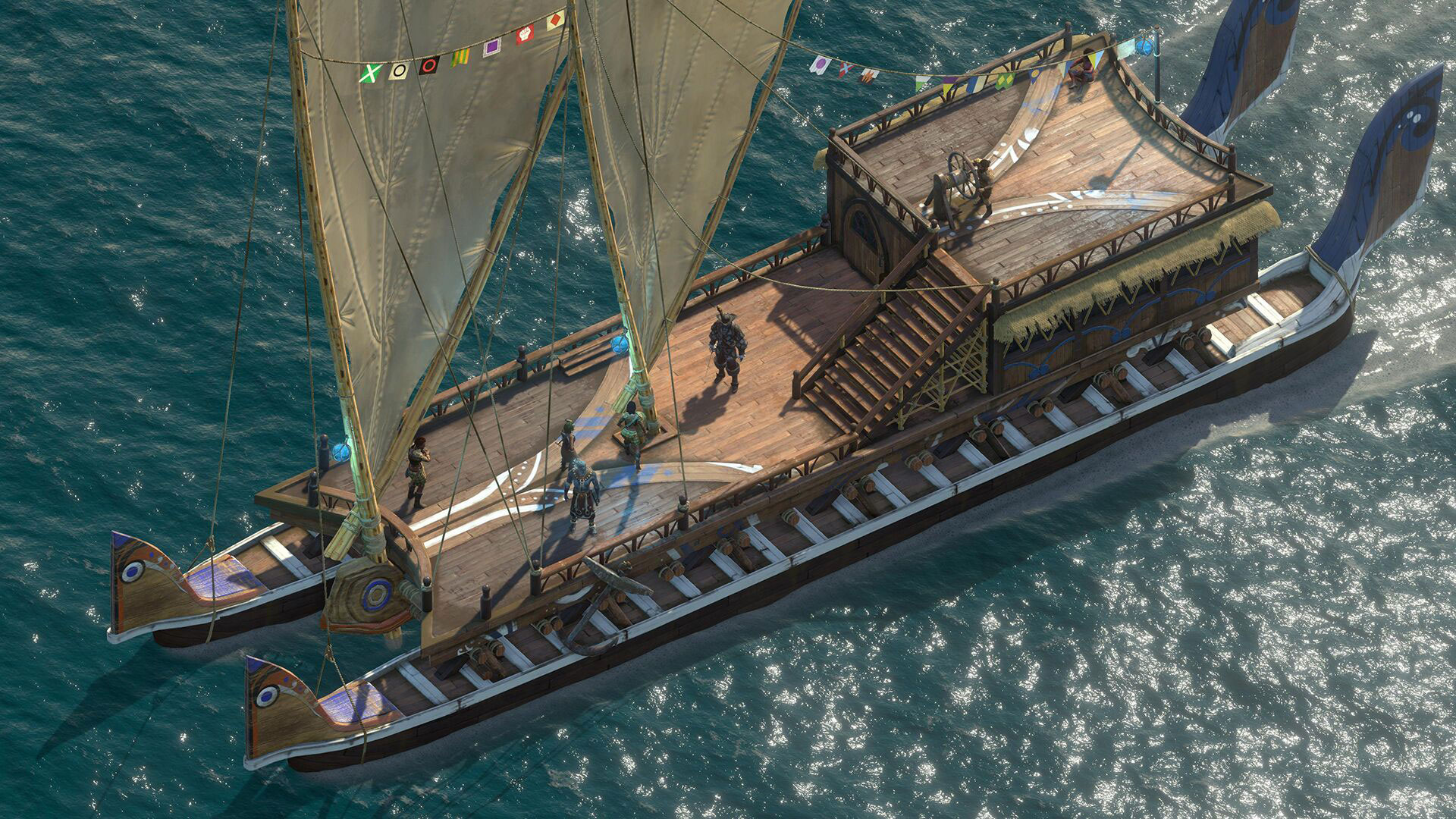 The graphics has been improved so much that I don’t want to play the previous Pillars of Eternity 1 ever again. Some part of me wishes that they could bring back Baldur’s Gate with this level of graphics. Examples of these are the detail of the different clothing and armors that are around, walking on knee-deep pools of water would slosh around your characters and pets, and while crawling in a dark dungeon, the shadows flickered appropriately relative to the wall. It is so realistic that when I was reading quest text while on the ship, the waves of the sea made me seasick. The animals finally look the way that they’re supposed to, although the bipedal stag for my druid was funny looking.

It’s amazing that the improvement on the magical abilities and buffs aren’t obtrusive. The special effects are flashy when they have to be, like throwing a rolling ball of flame towards the enemies can be flashy while dropping a circle of healing can get bright for a short while but disappear quickly enough so you can see the health bars become full again.

When it comes to immersion, music score and sound effects need to be top notch and they went all out. The music fits every scene and just evokes the right kind of emotion no matter where you explore. In a really dark dungeon, therefore you should feel like you’re in a thriller movie? Check. In a tavern by the sea and feeling much like a pirate? Check. It went above and beyond as far as immersion goes.

All the dialogue is voiced! I was really doubting this claim but I haven’t found one that isn’t. There are storybook cutscenes so it makes sense that those parts don’t get voiced because you don’t see a 3D model. Not only that but the Critical Role cast, a group of voice actors who stream their Dungeons and Dragons campaign, lent their talents for the main companions that you meet along the way. It’s one thing to have great voice actors and it’s another to have celebrity voice actors in your game. 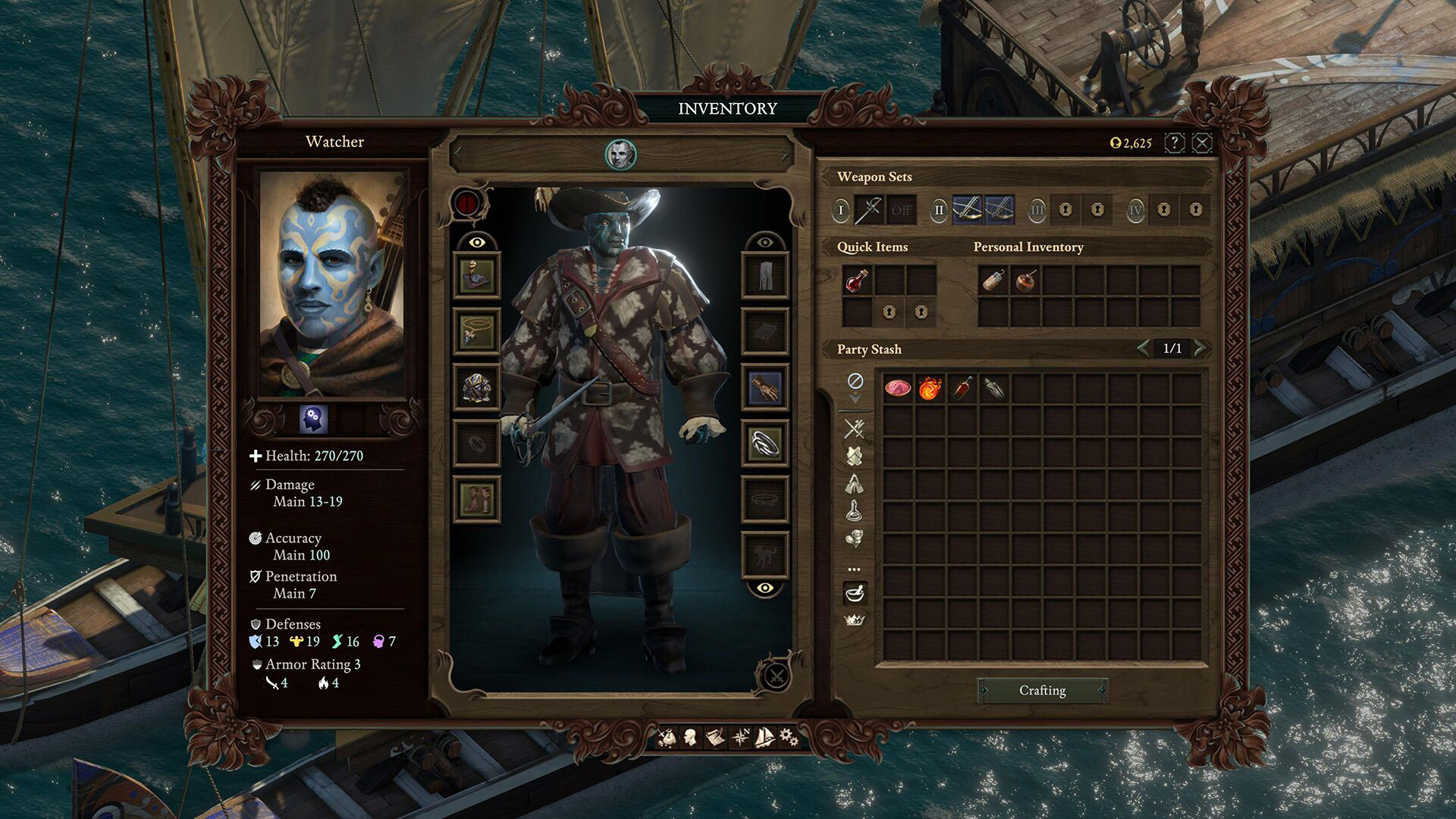 I would also like to mention the writing aspect. Reading through the dialogue, it makes me feel that players who didn’t try Pillars of Eternity 1 must have missed out a lot. Ever experienced like there’s some inside joke that the others are sharing and you have no idea as to what they’re talking about? It feels just like that. It does give you an option to know more about the history if you take time to read it. However, the game’s first impression makes you feel like you’re being singled out. On the bright side, there are so many response options that it didn’t make me feel like I had to settle with what choices that were given to me. The writing put the emphasis on moral dilemmas, not for the sake of progressing the story but developing your character and fleshing out the world as you see it.

I can see myself replaying Pillars of Eternity 2, several times actually. The revamped skill tree and the level cap of 20 promises a lot of builds. I am also grateful for multiclassing. There is also a system called Blessings of Berath where achievements of your previous game will give you goodies for your next playthrough.

All in all, Pillars of Eternity 2: Deadfire has delivered. Comparing it to the previous game, this sequel has better visuals, in-depth mechanics, and great story-telling. This sequel emphasized on immersion, exploration and shaping the world through decision making. It gave fans what they asked for and more and gives non-fans a chance to explore the cinematic story. It took nostalgia and dressed it up to something fancy. If you have the time and money, take a step back and save Eora. Buy this game. 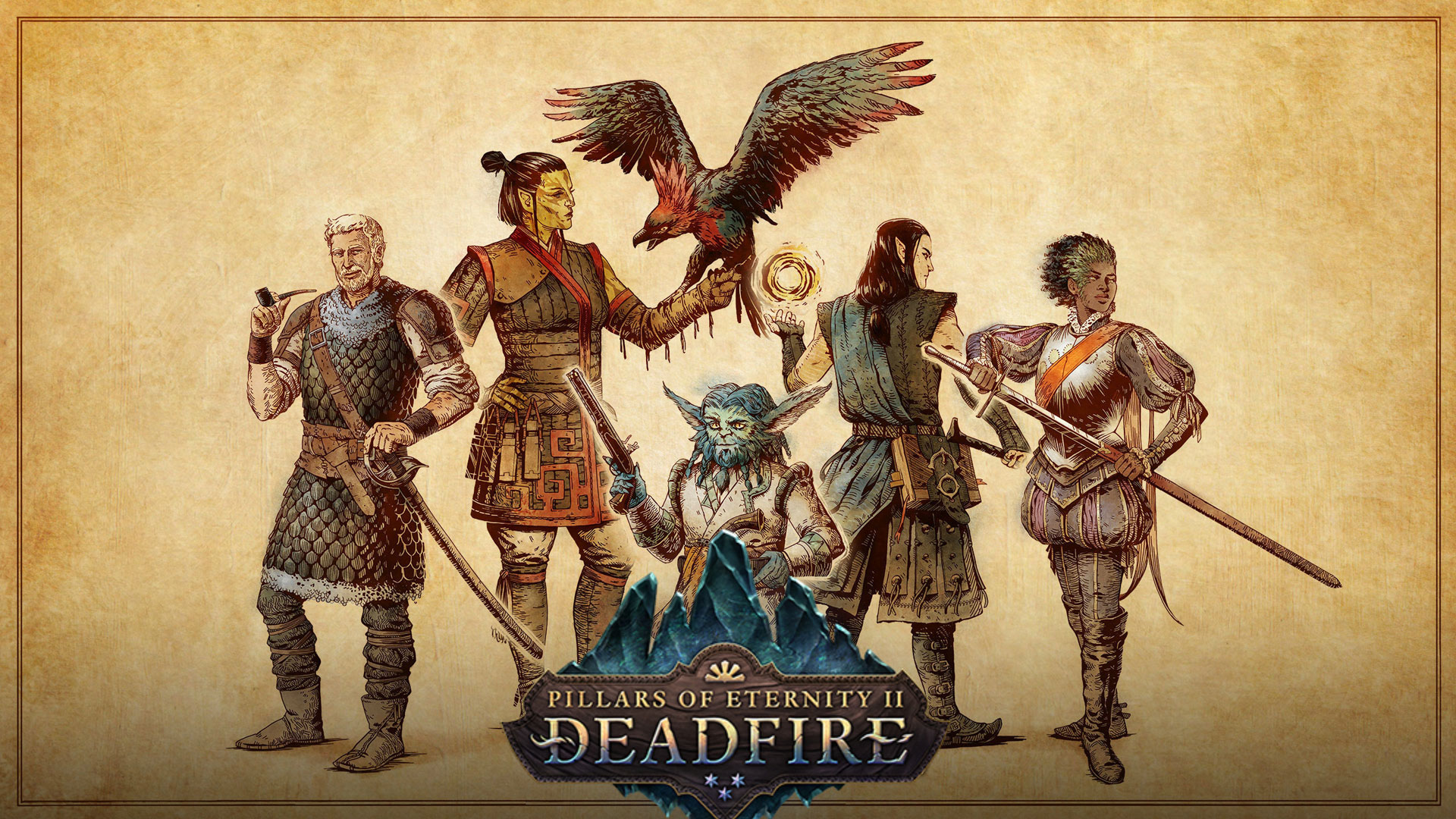 Pillars Of Eternity II: Deadfire - Review
Score Definition
When the issues of a game are rolled and stomped by its greatness, then it’s something to invest on if you have some spare.
Pros
Improved Graphics
In-depth Mechanics
Better story-telling
Fully-voiced dialogue
Cons
New players feel like being left behind in story/lore
Non-3D ship combat
8
Great