It's a big lineup for October! 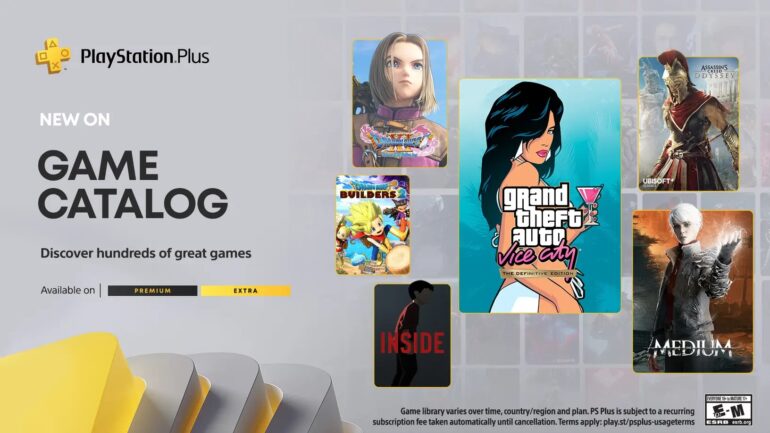 PlayStation fans will have a lot to try out this month as the latest PS Plus game catalog is full of games they would not want to miss, especially if they love JRPGs. The lineup includes a lot of Dragon Quest titles, more Assassin’s Creed games, and so much more.

Take on the role of The Luminary, the chosen one, but players run as they are hunted by kingdoms that are hatching a nasty scheme. Join with other companions to survive and overthrow the dark forces.

From an outcast mercenary, become a legendary Greek Hero and embark on your own legendary Odyssey in a world where every choice matters. Customize equipment, master new special abilities, and more.

Use the power of creation to battle against the reigning Dragonlord and restore peace to the shattered realm. Players must gather materials, craft items, and build everything that they could possibly imagine.

The sequel to the original game, it now offers a new single player campaign and a robust multiplayer building mode that supports up to four players online. Revive a forsaken world together with a mysterious companion named Malroth.

Dragon Quest Heroes: The World Tree’s Woe and the Blight Below – PS4

In the peaceful kingdom of Arba, man and monster live side by side, but suddenly the monsters attack the humans and go on a rampage. It is now up to the heroes to fight back against wave after wave of their former friends.

Hack-and-slash, field-roaming action RPG where players will be going on an adventure to restore order in a once peaceful world filled with monsters and battles. Each playable character has their own unique moves and abilities including a host of familiar faces from the Dragon Quest series with four new heroes.

A lone boy finds himself drawn into the center of a dark project. A narrative-driven platformer that combines intense action with challenging puzzles. It has been praised for its moody art style, ambient soundtrack, and unsettling atmosphere.

Play as fan-favorite Naruto characters and battle in multiplayer competitive combat by building a 4 player team. Go online and join up with friends to compete against each other.

Follow the revenge story of Shao Jun and execute the Chinese Emperor set in 16th century China. The game is in 2.5D with stealth gameplay and stunning art style that evokes traditional brush paintings.

Follow Arbaaz in his quest for retribution via a colorful depiction of Colonial India in 2.5D stealth gameplay. Use various assassin skills and weapons like the double kill moves and the chakram.

Dive into the aftermath of the Red October revolution in a 2.5D reimagining of the Assassin’s Creed universe set in 1918 Russia.  Play as the Assassin Nikolaï Orelov or Anastasia and discover their powerful abilities and versatile tools.

Play AC 3 all over again with enhanced visuals and improved gameplay mechanics. This also includes AC Liberation Remastered all solo DLC content are included. Fight as the Native American Assassin Connor to secure liberty for your people and your nation.

Play as Jacob or Evie Frye, two young twin Assassins, and lead the underworld organization. Grow influence to fight those who exploit the less privileged in 1868 London.

Become a flying kite-like being and travel the colorful world just waiting to be explored. Interact with characters, wacky toys, and peculiar environments to uncover some very strange secrets.

Here are the titles coming to the PS Plus Premium Classics game catalog: