Kiryu and the gang have landed on the Game Catalog! 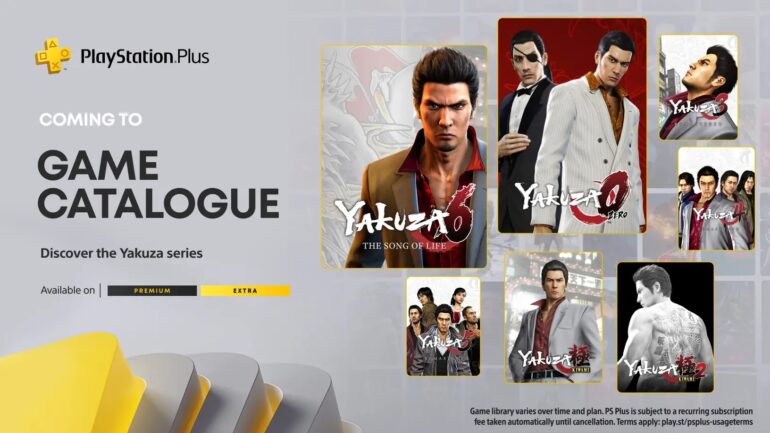 Sony Interactive Entertainment has recently revealed the new titles that will be added to the PlayStation Plus Game Catalog next month.

The PS Plus Game Catalog will be getting eight new games to its library and this is going to be great news for fans of the Yakuza franchise. Eight Yakuza games will be joining the gaming library in August 2022 and the lineup includes the very first titles of the Yakuza series, the prequels, the end of Kazuma Kiryu’s saga, and the new entry where Ichiban Kasuga is the protagonist.

Yakuza Titles for Next Month

Yakuza Like a Dragon will be available on August 2, 2022 via the PlayStation Plus Game Catalog and will be available PS4 and PS5 for Essential, Extra, and Premium/Deluxe. It will be free to download and own as long as you have subscribed to PS Plus. This is the title where the new protagonist Ichiban Kasuga joins the Yakuza world with his own story.

Yakuza 0 will be available in August 2022 for PS Plus Extra and Deluxe/Premium subscribers. This is not the original game, but a prequel to it which reveals the origins of Kazuma Kiryu and series regular Goro Majima. Learn how Kiryu becomes the legend of the Yakuza games that he is known for.

Yakuza Kiwami will be available in August 2022 for PS Plus Extra and Deluxe/Premium subscribers. This is the remake version of the original Yakuza game that debuted in 2005 for the PS2. Follow the early years of Kazuma Kiryu roaming the streets of Japan as a fledging yakuza henchman.

At a later part of the year, these Yakuza games will be joining the PlayStation Plus Game Catalog.

Yakuza 3 Remastered will be available only to PS Plus Premium subscribers. This will follow the story of Kazuma Kiryu that has retired from the yakuza family and has become a caretaker of an orphanage in the lands of Okinawa.

Yakuza 4 Remastered will available only to PS Plus Premium subscribers. This is the first time where the game will allow players to control multiple protagonists. These characters are a loan shark, a death-row inmate, a corrupt cop, and the legendary former yakuza Kazuma Kiryu.

Yakuza 5 Remastered will only be available to PS Plus Premium subscribers. It will still have multiple characters and this time it has increased to five. It will feature five major cities where its main focus is a big yakuza war.

Yakuza 6 The Song of Life will be available to PS Plus Extra and Premium subscribers. This is the end of Kazuma Kiryu’s saga as he tries to protect his young ward Haruto and discover the mystery behind the grievous attack on Haruto’s mother.

The new PlayStation Plus Game Catalog Yakuza games will be added starting next month.