The leak yesterday was on point! 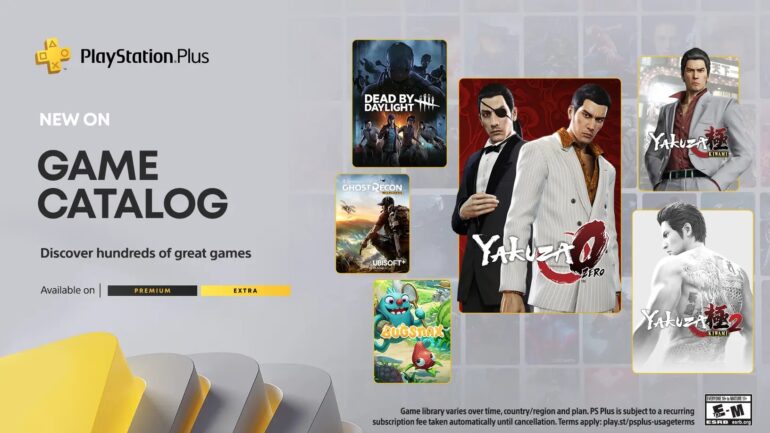 The new titles coming to the PlayStation Plus Game Catalog have been revealed and these will be available to download for PS Plus Extra and Premium members. These titles will be added on August 16, 2022. The headline includes three Yakuza games, Dead by Daylight, Tom Clancy’s Ghost Recon Wildlands, and the crazy bugs game Bugsnax.

Interestingly, Ghost Recon Wildlands was leaked ahead of the announcement yesterday.

Yakuza 0 will be available for PS Plus Extra and Premium members. This is the prequel to the original game revealing the stories of protagonist Kazuma Kiryu and Mad Dog Goro Majima before he went crazy.

Yakuza Kiwami is the remake version of the original Yakuza title that launched in 2005 on PS2. It features the story of Kazuma Kiryu as he comes back to the streets of Japan after he went to jail after being sentenced for a crime he did not commit in order to save his friend.

Yakuza Kiwami 2 is the sequel and remade for the PS4. The game has improved visuals and expanded it with a new adventure where Goro Majima stars. The game is set a year after the events of the first game where Kiryu is now on a quest to broker peace between rival clans and face off against Ryuji Goda.

Dead by Daylight is a 1v4 multiplayer game where the Survivors try to keep alive and escape from the clutches of an unstoppable Killer out for their blood. Work together to escape or just stalk and sacrifice every other Survivor.

Tom Clancy’s Ghost Recon Wildlands allows players to create a team with up to 3 friends and enjoy the ultimate military shooter experience set in a massive, dangerous, and responsive open world. They can create and fully customize the Ghost, weapons, and gear.

Bugsnax is also coming to the PS Plus Gaming Catalog for this month even though it was given away for free last time on PS Plus. Players will play the role of a journalist who has set out to Snaktooth Island after getting invited. Discover, hunt, and collect all 100 Snack creatures on it and gain their powers.

Other titles getting added are: