All 4 games that were leaked were real! 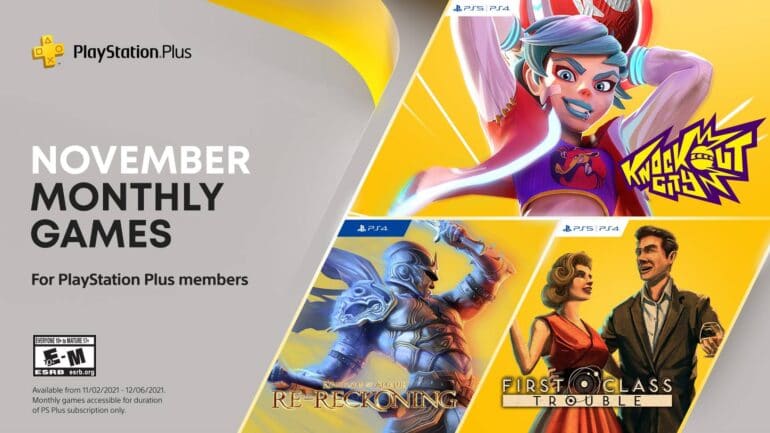 After the early leak yesterday, it has officially been confirmed by Sony Interactive Entertainment the six PlayStation Plus November 2021 free games.

There are six games that will be free to download starting November 2, 2021 for those who have subscribed to the PS Plus service. Also, the other three games are PS VR titles to celebrate the platform’s fifth anniversary. Just like what the early leak revealed, the four titles that got revealed early were Knockout City, First Class Trouble, Kingdoms of Amalur: Re-Reckoning, and The Walking Dead: Saints & Sinners. There other two that did not get revealed were The Persistence and Until You Fall.

Knockout City will be available on PS4 and PS5. It is basically a dodgeball game intensified into a whole new level. Offers online features, competition, and more.

First Class Trouble will be available on PS4 and PS5 as well. It is a social deduction party game with six players joining together online. Players will be given the role of a Resident or the Personoids, the prior being humans trying to get out of the hacked ship and the latter are robots out to stop and possibly kill the humans.

Kingdoms of Amalur: Re-Reckoning is coming to PS4. This is a remastered version of the original game with stunning visuals and refined gameplay. An intense RPG with customizable combat. Players can explore the lands of Amalur from the vibrant city of Rathir to the vast region of Dalentarth.

The Walking Dead: Saints & Sinners – Standard Edition is a PS VR game based on The Walking Dead universe. Players will be traveling to the ruins of New Orleans now infested with walkers. They will have to fight, sneak, scavenge, and survive each day, which turns more difficult as it passes.

Until You Fall is coming to PS VR, which is a sword fighting game. Players will grow stronger as they battle through numerous monsters in this hack-and-slash roguelite.

The Persistence is the last PS VR free game on the list. Players will be challenged to survive in a doomed deep space colony starship in the year 2521. Worst of it all, it is overrun with a crew that got mutated into monsters that are out to hunt you. It is up to you, the clone of security officer Zimri Eder to make your way down in the decks of the Persistence to repair and prevent it from being torn apart by a black hole.

Knockout City, First Class Trouble, Kingdoms of Amalur: Re-Reckoning will be available for download until December 6, 2021. The Persistence, The Walking Dead: Saints & Sinners, and Until You Fall will be available until January 3, 2022.