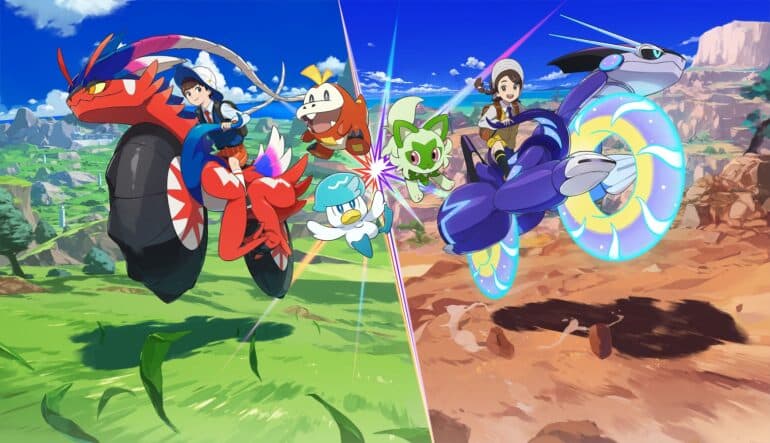 Nintendo has recently revealed new details about the upcoming Pokémon Scarlet and Violet titles including the Paldea region, new Pokémon to catch, and more.

Players will be starting their whole adventure in the Paldea region, which is a land of vast open spaces with lakes, peaks, wastelands, and mountain ranges. Discover diverse people and a variety of Pokémon living together in different locations, which ranges from a farming village with bountiful harvests to a port town with a bustling marketplace. There are also some Pokémon living in treetops, rivers, and other locations in the wilderness.

In the middle of the region is the largest city called Mesagoza. Players will be here to join either Naranja Academy or Uva Academy. The name of the school, its emblem, and its uniforms and other details will be different on which version of the game is played.

Rotom Phone has the Pokédex App

The Rotom Phone will have the Pokédex loaded as an app. Check the map of the entire region in the map app, which will show the current location. It will also show all kinds of information like towns, Pokémon Centers, and wild Pokémon.

The Terastal Phenomenon is only found in the Paldea region and makes the Pokémon shine and glimmer for some reason. When one Terastillizes, a Tera Jewel will appear above its head like a crown and its body will shine like a cut gemstone.

Those Pokémon that have Terastallized will gain special powers and it allows players to enhance their battle strategies by increasing the power of any moves that have the same type as their Pokémon’s Tera Type. There are 18 types so there are a lot of combinations to discover.

Players can only use Terastallize once per battle and will last until the battle ends. They will need a Tera Orb to make this happen, which needs to be recharged after each use. In order to do so, they will need to touch crystals overflowing with Terastal energy or just go to a Pokémon Center.

The Tera Raid Battles happen only in these games when three other players are going to team up to take on a Terastallized wild Pokémon. Trainers can find other players to join these raid battles via the Tera Raid Battle option. They can either choose to recruit allies or join a raid. To join in a raid with someone you know, they will need to set a Link Code. It will have a time limit and allows players to continue attacking seamlessly without having to wait for other Trainers to choose their actions.

Players can trade and battle with Trainers all over the world with the feature Poké Portal.

The new Union Circle feature is added to the Poké Portal which will allow them and up to three friends to go on adventures together in the same space.

He acts as the director of the academy and will teach the player many things about their school.

Mr. Jacq is very knowledgeable about Pokémon biology and is the developer of the Pokédex app for the Rotom Phone. He’ll also be the player’s homeroom teacher.

Arven is an upperclassman at the academy. He’s good at cooking and is researching healthy recipes that can help Pokémon feel better.

Penny has a bit of a shy personality, and for some reason, she doesn’t seem to come to the academy very often.

Grusha used to be a professional snowboarder, but he is now the Gym Leader of the Glaseado Gym full-time. He is an Ice-type specialist who has Cetitan as his partner.

Aside from the new regional Pokémon found across the two games, there will be different species of Pokémon appearing depending on which games players are playing.

Fidough’s skin has elastic qualities and is both firm and soft at the same time. When these Pokémon become excited, they intimidate their opponents by puffing up their bodies to appear bigger. Fidough ferments things in its vicinity using the yeast in its breath. The yeast is useful for cooking, so this Pokémon has been protected by people since long ago.

In ancient times, Wooper lived underwater in the Paldea region. After losing in a struggle for territory, it seems they began living in bogs on land. To keep from drying out while living on land, they began to cover their bodies with a poisonous film. Their gills have hardened thanks to living on land for so long. Their bodies are heavy and they move slowly, but they can protect themselves by shooting powerful poisonous liquid from their gills.

Cetitan need to have tough muscles to be able to support their immense bodies, and physical attacks using their bodies have incredible power. They also migrate around the snowy regions, protected by a thick layer of fat.

The Legendary Pokémon Koraidon and Miraidon, depending on the game, will meet with the players at some point in their journey and join them. They are a mystery and are said to have the power to surpass other Pokémon. They can change forms to suit what they are doing or what terrain they are traveling on.

Here are some of the purchase bonuses that players can get when buying Pokémon Scarlet and Violet:

By purchasing Pokémon Scarlet or Pokémon Violet early, players will receive a special in-game Pikachu as a gift.

This Pikachu has two unique characteristics:

Players can receive it by choosing Get via Internet from the Mystery Gift feature in their game, up until Tuesday, February 28, 2023.

Buying the digital version of the game from the Nintendo eShop will net players the Adventure Set. They must do this before February 28, 2023.

There is a special bonus for purchasing the Pokémon Scarlet and Violet Double Pack. Players get two codes (one per game) that will reward them with 100 Pokémon Balls.

Pokémon Scarlet and Violet launches on November 18, 2022 exclusively for the Nintendo Switch.

Here are the screenshots provided: