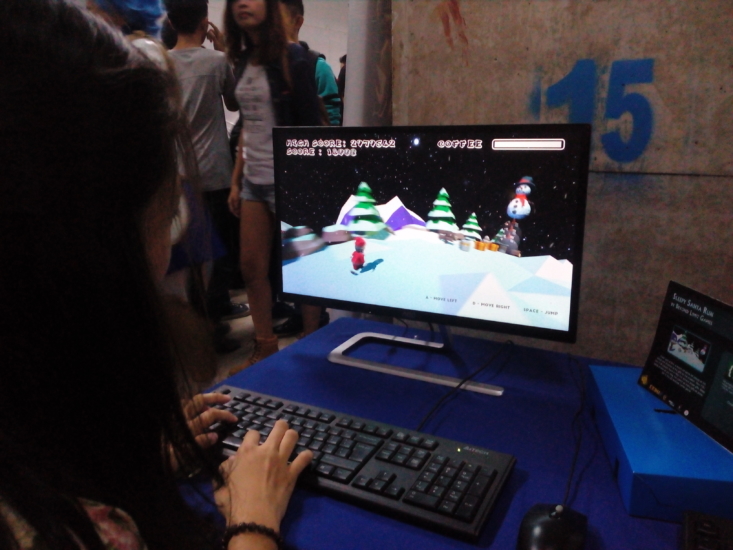 Apparently Santa dropped his presents when he fell asleep on his sleigh, and now it’s your job to help him gather all of them while trying to keep Santa awake!

Sleepy Santa Run is a 3d endless runner game where the main objective of the player is to gather as much collectibles as possible while playing as Saint Nick himself. All this while trying to avoid whatever projectiles the deadly floating snowman is trying lob at Santa.

Developed by: Beyond Limit Games

Those who are familiar in playing games such as Temple Run or Subway Surfers will definitely have a blast with this game. The controls are all too simple, use the A and D keys to move left and right respectively and use the spacebar to jump. All you have to do is avoid the incoming projectiles and collect coffee that can be found during the run to ensure that Santa stays awake. Collecting presents gives you points and this game is meant to be played competitively to see who can overtake the other’s top score.

The game begins like every other running game, you start off slow and the further you go, the faster and harder the game becomes. The one thing that defines this game from the other endless running games is that it has a coffee meter. If Santa’s coffee meter depletes completely, the screen will look like an eyelid that’s trying to shut itself to make it feel as if Santa is close to falling asleep. The less coffee Santa has, the further the eyelid shuts. While this is a very interesting mechanic, there has never been a time where a player has died due to there being an abundance of coffee to collect all throughout the game. There were even times where the coffee meter began to bug out as it kept stating that it was depleted even though Santa was nowhere near to falling asleep.

The one thing that does ruin players is how sometimes there are just some objects that are too difficult to jump over, even though it’s the only way to do so.  The way the snowman lobs snowballs towards the player is fair, but will definitely get harder as the game progresses.

Overall, the game just felt like every other 3d endless running game. The only difference being the winter holiday theme and the coffee mechanic that doesn’t even affect the game that much at all. While it’s still a good game, it felt as if something else could have been added to it so that it could be considered something really special.