Red Dead Redemption 2 Review – The Good, The Weird, and The Bad

A gang of no do-gooders trying to be one step ahead from the law. The law that is not always too far behind. A family man who couldn’t keep his family together because of his loyalty to the gang. A wilderness that’s full of dangers around every corner. Welcome to the wild world of Red Dead Redemption 2.

Red Dead Redemption 2 is a prequel to the previous game. Most people were thinking they weren’t going to see John Marston on this one but it so happens that John Marston is actually on this one and this story revolves around how John Marston was once part of a band of outlaws and realizing in the end that it was no longer good for him.

But the main character for this game is not John Marston but the very loyal outlaw named Arthur Morgan. He’s second in command to James Van der Linde the leader of the gang and the one who’s calling all the shots. As Van der Linde’s second in command, it was up to Arthur to keep the gang together. Ensuring that everyone is happy and well fed and living comfortably. It was up to him to find a spot for them to live in. Ensuring that their gang is safe and away from the prying eyes of the law and other gangs.

I haven’t really played much of the first Red Dead Redemption so I’m playing this game fresh and no knowledge of what could have been improved in terms of gameplay from the previous game. Though it seems that you don’t need to have played the first game to have an idea of what the story is since this is essentially the beginning of what the story is.

The world of Red Dead Redemption 2 is vast and there’s plenty of things for you to do. It will also take you some time to finish the game especially if you get sidetracked with all the things that the world has to offer you.

Let’s start with the basics. The world can be viewed in three distinct perspectives, either first person, third person or cinematic mode. There will be parts of the game that will force you to view it in first person but it’s part of the storyline so it’s not really a big deal. I usually play in third person because first person mode usually gets me nauseous. Cinematic mode isn’t really a good way to play the game but it does add a dramatic effect especially if the game warrants it. There was that one scene I played where it was best played in cinematic mode especially that it’s accompanied by great musical background. And by the way, RDR2’s music is awesome and lets you get into the Wild West feels.

The gun controls are something that needs getting a little used to. Where in other games, you might be used to just pulling the trigger button and it automatically fires a bullet. In RDR2, there will be times that pulling the trigger after initially firing will mean that it needs to load up another bullet for you to fire. This does not happen to all guns but most of the guns have this “feature.” It’s supposed to make you feel like you are really at that time and that guns work that way in that time. Which does make this game more authentic.

Aside from gunplay, you can always fight enemies by punching them in the face. The controls are a bit wonky though because the timing of the punches don’t really coincide whenever you press a button or the block is not really that effective. And you can’t seem to bring out your gun during a melee brawl. Like why am I not allowed to just shoot someone in the face when I have this big rifle hanging in my back.

Travelling the world of RDR2 can be done in so many ways. You can go on foot, ride a horse, ride a wagon, ride a boat, a train, a coach and even in this one mission, you can ride a hot air balloon. You can also fast travel to places you’ve already visited but this does not get unlocked until you have upgraded the living quarters of Arthur. Also, fast travel only seems to work one way, so you can’t fast travel back to your camp. Which makes this game a little more realistic than your usual game. I do not use fast travel often though as I prefer to just take in the environment which by the way looks very beautiful. I sometimes just stop and take in the scenery and the beauty of its landscape. You also encounter random events when you travel the land. Who knows you might end up helping someone in need and getting a reward in the process. Other times, you might be encountering hostile people who will try to kill you or rob you or both.

In hostile situations, you have the option to defuse the situation and try to talk down the hostile person. But if that’s not to your liking, you can always just have your gun talk for you. Speaking of options, there will be situations in the game where it will ask you to choose between two things. Whether to help someone or not help someone. Or even just not choosing an option and letting the game choose for you. Most of the time this happens during cutscenes at crucial moments in the game. Some of it will open new missions for you to do. While some options will mean you will no longer pursue that storyline. Some options appear during encounters and from your companions in missions. If you’re not used to how to talk to people in this game, you might miss out on some of these options but once you get into it, you will find so many opportunities for you to shape the game the way you like it.

The realism of this game also extends to your character. Choosing the right outfit will determine the temperature of your character. Eating or not eating will change your character’s weight which will affect his health points, where you take more damage if you’re underweight. Getting enough sleep will affect your energy points and how fast it will drain. You will also have to be mindful of what you eat since there are certain food that will increase or decrease your health. Like eating junk food will likely get you to become overweight or smoking cigarettes and drinking alcohol will drastically drain your energy. Some factors will also affect your Dead Eye.

For those new to the series, Dead Eye is an ability that your character has, where the game goes into slow motion mode and you can have more time to kill enemies. In time, your Dead Eye will evolve and will let you do other things like marking targets or being able to see the critical areas of a target. Dead Eye will also help you identify areas of interest in the game.

Even with all this realism though, I find it that it didn’t really affect how the game turned out to be. Like I didn’t even notice that my character was already underweight and yet I still somehow managed to finish the game, aside from the fact that he died countless of times but still you can finish the game without worrying about all these realism factors. Also, all these realism factors applies to your horse as well. So if you’re some sort of perfectionist you might want to really keep an eye on your character and the horse.

Physics seems to also have an impact on this game. So colliding into a tree head-on at full speed will have your character getting a concussion. Gravity is also very real in this game. So don’t expect your horse to jump off a cliff and survive the fall. Luckily, there’s a horse reviver item that will bring your horse back to its pristine condition but if you’d rather not waste money on such things, you can always opt to mercifully end the horse’s suffering and buy a new horse instead.

Aside from the main missions in the game, there are plenty of other activities that you can do in this world. There’s fishing and hunting where the game even goes as far as showing you the actual skinning of an animal. There are side missions from strangers that you get to encounter in the world, offering to reward you with money for helping them out or collecting things for them. There’s gambling where you can play blackjack and poker. There’s treasure hunting where you need to find a certain location based on hints from a treasure map. There are tons of other activities that you can do but it’s better if you discover them yourself.

The story is pretty good but it will take you awhile to get through all of it which is good for its price. That means there’s a lot of content to keep you interested. And even if you’ve already finished the main missions, there’s still lots of other activities for you to do. There’s also Red Dead Online for you to get into which will have missions for you to play together with people online. The one thing that I feel the game needs to improve on is how there are still bugs in the game even after a few patches already in place. Some of which were game breaking that I had to close the game and start it up again. I also find that the NPCs seem to have a suicide mission almost all of the time, because I tend to fail a mission because my companions were shot dead. I’m not really sure if this was intended but it was really frustrating how you also have to worry about the NPCs dying unless of course if the story intends for that character to die.

Overall, Red Dead Redemption 2 will have you longing to fight alongside the Van der Linde gang and pursuing other gangs or fishing in the wild or having a bar fight at the saloon. The game will have you playing it days on end and just have you riding into the sunset in its vast wild world. If you’re looking for a game that is worth its price, then you don’t need to look further. 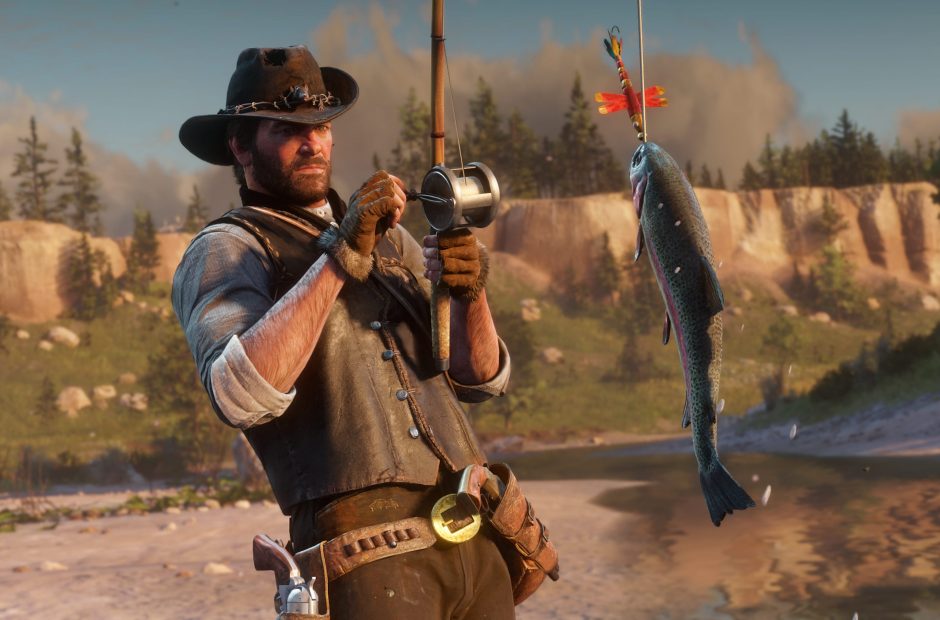 Red Dead Redemption 2 Review
Score Definition
May it be the likes of Shadow of the Colossus or Metal Gear Solid, if it’s quite there but not enough to push the boundaries, it’s still an awesome game.
Pros
Realistic gameplay
A living world with lots of activities
Great storyline
Cons
NPCs want to die
Random bugs
9.5
Excellent