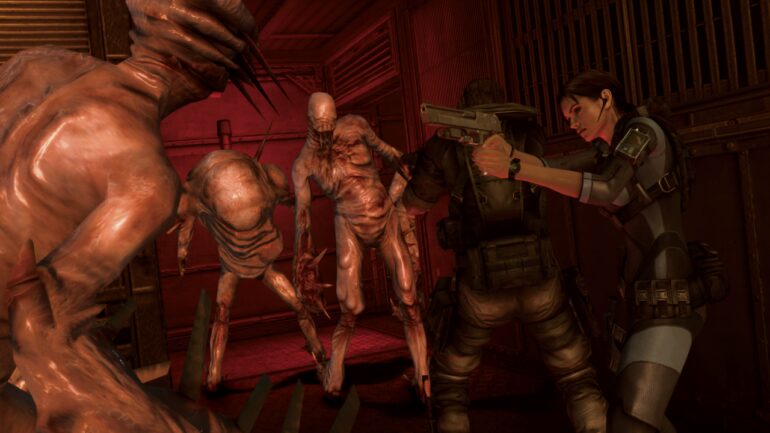 Resident Evil has been quite well known for being rather over-the-top recently and detracting from its horror roots in favor for a more action oriented franchise.

Before Resident Evil 7 came out, we were presented with Revelations which took place between the events of Resident Evil 4 and 5. It isn’t a numbered entry into the series but presents itself as its own game.

Can it truly match up to survival horror standards or will it follow the action oriented gameplay of its predecessors? Will it be worth your time and money?

Read this review and find out! A ghost ship can be an interesting setting for a survival horror. This is where the majority of Revelations will take place.

The game starts off with Jill and her new partner, Parker, being sent off to a ghost ship to look for the missing Chris Redfield. The plot doesn’t really come off strongly at first and you may find yourself not too invested with what the story has to offer seeing as it doesn’t really get interesting until halfway throughout the story.

Most of the game does stay true and give you a legitimate horror atmosphere. At other times, it gives you an adrenaline rush by throwing waves of infected enemies your way. 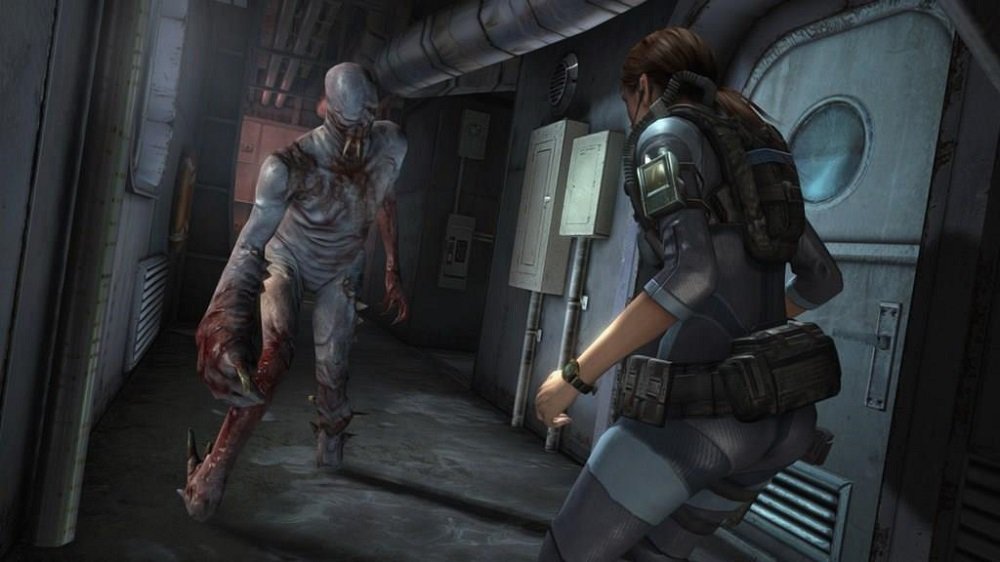 Like Resident evil 5 and 6, Revelations gives you an AI partner throughout the game. Though it can be somewhat break immersion when you realize that enemies more often than not ignore your partner to go after you. Despite this, their presence can somewhat elevate the more scary feels of the game and makes you feel like you have someone who has your back. When they do leave you and you find yourself alone however, the atmosphere can suddenly become very scary as you’re forced to roam through dark corridors by yourself until you’re partner finally joins back in. For most part, your AI partner leaving you is just a paper-thin excuse to leave you alone for the segment of the game while they do something that isn’t really important or beneficial. You can soon find out that the lack of their presence really makes the game scarier which doesn’t really stick for most parts.

Unfortunately, despite the presence of a partner there is no option for co-op in the main story and can only be done during Raid Mode which is the only other mode besides Story Missions.

Raid Mode can be very boring and lackluster. You’re pretty much just moving from Point A to B until you reach the end in which you have to break a levitating coin in mid air to finish a level. Raid Mode clearly tries to keep you entertained with a few mechanics and gimmicks such as weapons customization and character selection as well as different outfits, you’ll find yourself staying clear from this mode as there is hardly anything to gain from playing it. Mercenaries was much superior in terms of enjoyment and entertainment.

Speaking of weapons customization, you do have the option to do that here. It’s not as simple as attaching a laser target under your pistol or a holosight on your rifle. Weapon customization here is made via parts which you will find throughout the campaign on the main story quest and buying them on the shop and mission rewards in Raid Mode. Parts will help increase the power of a weapon, rate of fire, number of bullets and etc. 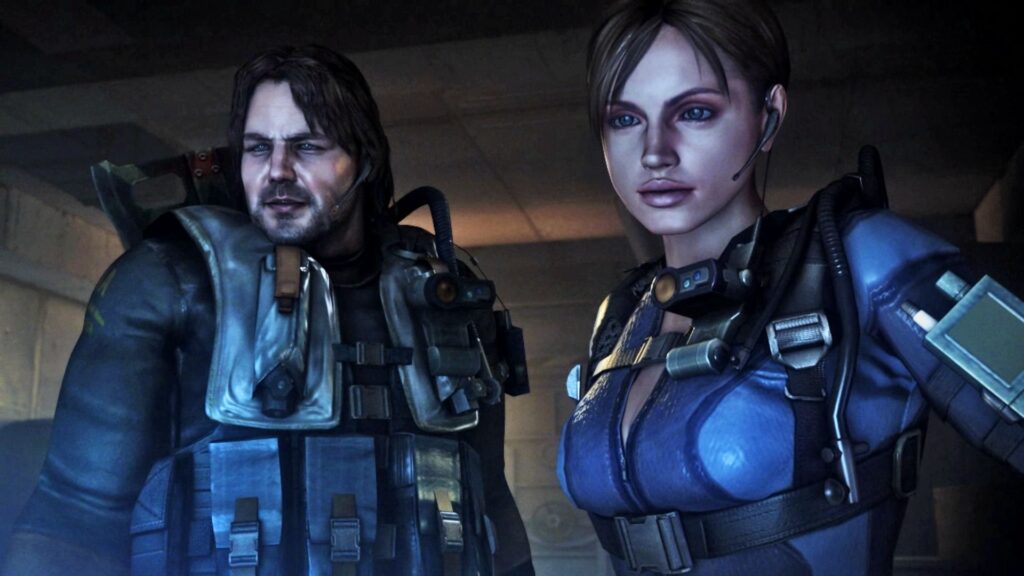 In Revelations, you’ll find yourself playing under the perspective of more than one character. Besides Chris and Jill, you’re introduced to a new cast with their own personalities. Parker for one is clearly a copy of Barry Burton right down to the personality and massive size. Other characters don’t leave too much of a good impression since they come off as a bit over-the-top and stereotypical in both design and attitude but they do have their key moments that help you care for them more near the end. 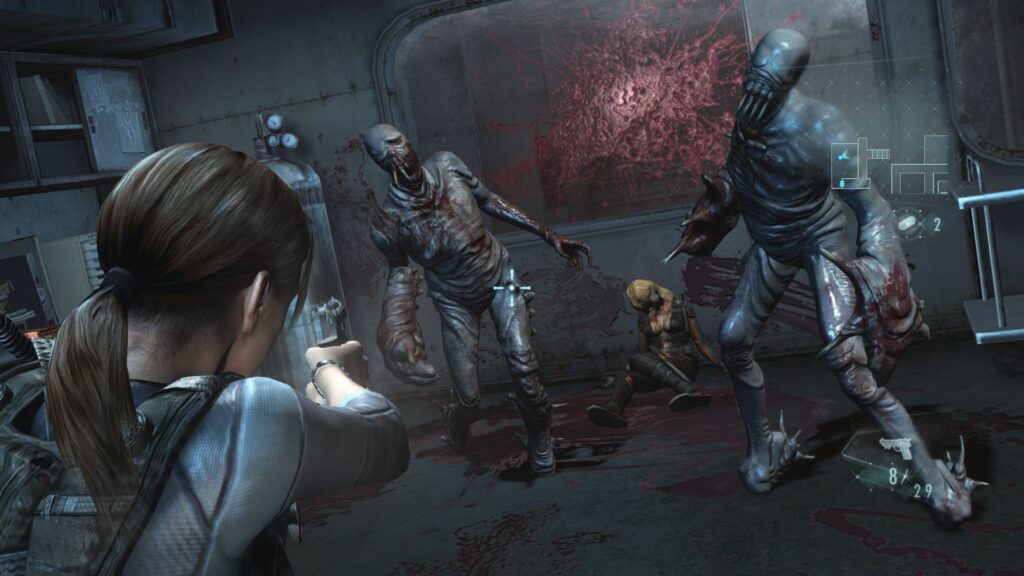 Enemies are much more monstrous in Revelations than in any other Resident Evil game. Their designs are more like monsters straight out of hell than grotesque reanimated corpses due to a failed science experiment. Their movement as well can be described as creepy and “doll-like” much like the nurses of Silent Hill. In higher difficulties they are a force to be reckoned with.

Ironically enough, the game manages to be scarier when its quiet in contrast to when its loud and surrounded with a surplus of monsters thrown your way. Revelations can be quite inconsistent with its pacing at times and seems to be fond of switching from horror to action back and forth. It sometimes gives you dark quiet hallways to explore that truly gives you that sense of dread true to survival horror. At most times, it gives you an action packed scenario by throwing infected your way forcing you to waste bullets. 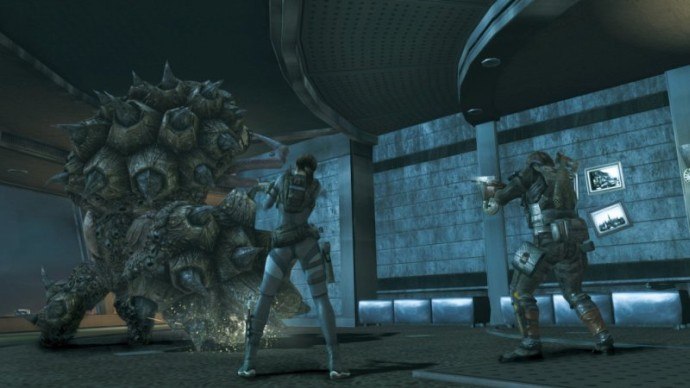 There are bosses in this game, and they can be hell to beat. All of them take quite the punishment before going down for good and they’re even worse in Raid Mode where their health is maximized for sadistic torture forcing battles to be long drawn out and tiring. If you’re adamant in playing Raid Mode facing against a boss, you’d do best to have a person join you in co-op to take it down together. Though, you might find yourself having a hard time finding anyone online as the game doesn’t seem to have many players playing on the mode alone. Though the experience might be different depending on when you get the game.

Unfortunately, despite being a remaster nothing’s really changed. Graphics and textures aren’t really all that different from the previous console generations. Overall nothing’s really been added into the game despite it being remastered for a newer generation.

Resident Evil Revelations isn’t bad. It isn’t anything like Operation Raccoon City which was a complete disaster.

Though this isn’t to say that the game is flawless. Characters can come off as cliche and not really all the interesting. The story isn’t quite gripping from the start and some of the character designs are questionable at best. 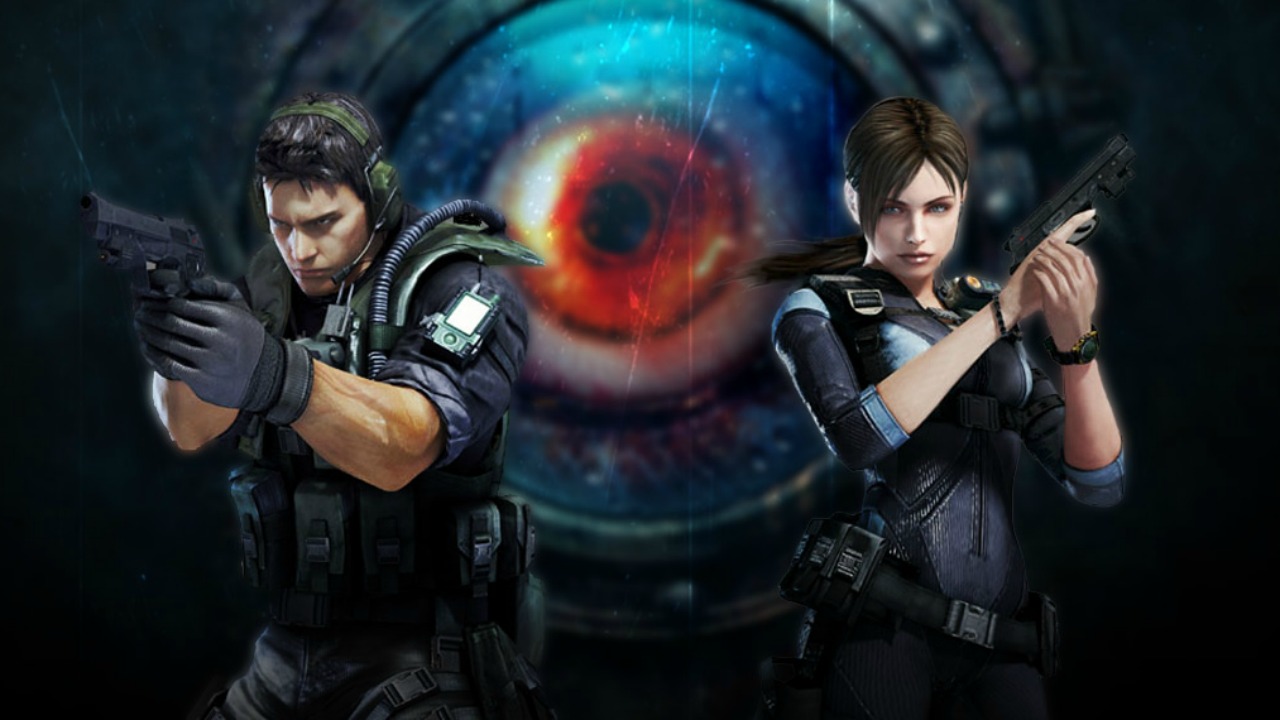 Resident Evil Revelations - Review
Score Definition
We tell you, it’s a good game! It’s not average! It might have some problems here and there, but you have to admit it is a “Good” game.
Pros
Good survival horror in general
Great horror atmosphere
Cons
Boring Raid Mode
Bad and cliche story presentation
Generic characters
7
Good