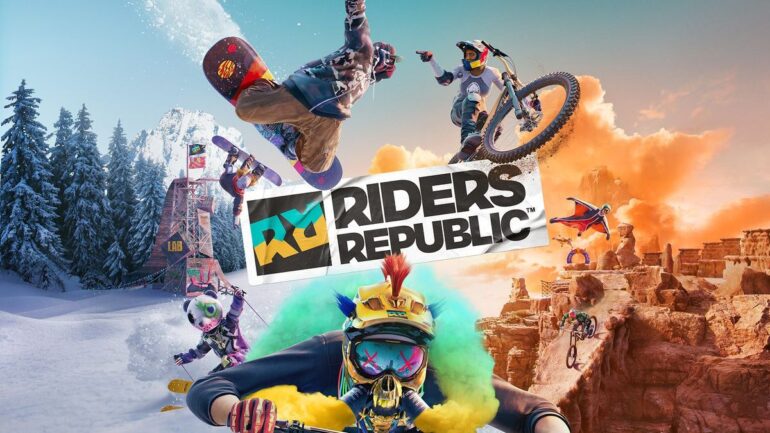 The sports genre in video games is a dangerous ground to tread on. Die-hard fans and casual players of sports games know this. Some sports games in recent history have easily fallen into a void where inspiration and technical proficiency are absent and financially predatory techniques are so evident, they might as well ask me for my bank information just as I boot up the game. Others, however, remind us that there’s beauty and energy in and around this genre a studio can tap into, should they be willing to do that. Thank god Ubisoft Annecy created Riders Republic a solid proof of the latter.

After creating Steep, the studio’s previous title, Riders Republic very much feels like a result of Ubisoft Annecy stretching their muscles. In this game, the studio improves on the things they already know and incorporates new things that feel symbiotic to the core mechanic and theme of the game, all for the sake of the player’s enjoyment. The skiing, snowboarding, and wingsuit flying gameplay that was in Steep makes a return in this title and is now accompanied by biking and rocket suit races, among so many others.

Right off the bat, the best reason to play this game is its electrifyingly fun gameplay. Whenever you’re up and running, participating in whichever event on any given sport that’s available in the game, the amount of fun you’ll have skyrockets to the heavens. Doing races and challenges in this game never gets old, and it also helps that there are various sports that you can do so you can diversify your experience.

When you first step into the game, you’re greeted by a multi-sport race that starts you off with biking, then with a rocket suit halfway through, and with skiing by the end. This decision to make the intro a multi-sport race is a great way of introducing a player into this world. The game is packed with content, events, and activities beyond just those three sports, but their usage in the intro offers great glimpses on what the player can expect moving forward.

After the game’s “introduction”, so to speak, you are then left to your own devices to do as you please. You’ll be mainly doing biking races and events early on. The bike you have at the beginning of the game may also have steering limitations that will make the gameplay more challenging than it should be. However, as you progress and complete more events, you will earn more and better gears, making the races feel more fluid, swift, and more enjoyable

The events themselves feel very well made. The placements of checkpoints in these events and races are well-thought-out. They make the experience intense and enjoyable enough without being overly insane. They force you not only to be fast but also to be careful of the terrain you’re on, whether you’re surrounded by trees, on an icy landscape, or even when you’re taking to the skies.

Aside from being fast, you also need to be masterful with tricks if you want to excel in this game. Getting used to performing tricks in this game can take time, but they’re very satisfying whenever you nail them. They’re easy enough, but not too easy that it makes the gameplay boring. There are also assists you can toggle on and off from the game’s menu which either makes performing tricks easier and more accessible or more challenging and fulfilling as you’ll be in full control of your avatar while doing the tricks.

More sporting events will get unlocked as you earn more stars and your level becomes higher. The more time you spend in this game, the more content is presented to you. Eventually, you’ll have access to every sport and challenge variation in the game, which opens the game up beautifully.

Speaking of challenge variations, you will also get the chance to participate in silly events from time to time, like driving a pizza delivery bike to deliver pizza around a certain area. As bizarre as these events are, they fall right into place like a puzzle piece to the entire picture that is this game. Ubisoft Annecy knows exactly what kind of game they’re making and what the players expect from this. The game doesn’t take itself too seriously and it’s all the better for it.

Every once in a while, you can also participate in multi-sport events, which have you race in multiple sports in one event, similar to the game’s prologue. Although these sports are already fun individually, putting multiple of them in one event can provide a different experience altogether. It encourages you to adapt and adjust. It reminds you which particular sport you’re better at and which you need to work on.

Another fun factor that comes into play during these multi-sport events is how the music changes whenever you shift from one sport to another, adding a level of immersion that makes the experience even more exciting than it already is.

However, there are some multi-sport events that include sports you may not have tried yet. Although the control scheme remains similar across the board, their fluidity and gravity do not. Reaching a career level threshold and unlocking a new sport career, getting introduced and given tutorials to that sport’s mechanics when you’ve already encountered it in a previous multi-sport event can feel very unnatural.

The biggest gripe I have with the game, especially during events, is how unintuitive the camera can be. It’s almost as if the camera perspective just can’t keep up with how fast-paced the movement of the races can be. You can switch to a first-person perspective to remedy this issue, but in a lot of cases, and depending on your preference, it is much better to utilize a third-person perspective during these events so you can observe and react to the world around you and not just the terrain ahead of you.

During events, you will earn a star as long as you finish the race or event, whether or not you win. This highlights the central mechanic of this game: having fun. The game is not about winning, it’s about exploring and having fun. However, the game also incentivizes winning by giving the winner more EXP. Completing some side objectives, which grants the player more stars, also requires the player to actually win an event. Just because you don’t have to win, doesn’t mean you shouldn’t strive to be as good as you can be at it.

It’s also quite incredible how massive this game’s world is. This game is set in a world that is an amalgamation of seven American national parks: Bryce Canyon, Yosemite Valley, Sequoia Park, Zion, Canyonlands, Mammoth Mountain, and Grand Teton. If that sounds grand, that’s because it is. Exploration in this game can be a whole lot of fun if you decide to travel from one place to another manually instead of fast-traveling.

There are hidden events in the game, among other things, you will never discover if you just fast travel constantly from one place to another. You can move around the world by whatever mode of transportation you’ve already unlocked, depending on your career level. This means you can even take to the skies if you already own a rocket suit, which is a whole lot of fun in and of itself.

Exploration in the game can also have a sense of serenity given how gorgeous this game can look at times, which is a nice change of pace to the fast-paced and energetic action of the events. You can easily have as much fun just biking through the world’s various mountainous terrains, skiing in snow-covered slopes, or taking in the view from above while flying with your rocket suit, taking in the beauty of the digital world around you.

Because this is an online game, the world itself feels very alive. You can easily see a handful of people just by biking, skiing, or even running around. You can stop for a moment and just observe the world around you and you will find tens, and even hundreds of other players experiencing the same game you are. Some of the “players” you will find are just ghosts of other players, while some of them are actually live who’s in the same session as you are.

I should mention that I played this game on a PS4 Pro and I’ve experienced delayed environmental rendering and the loading time can be slow at times, but all of them are very tolerable and do not affect the events or the overall experience in any drastic way. I expect the performance is much more stable in new-gen consoles or high-end PCs.

The game’s “campaign”, if I can even call it that, is really nothing to write home about. The NPCs in the game are just there to guide your progression. If you’re the type of player who expects a decent campaign, even in massive multiplayer titles, you’ll find none of it here. While playing the game, though, I never felt like I needed it. Would it have been nice to have a story I can follow on? Of course. Is the game enjoyable enough without it? Without question.

Those who are wary of microtransactions in games should know that, yes, Riders Republic does have a store where players can spend real money. However, it is purely for cosmetics. Riders Republic is not pay-to-win. However you feel about microtransactions, keep in mind that it does not affect performance and skill in any way, so you can breathe easily and focus on enjoyment.

There’s a sense of vibrance and energy in Riders Republic that makes me feel very alive whenever I am playing it. Whether I’m engaged in an event or just casually roaming around in the game’s stupidly massive world, I know I am having fun, that’s what’s most important in a game like this. Gameplay-wise, this game is phenomenal. The events are intense and enjoyable and the exploration makes everything in between races and challenges equally entertaining. The world of Riders Republic feels very alive, and so am I as I am playing it. 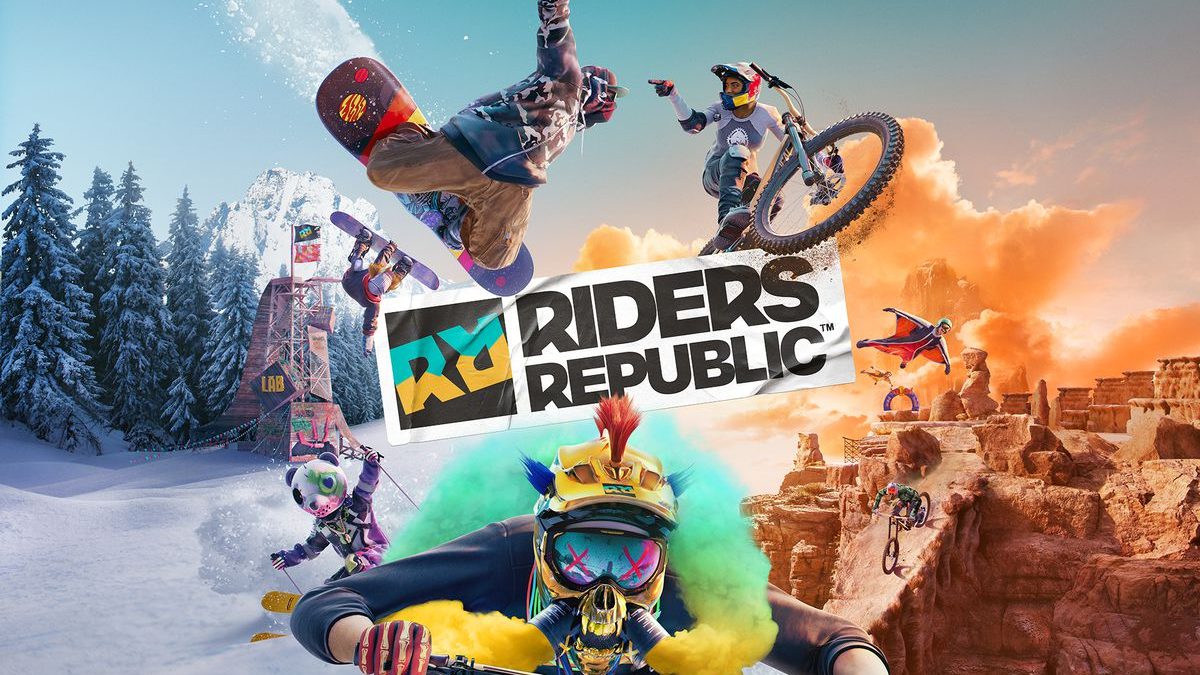 Riders Republic – Review
Score Definition
When the issues of a game are rolled and stomped by its greatness, then it’s something to invest on if you have some spare.
Pros
The gameplay is intense and enjoyable enough without being unnecessarily insane.
It's central theme is having fun, and you'll have no shortage of that while playing the game.
Exploration can be just as fun and beautiful as the events and races themselves.
The events are well-crafted.
The game doesn't take itself too seriously, and it's better for that fact.
The world is very alive and vibrant.
Cons
The camera can be unintuitive during events.
Some multi-sport events can feature sports that haven't been introduced to you yet.
Performance on the PS4 Pro can be janky, at times.
8.5
Great