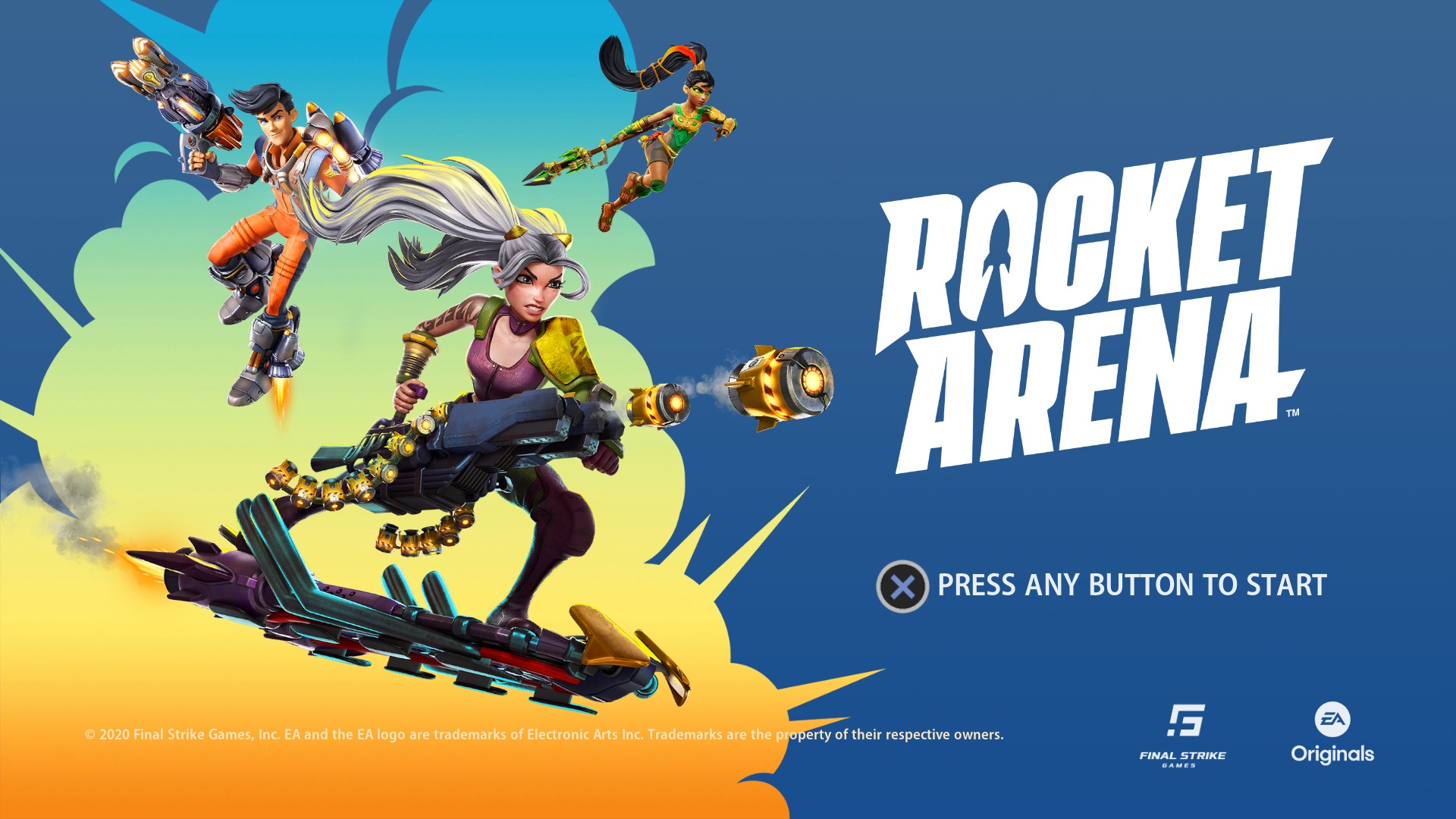 Rockets, explosions, and mayhem. That’s what Rocket Arena is all about. A game that’s all about rockets and the many destructive ways it can be used. Is it worth buying or is it better left on the shelves to collect dust? Let’s find out.

Rocket Arena is a 3v3 multiplayer game where you select from a wide variety of characters who uses their own unique rockets. It is a fast-paced, explosion plenty and mayhem worthy battles that will surely make any party nights enjoyable.

Booting the game for the first time takes you to a tutorial that teaches you the basic mechanics of the game. You can also opt not to do the tutorial and start tearing up the skies with rockets in various game modes. But before you do get to play the other game modes, you will have to play one game of RocketBot Attack.

RocketBot Attack is the mandatory game mode that you need to play before you get to unlock the other game modes. This game mode is a 3 player co-op mode where you try to destroy a set amount of RocketBots to win the game. You can be knocked out as many times as you can as long as one teammate still has a badge. Each team member gets 3 badges. Once this runs out or if the timer runs out before you get all the RocketBots, then you lose the game. This is basically the game’s Practice Mode as you can go choose any of the characters and still gain experience in the process.

If you’d rather want to practice alone, there is also a dedicated Practice Mode where you can not worry about any timers or losing a match. You just won’t gain experience towards leveling up your character.

Speaking of experience points, each character in the game has their own experience bar that you need to progress with, in order to get skins for the character. You will also gain experience points towards leveling up your artifacts. Each character has their own sets of artifacts. And you can get one randomly just by playing the game. You can equip up to three artifacts per character. And each artifact can help you gain an advantage in the game. The advantage ranges from perks like increasing your ground movement speed or increase your damage dealt.

The objective in most of the game modes in this game is to knockout your opponents out of the arena. The arenas come in all sizes ranging from the tighter space of Apogee Acres to the vast open space of Frostwind Grove.

Playing in the casual 3v3 social mode puts you in random maps. So you will have to think about which character to use in which map. Of course, the game does give you the freedom to choose whoever character you prefer; but if you’d want to win the match, you will have to choose strategically.

What I’m trying to say is that there are definitely some characters who can do better on a certain map or a certain game mode. With 10 maps currently available and 5 game modes to choose from, the possibilities are endless when choosing a team composition.

Let’s go over the game modes really quickly. The first game mode is called Knockout. Which basically means you need to knock out the opposing team to win the game. You will have to knockout 20 opponents to win this game mode. This game mode can either go quick or long. Which depends on who you get teamed up with and how efficient you are at knocking out opponents.

The next game mode that can come up is Rocketball. In this game mode, a ball gets dropped in the middle of arena. And you and the other team needs to race out to get control of the ball, and place the ball in the opponent’s base to score. This is probably one of the most enjoyable game modes because it’s not so much as being able to knock out opponents. It’s more about having the skill to toss out that ball and ensuring that you score the point. There are some characters that are very well suited for this game mode because of their traversability.

The next game mode that can randomly come up in social play is Mega Rocket. This game mode is similar to games where you have to defend an area. A mega rocket randomly drops in the arena and you have to stay in its area until you capture it. Once captured, your team scores the point. This is another game mode where it can go quick or longer depending on which characters your playing it. Characters like Blastbeard whose ultimate is to knockback enemies will be good here.

The next game mode that can randomly show up is Treasure Hunt. In this game mode, it alternates between two phases in the game. First phase is the treasure chest round where you or one of your teammates hold on to a treasure chest that appears in the middle of the arena. Holding on to it for a set amount of time will gain you the 25 coins. Once this phase is over it then switches over to a coin collecting round.

In this phase, you have to collect coins all over the arena in a set amount of time. This continues to alternate until one team gets 250 coins in total or the timer runs out. The team with the most coins at the end of the game wins the match. The teammate who holds the chest has to be mindful though as their abilities get locked. And they won’t be able to help out in fighting off your opponents.

The graphics in this game are very colorful and animated. It almost feels like being in a comic book. The animation and art style are very cartoony and the color palettes are just a rainbow of explosions. The game does give you a warning that it can trigger epileptic seizures to those that can’t handle too much going on in their screen so be warned.

The audio really matches its art style and gameplay. It seems to borrow heavily from tunes in The Sims or Fortnite but it does have its own unique music. It really adds to the adrenaline rush and mayhem of the game.

Like what I said at the beginning of this review, this is truly a fun game that’s best played during party nights. But I don’t really see it as something that I would play competitively for when there are so many free games out there that have already made a name for themselves.

I don’t think this game is worth its price tag because there is still a Battle Pass that people can purchase should they be willing to support the game. However, if the price tag was probably lower, this game can be worth every penny you can pay for. It’s a game that doesn’t take too much of your time. And it’s a game that you will surely have a blast playing.

Overall, Rocket Arena is a game that is quick, fun, and very entertaining for the few minutes that you play it. A game that I believe is best played with friends, however, can you really convince five other people to purchase this game and play it with you? I guess the only hope for that is if the game goes on sale. I do believe the game will improve further down the line when it gains more popularity but as of now, I would recommend holding off on buying it.

Rocket Arena – Review
Score Definition
You better have to choose if it’s worth spending your spare cash, because it might not be the game for you and it might be for others.
Pros
Rockets, rockets everywhere
A very fun party game for friends
Quick matches that can be fun
Cons
Can get really boring, really fast if you're playing solo
You will tend to stick with one character
Servers are region locked
6.5
Justified