Enter the most powerful adversaries of Gundams, the Mobile Armors in SD Gundam Battle Alliance!!! 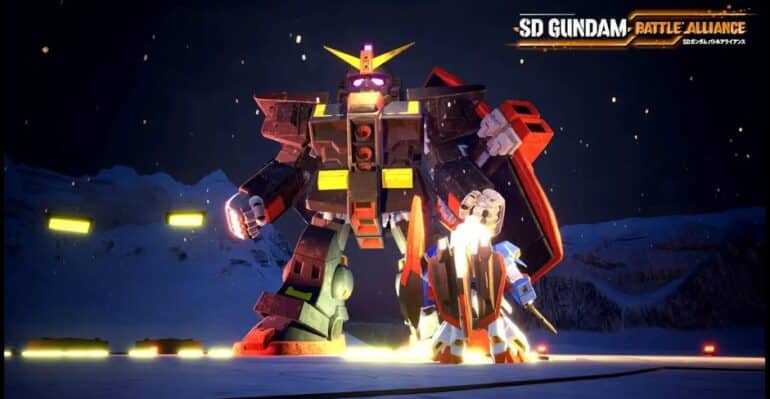 SD Gundam Battle Alliance is nearing its release date and what better way to push the game to its limit than with original mobile armor bosses that players will face once the game comes out?

Like Gundam Latreia, this mobile armor is an anomaly that does not appear in any of the Gundam timelines meaning that this machine that does not exist in any history. A mobile armor that resembles a tank. It specializes in long-range and heavy artilleries that are hard to get through. Though it may look slow, it’s actually really fast as it can do rush attacks so players must proceed with caution.

Like Gundam Latreia, this mobile armor is an anomaly that does not appear in any of the Gundam timelines meaning that this machine that does not exist in any history. An aircraft-type mobile armor that partners with Plug-in P. Unlike its partner, it specializes more in close-range combat. with its extendable claw arms and beam sabers, and shooting with the micro missile pods on its shoulders. Transformation is possible, and high-speed movement is possible by becoming an aircraft form. Anti-beam coating has been applied to reduce air resistance when in aircraft form, so it has no flaws in terms of defense.

Confused missions are missions in which “fragments of different historical data” are mixed in with the true missions that should have been repaired. Usually, they arrive at random depending on the outcome of completed missions. In order to voluntarily challenge the mission that appears once, you need a revision key that can be obtained in the game.

The Sudden Arrival of Psycho Gundam

During the battle against LOGOS, Shin Asuka and his allies appear in Berlin as the Destroy Gundam continues its invasion, destroying the city as it goes. Freedom Gundam and the Archangel block their way but are still overwhelmed. With hard effort and much sacrifice, they manage to defeat LOGOS prized unit. That is what really happened in that part of Gundam Seed Destiny’s history. However, a time anomaly has occurred. Out of nowhere, PSYCHO Gundam appears and pushes away any enemy approaching it using its I-FIELD. What has led to this historic moment and what causal factor led to its arrival.

Some of the mobile suit’s attacks and actions have a cancellation point, so you can cancel the action and connect it to another action. Determine your own combo by making full use of various attack methods such as sub attack, rotation attack, launch attack, and more.

Bio: Due to an unexpected event, the boy was picked up by AEUG and became a pilot of the ZZ Gundam. He gets caught up in the selfishness of an adult, loses his precious sister and friends, and finds a reason to fight against a war created by human self-interest.

Bio: As part of the Earth Federation Forces, he serves as the captain of the Federation Space Force’s independent mobile fleet Londo Bell Squadron. Compared to the time of the One Year War, he has grown remarkably, has acquired the composure of an adult, and has grown not only as a soldier but also as a human being.

Bio: A warmonger who acts for the purpose of making war. His lower body was burned in the Great War just before the establishment of the Earth Federation, but he was given regenerative treatment by Ribbons and returned to the battlefield again under Ribbons.

Bio: The leader of the mercenary unit Serpent Tail. He was entrusted with a request to dispose of the Astray left in the colony Heliopolis, but after being betrayed by the client, he fought together with Loewe who was there, and boarded the Astray Blue Frame.

bio: She is the head of the Sahak family, one of the five great clans of Orb. She regarded the idea of the Orb representative chief Uzumi Nara Athha as an ambiguous way of thinking that could not protect the country and stuck to her own beliefs.