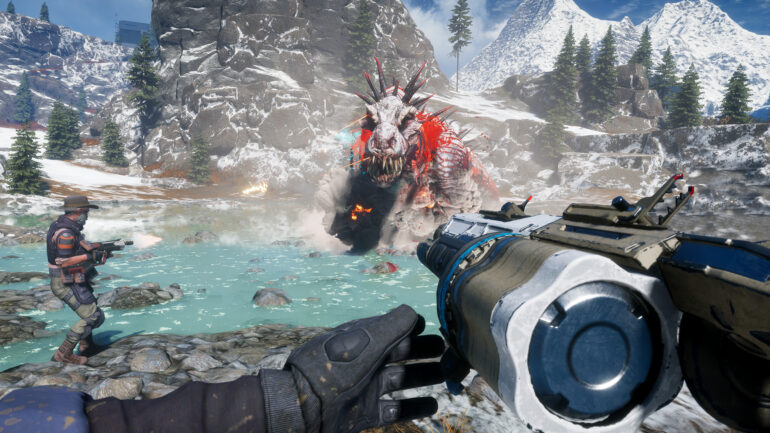 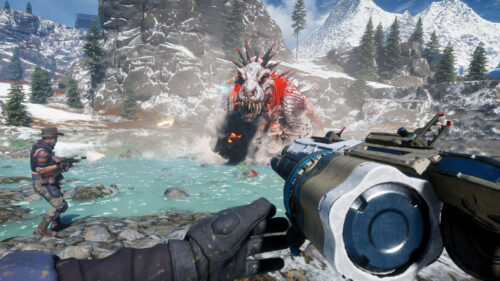 Dinosaurs. Who doesn’t love them? These creatures walk the Earth once again but rather weirdly as these massive reptiles face extinction for the second time. This isn’t your Dino Crisis or Jurassic Park game, it embodies the very core of a classic first-person shooter title, Turok. These vicious creatures won’t stop trying to kill you. Second Extinction does wonders in the visual department, however, it runs dry after multiple playthroughs once you’ve technically beaten all missions.

Second Instinction offers its players the option to choose the kind of character they like. The game has about 4 characters with distinct abilities that can match the player’s playstyle. For example, you have Jurgen, the old fool who’s deadly with a sniper rifle. He can be difficult to spot by aggressive dinosaurs when crouching, making him a character that’s built for long-range gun support. You also have Rosy, the badass woman who mows down dinos with her minigun. She’s useful when her special ability is activated, providing health regen and a defensive boost for a short amount of time to survive enemy hordes.

With the characters’ unique traits, you will end up experimenting with different sets of characters in a 3-man squad. It’s a nice way for you to squad up with your friends, go through each of the characters’ abilities to see what’s the right mix. Which is probably why this game works so well when you play with your friends than with randoms. You get to obviously speak to them over Discord, make strategic decisions before triggering an event that would cause dinos to attack in waves. The level of satisfaction you get when everything goes according to plan is really gratifying. I love it.

When it comes to the characters, both Rosy and Jurgen are my favorites based on abilities. But they somewhat disappointingly lack the personality. The game does a poor job of making you invested in the characters as it focuses itself more on its gunplay mechanics. I think it would’ve been better if they offered some kind of character customization with different faces, an option to change the gender, rather than pre-made characters with no backstory.

But that doesn’t mean Second Extinction isn’t fun. The shooting feels great, you have assault rifles, shotguns, a minigun, even a 50 caliber sniper rifle. The game offers fast-paced shooting gameplay as you and other players have to constantly be on the move. Taking down a Rex is one of the best moments you get, but it gets old pretty fast though. Nevertheless, it’s a game full of action as you sweep waves of enemy mutant raptors and triceratops and eventually overwhelm your team if you don’t work together.

Furthermore, you’re able to level up your profile to unlock specific features in the game like accepting contracts and being able to upgrade your weaponry and new weapons. Getting the materials for upgrades is a total grind. As you can’t get the things you need after the game as a reward, rather, you have to kill dinos, get their “dino-parts” and use them to improve your weapons. Yes, if you aren’t mindful of your surroundings after shooting down a dino, then you wouldn’t be able to get them. I believe this is a way for the players to get back into the game if they’re eager enough to progress, but it slowly becomes dragging. Even doing optional missions doesn’t offer much after the first time you complete, and there’s no sense of achievement either.

When you want to explore, there are optional objectives scattered across the regions. It’s not a linear experience, it’s not an open-world, but it’s big enough for you and your team to venture before heading directly to the main mission. However, doing these optional questions are a chore than giving you some meaningful progress like additional lore, or even a short narrative. It simply rewards you points and that’s that. It lacks the substance, and I would rather skip them all and finish the main objectives than waste my time going through every single one of them.

It fails to provide something meaningful when you explore the regions. They’re only simply full of dino threats, your squad is the only living beings there… the world’s pretty much extinct.

Since Second Extinction is still in early access, there’s a lot of potentials for the game to grow. New content will come out in the next couple of months until it gets out of early access. Even a single-player campaign might be a good addition to give us a better understanding of its world. But I would like to commend System Reaction for the level of optimization this game has! The overall polish is so great that I barely notice any performance hiccups. I hope when they add more content that it wouldn’t affect the current state of the game right now in terms of stability.

Second Extinction is fun to play with friends, you get to charge and eliminate mutated dinos. But it becomes stale so quickly that the main reason why people play it in the first place is because of the dinosaurs and obviously fighting against a Rex. There’s still a long way for System Reaction to make the game a compelling one by improving the side-missions, but right now, I believe it’s best to buy the game after a few months with more content.