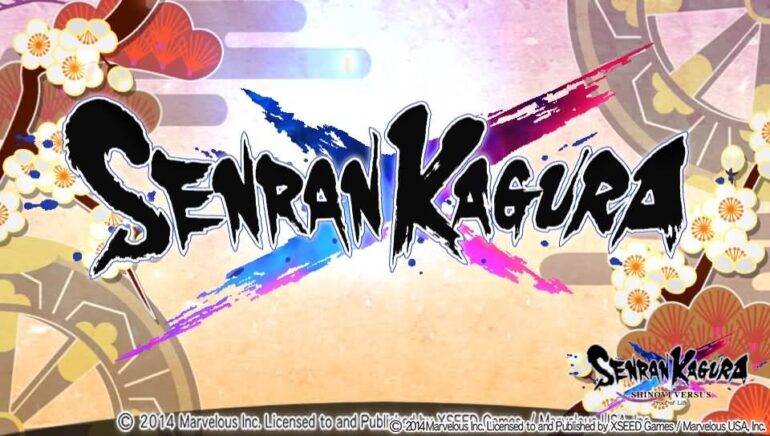 Ninja girls and breasts. Those are the two most prominent things you will be bombarded with in Senran Kagura: Shinovi Versus. Tamsoft‘s latest venture into the PlayStation Vita brings us this fast paced, action packed ninja brawler. Does the game deliver more than just gratuitous chest? We’ll see at the end of this review.

First off, let’s start with a disclaimer warning. If lewd content and sexually suggestive themes make you uncomfortable, this game might not be for you. This also might not be the kind of game you might want to play in public if you don’t want to risk judging gazes. There is a LOT of fanservice-y content in this game. Almost all of the game’s twenty playable characters divided into four distinct ninja schools feature anatomically impressive breasts. Some of them reach sizes that seem rather age inappropriate and comical, but it surprisingly doesn’t really distract from the core gameplay.

Moving on from the game’s most well advertised aesthetic asset, the game’s overall aesthetics give a very colorful and energetic scheme which matches well with the fast paced action that’s going on. Every single one of the game’s playable characters all look unique and carry their own themes. Complementing each character’s unique feel are the various special techniques they can pull off in game which are all flashy and look spectacular. The game makes good use of the vita’s processing power in rendering large numbers of enemies on screen at the same time with barely a dip in the frame rate. The game features a soundtrack that’s a mix of traditional Japanese music and rock which works great for the modern ninja theme of the game. The game’s soundtrack is pretty solid whether it’s for lighthearted slice of life moments or pitched ninja duels to the death.

Now onto the meat of the game, the core gameplay of Senran Kagura revolves around fast paced combat between either a large hoard of enemy ninjas, one or more boss battles, or a combination of both. The game’s combat system is pretty simple in that there’s a button for heavy attack, light attack, jump, and dash. Despite the simple control scheme, players aren’t just limited to mindless button smashing like in other hoard brawlers like dynasty warriors. Some characters deal the most damage by charging up their attacks, others benefit from cancelling their projectile attacks with a dash, others get by with wide sweeping attacks. Every character in the game plays differently and this adds some much appreciated variety in the game.

The players start a round with their ninja girl of choice in her school uniform which can only utilize their basic attacks. At any point in the game, they can choose to transform into their much more powerful ninja mode which has access to their full arsenal of ninja techniques.. Transformation takes up a ninja scroll which can be earned by dealing damage, or picked up on the battlefield, and completely refills the player’s life bar. This can be used when in a pinch to save a potentially losing battle. Besides their normal ninja transformations, the girls can also opt to transform into their frantic mode. In frantic mode, the player’s character is reduced to her underwear and deal massive amounts of damage at the cost of drastically reducing defenses. The more damage you deal to another character, the more and more their clothes get torn up. A nice touch here is that the less clothes they have on, the more damage they take. Finishing off an enemy who’s reduced to their underwear with your character’s ultimate technique ends up completely stripping your enemy naked.

All these gameplay features make combat exciting, the choice and timing of ninja transformations add flair and strategic depth to combat. Do you transform on the get-go and overwhelm your enemies with your ninja arts or do you fight like a true anime character and save your ultimate techniques for when the situation is dire? The decision is all yours and it helps make every battle a spectacle.

The game’s plot really isn’t all that deep. The game lets you play as one of the four present ninja schools and experience the story from their perspectives. Each different school’s philosophy is reflected in how their respective plots play out and guarantees a different experience with each play through. Besides each school’s main plot, there is also a special campaign for each individual ninja girl which tackles their own personal storylines. These missions are filled with funny slice of life scenes of cute girls doing cute things and help flesh each ninja out some more as well as reward players with more CG still shots that they can purchase off the game’s shop and use as wallpapers.

Speaking of shop, the game features an in-game store where players can buy things ranging from clothes and accessories for customizing, wallpapers, voice clips, and even lingerie. Yes, the game even has a dedicated lingerie lottery for those of you who really want to “catch em’ all”. There’s an option to pay with in game currency and a special option to purchase with real money, but with the amount of gold you’ll be earning by completing the game’s various missions, the real money option seems almost unneeded. One thing that the game’s customization could need improvement on are the number of clothing selections. There really isn’t that much to choose from, especially for hair options. A lot of the game’s other outfits are sold as DLC in the playstation market, which seems like a cheap move to squeeze out more money from the player.

To sum it all up, Senran Kagura: Shinovi Versus is a fun and enjoyable game. Behind the ambitiously oversexualized fanservice is nice and solid gameplay. The combat is deep, but beginner friendly. It’s easy to learn and yet can still remain challenging, perfect for people looking for action games to sink several hours into. While the story isn’t all that amazing, players will get enamored with the game’s cute cast and their wacky antics. The multiple story missions and side missions give the game considerable play time, and the inclusion of local and online multiplayer add some even more replay value.

If you’re hungry for some lightning fast ninja action and aren’t fazed by young and busty highschool girls getting their clothes torn off, then this game is definitely a must have for your collection.