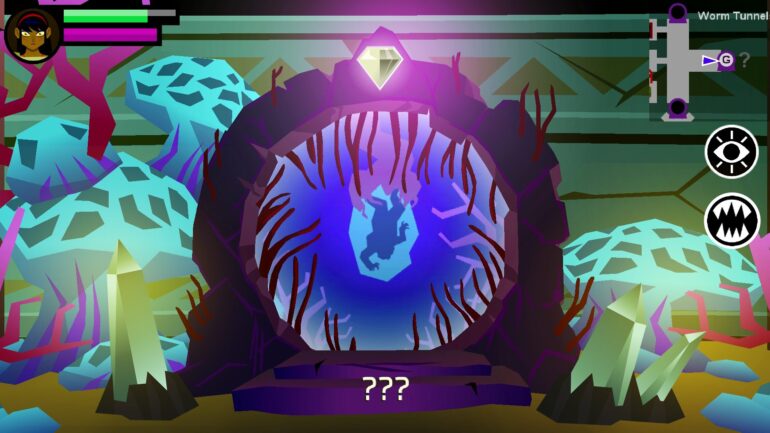 From DrinkBox Studios, creators of Guacamelee come Severed, a unique first person slashfest for the PlayStation Vita. Severed has you in the shoes of a one-armed girl named sasha who has to traverse dungeon after dungeon to save her family.

At first glance, Severed shares similar art direction with Guacamelee with its vibrant colors and poster cutout-like aesthetics. While Guacamelee was predominantly filled with warm colors, Severed‘s aesthetics carry darker shades to help evoke the dark and mysterious tone of the game. That said, Severed is a dark game and true to the name, you will be doing a lot of cutting.

Most of the game is spent traversing through the game’s dungeons in the first person much like traditional dungeon crawlers like Etrian Odyssey and Shin Megami Tensei. Where the game differs is when combat is initiated. Unlike traditional dungeon crawlers where combat is done in a turn based manner, Severed has you do a lot of real time cutting by swiping at the touch screen.

Those familiar with Fruit Ninja will find themselves at home with the game’s combat system, though the game introduces a lot of tactical twists to keep players from just mindlessly swiping at their screen like they’re going through tinder hits. The game rewards players who hit accurately and time their strikes right. Every successful swing builds up their meter of focus, and every time their attacks get blocked or they take a hit they lose focus. Once the focus bar is filled up, players have a brief window of time upon killing an enemy called “severed mode” where they have a few seconds to sever enemy limbs to collect and use as power ups.

Every enemy is uniquely designed so the player has to pay close attention to each enemy’s guard and attack pattern. The game does a great job at designing the enemies in a way that players can intuitively figure out how to properly find their weak spots without the game handholding you through it or blatantly pointing it out for you. On the defensive side of combat, the game lets you parry enemy attacks by swiping against their attack the moment their strike flashes red. There’s an indicator at bottom of the enemy which fills up as an enemy readies their attack, which is vital in timing your parries. All these combine into an fast paced intuitive combat system that will have you at your wits as you skillfully hack your way through the monsters that stand between you and your enemy.

At first, the combat seems simple enough as you’re often faced with just one enemy, but later on the game proceeds to lump you against multiple foes at the same time which forces you to multitask between various foes as you switch through which one you are currently fighting with the touchscreen or the left analog stick. The further you go into the game, the more the combat resembles dark souls in that it demands absolute precision, timing, and memorization of enemy attack patterns to survive.

Overall, Severed is a unique experience. It manages to combine two different genres seamlessly to provide a dungeon crawling hack and slash adventure a class of its own. It’s one of the very few games in the market that make full use of the PS Vita’s touch screen to the point where it’s almost completely reliant on it. That said, it does leave a lot of the Vita’s controls underutilized, but that doesn’t detract much from the gameplay experience. The game has a nice learning curve, though some gamers might find it a bit steep in later parts of the game as the number of enemies start piling up. As a dungeon crawler, the game also runs into the problem of multiple repetitive battles, after all, one can only swipe at the screen for so long before tiring.

In the end, is Severed a game you should pick up? If you’re a fan of dungeon crawlers and want a unique twist to the combat system, then yes. If you’re new to the genre but aren’t too shabby with your fingers, then yes. Severed is a beautiful game with a finger swiping control scheme that actually makes you use your head while demanding fast reflexes.

Severed offers easy to learn but hard to master swipe based gameplay that will demand your focus as you trudge through the games multiple dungeons. It’s a fun game, but could use more depth as it doesn’t have much outside of combat.

It’s a fun, simple, good looking game with a surprisingly deep combat system. That said, there isn’t much more to the game besides the occasional dungeon puzzles so if you’re hungry for more, this game might not be for you. If you have the patience for repeated battles while dungeon crawling, then it wouldn’t be much of a surprise to find yourself burning hours just swiping at your screen.