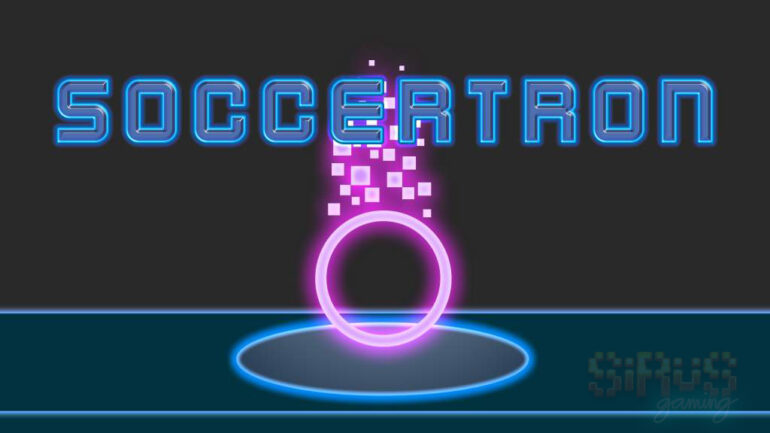 This is not a video game based from TRON. It’s a totally different kind of sports game where you’ll get your butt kicked by its AI.

There’s nothing much to say about the game aside from its variety of game types. Soccertron’s 5 game modes (Soccertron, Basketron, Valleytron, Shrinkotron, Pittron) are almost the same in terms of gameplay that makes Soccertron have that repetitive atmosphere. Along with the almost similar gameplay experience with the game modes, Soccerton includes a very challenging player-like A.I that makes the game interesting. It can be frustrating how it can take about a couple of retries before you can actually defeat your epic opponent. But that frustration also comes with that first and last feel of accomplishment when finally defeating your computer rival.

Soccertron and Basketron are the game types that have almost identical gameplay which makes both of the game modes repetitive. Soccertron feels more like Basketron in a way where the player needs to shoot the ball on a ventilation-like hole to score. On the other hand, Shrinkotron’s game style of hitting the opponent’s wall sounds more like what Soccetron’s game style should have been.

The enjoyable game mode that I played was Volleytron. Similar to Volleyball, the timing and control of the ball are the key to defeating your opponent. With the great challenge of controlling the ball, the opening border will also become randomly smaller which makes it hard to throw the ball to the other side.

The most off game mode in Soccertron is Pittron. Almost identical to Volleytron, the goal of Pittron is to destroy the platforms to force your opponent to fall while defending your own floor using the ball.

The repetitive gameplay is overlooked by the game’s multiplayer fortunately. It allows up to 4 players in total for team plays which makes the game fun to play with friends on a couch. Unfortunately, Soccertron doesn’t have any online mode to make the game experience great. But according to the developer, online mode is planned.

A big factor of the game that made it disappointing are the controls, specifically for the keyboard. The control key mapping is set horribly confusing to X for kicking, C for jumping, Shift for pushing/dashing, and the arrow keys for moving. I didn’t have any choice but to use my generic gamepad since the game doesn’t have an option to change their controls in Options.

Overall Soccertron is a decent sports game to play with friends. The neon colored stickman futuristic sports game is a fun title. Soccertron gives that hilarious enjoyable multiplayer experience despite the repetitive gameplay. Despite the bad control key mappings, repetitive gameplay, and lack of online support the game is still fun even against an A.I. Soccertron still has a lot to prove before it can be a great sports video game title in its genre.

This review is based off a review copy provided by David Erosa.