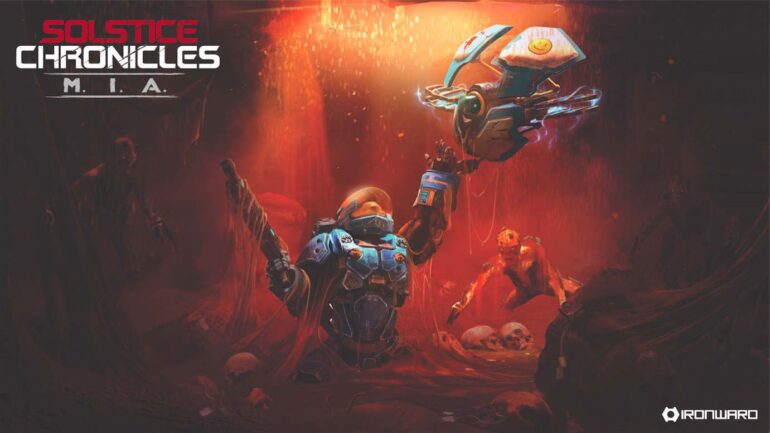 Twin-stick shooters are fun when they have interesting gameplay mechanics especially with friends. Usually, most of them appears to just have similar experiences with a slight variation with the story and some gameplay elements. I, however, am hard to please with this genre. Only a few good titles has impressed me so far and those games are Aliennation, Livelock and How To Survive.

Solstice Chronicles: MIA by indie developer Ironward does show promise as a twin-stick shooter title, but there are still sections in the game that can be improved on before its launch. We’ve been given a chance to test out the waters in this alpha-build of the game. Please do note that I don’t have any experience with their previous title, The Red Solstice. 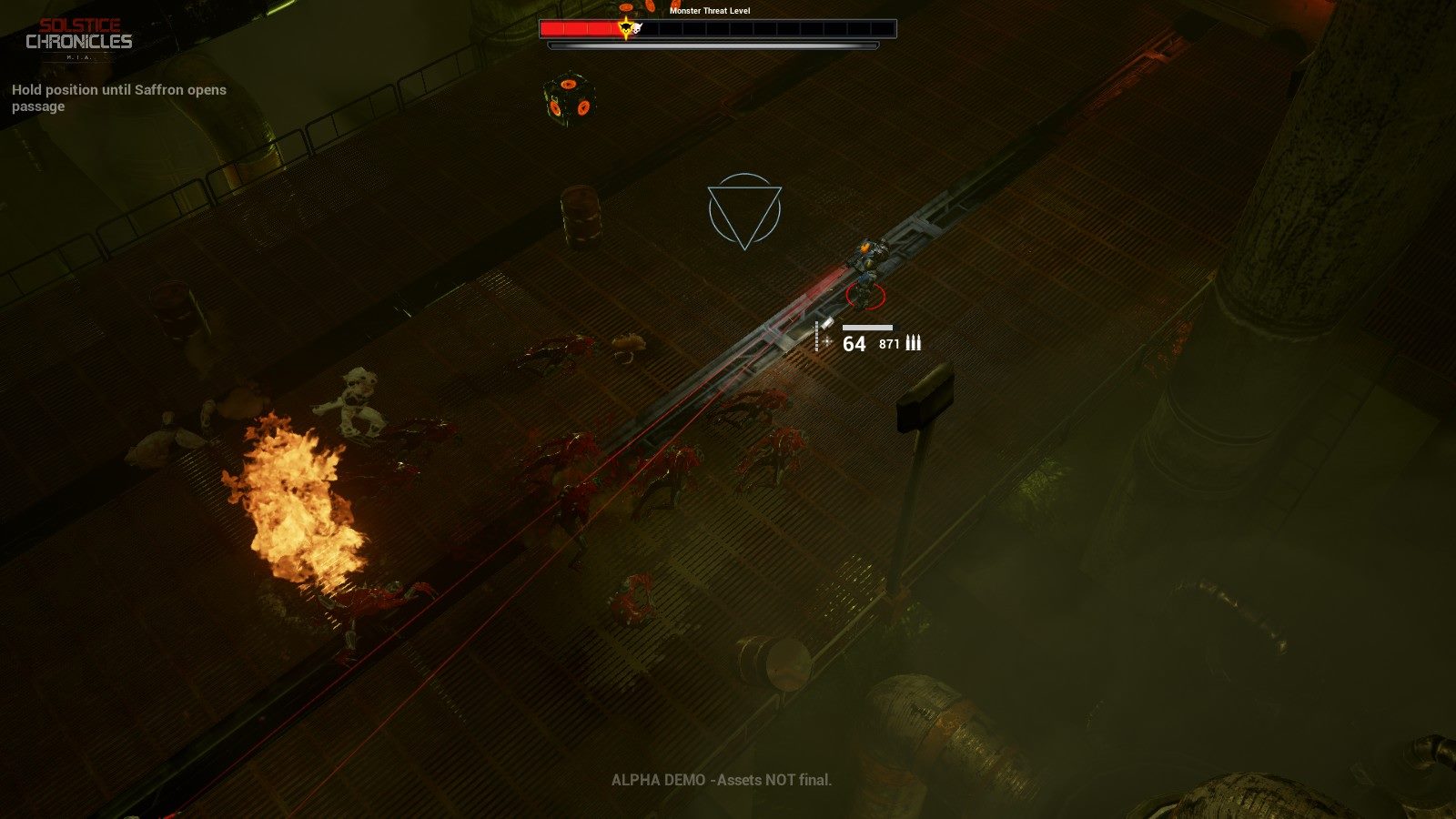 Platform Previewed: PC
This preview is based on the alpha-build provided by the developers/publisher.

Earth is in a horrible shape, humanity’s last hope is in Mars to continue life and their overall existence. However, there are things that lurks in the planet and it’s up for survivors to get through these deadly monsters. The plot might be another alien sci-fi horror, but there are things that lures me in to know more since there are only 3 levels in this alpha-build.

Solstice has interesting points that makes it unique from other twin-sticker games. You get to decide whether you run away from vicious killing mutants or control the threat level before proceeding. In most games, you fight off hordes of enemies until you kill them off, but in Solstice it’s different. The Threat Level, as what the game calls it to be, is an indicator whether or not if you’re in control of the current situation. If it goes beyond the gray bar, then you’re in hell. Monsters unlimitedly spawn, and the action is constant. I initially thought it was just on areas where I get to defend my drone when unlocking doors for a limited amount of time. 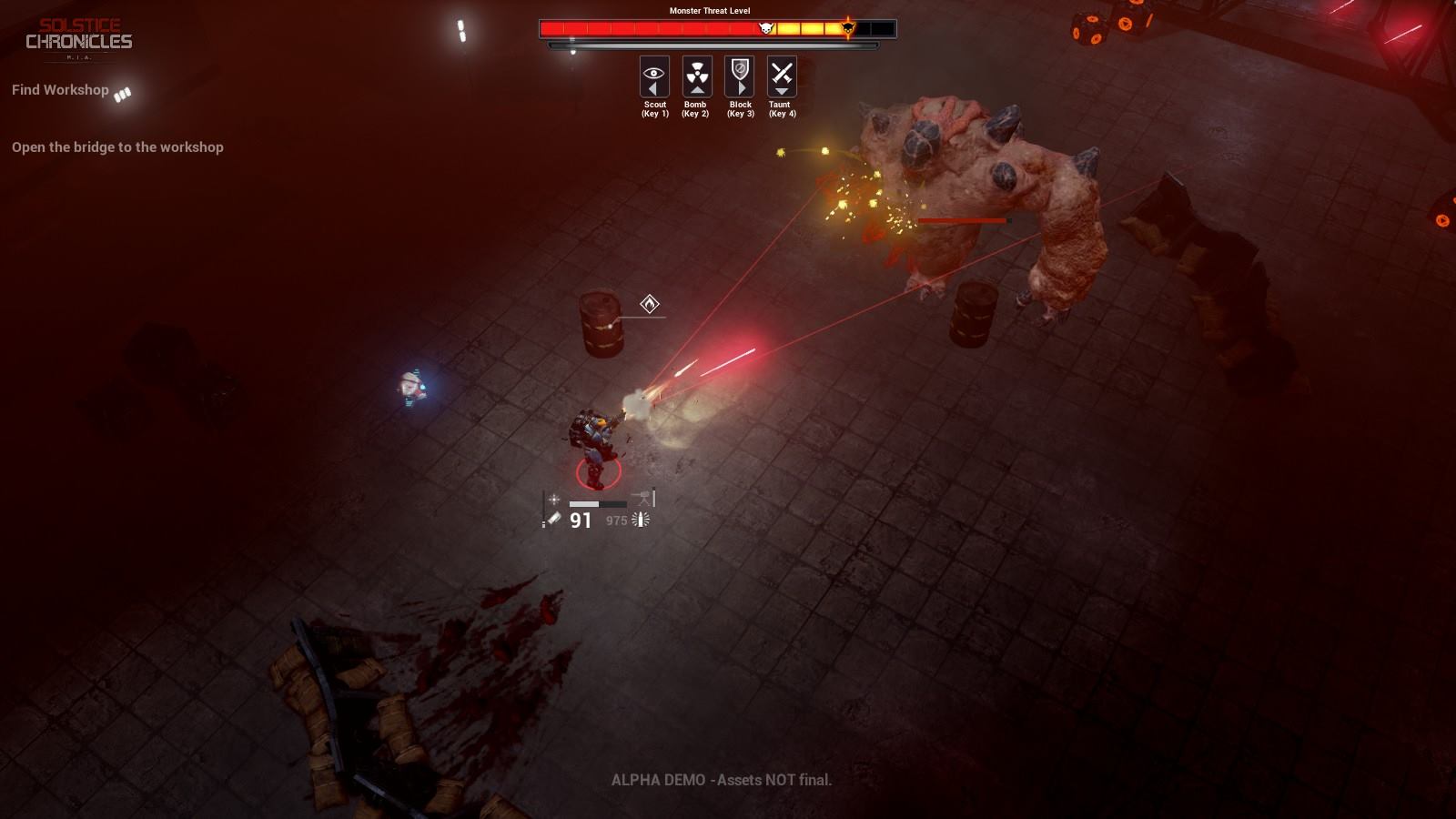 You also have a Drone companion that helps you out. It has feats that can also be useful in impossible situations. These abilities include Scout, Block, Taunt, and Bomb. It is scarce to find ammos in the field, and using the Drone’s Scout to get you what you need is advantageous – but it’s also a bit overpowered. You’re able to get weapons that can help you in fights that is deem to impossible to achieve. However, I find the lack of the Drone’s ability to fight back is a missing piece.

In this alpha build, I got to fight a boss. It’s insane especially when it spawns mutants out of the blue. And to get you what it feels like, you’re severely outnumbered and lose ammos quickly. You can survive with the slimmest chance you’ll ever get. That’s why I wish if the Drone had a weapon, it would have made it fair. The controls are also smooth when panning the right analog stick and overall responsive.
Co-op though is unavailable until launch, and this is a feature of the game that I think would make it enjoyable. Playing it solo feels lonely and you get easily outmatched by enemies. With co-op, you will surely get the nicest part of this game, you progress together and fight the horde of endless deadly monsters, and brainstorm to survive the impending massacre.

Solstice was able to slightly impress me with this demo. As what I’ve previously said, twin-stick shooters have a hard time impressing me, but this one makes it to the list of games I’m keen to play when it’s out.

Ironward also has an ongoing crowdfunding campaign on Fig.co for Solstice Chronicles: MIA.