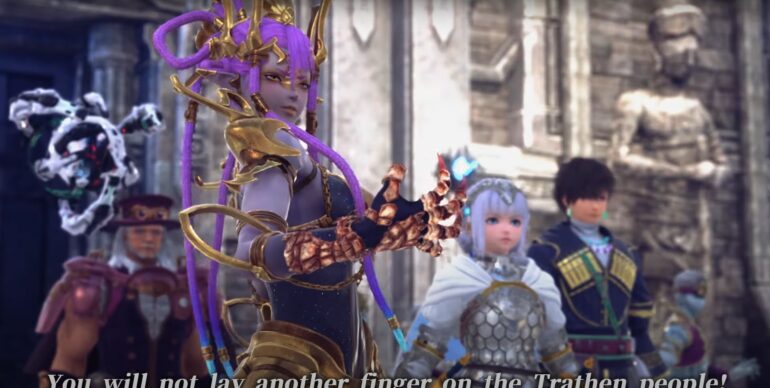 In today’s Star Ocean The Divine Force Mission Report #3, Square Enix talks about new information featuring the villains, a new character, skills, and actions. The two protagonists Laeticia and Raymond together with their party members are trying to save the kingdom of Aucerius from getting invaded by the Vey’l Empire. While the empire is the main big baddie, there is a group that the protagonists need to be wary of.

There is one faction that is quite dominant in the empire, the Vyrians. This group is going to be a thorn to the heroes’ party as they stumble upon them again and again throughout the game. They possess advanced technology and even then, they are trying to acquire another, the D.U.M.A., which the heroes are in possession. They want to use its powers for their sake and the empire. This faction includes Gaston Gaucier, Lola Jornaus, and Velanj Garfuul. They also call D.U.M.A. as the “eater of planets” for some reason.

During the journey of the hero party, they all meet with a race of beings that have been on Aster IV since time immemorial. The leader of this mysterious race is Malkya Trathen who becomes one of the party members. She leads the Trathen who are living on Nihlbeth, a certain location on the planet. Midas seems to know her and is quite intimate for some reason. She knows both Laeticia and Albaird since they were young.

Malkya is quite powerful with her unique melee style. Her race, the Trathen, have bodies that can shape-shift and are malleable, which allows her to whip her enemies with her limbs. Quite disturbing at first but it can dish out damage a lot. She can also learn a special move that could share her HP with allies, which is helpful in certain situations.

In Skills and Actions on Star Ocean The Divine Force, the characters can be customized extensively by gaining experience, earning SP, and using that to strengthen skills or learn new ones from the Skill Tree. Combat Skills lets players use various specialized attacks for each character. Active Skills allow players to gain the upper hand in battle. Lastly, Passive Skills will give players various supportive abilities that increase stats and more.

Leveled Up D.U.M.A. Has Bonuses

Training D.U.M.A. will give players an advantage in combat. To strengthen its skills, accumulate gems throughout the game that yield DP. It will give players a lot of bonuses if they have the patience to upgrade this mysterious ally.

Players can access powerful skills with the help of D.U.M.A. via Vatting. These are special techniques that are unique to each character and can deal a lot of damage to enemies if the Vatting gauge is full. It can deal tons of damage to one enemy or splash it all around to a whole mob of them.

D.U.M.A. can be detached from the player characters too to support the whole party. This is called the Estery Cage, which offers an increase in allies’ defenses, but it has a caveat. In Estery Cage mode, players are now able to use VA or Vatting in battle. The VA gauge will not even accumulate in this situation, so plan ahead.