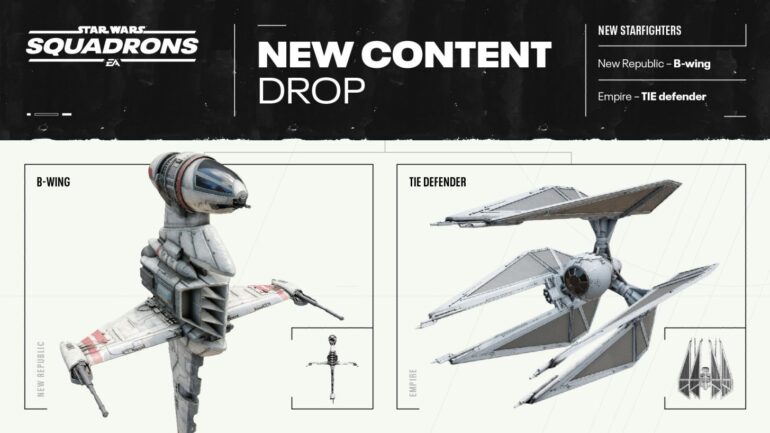 After telling everyone that Squadrons will not be getting any more content, it seems the warm reception has made them break their promise. It will be getting more post-launch content and this time around it will be in updates for November and December.

The first update will be coming this November 25 as part of Update 3.0 It will be introducing more additional fixes, balancing changes, and tuning. It will also introduce a new map and components to the game.

The new map is called Fostar Haven and it will be coming to multiplayer. This was one of the fan-favorite locations from the single-player story and have been requested for a long time. This is from the game’s first prologue mission. It will be added to Fleet Battles and the Dogfight mode.

This map has been updated to compliment with multiplayer and should fit well with the other six maps. Players will have to weave through the crowded dockyards or take the fight to open space.

There are four new components coming with the November update. For Fighters and Bombers, players will be able to use the Boost Extension Kit, which is used for giving the starfighter a full boost. It will then recharge over time and can be used again. This can change the pace of the battle in a new way by giving them the ability to change the tide of dogfights or getting out of engagements with flagships if use wisely.

The Interceptors and Fighters will get the Ion Rockets, which will be a good way of providing assistance when fighting against capital ships and flagships. It will be great for hit-and-run attacks that can decrease enemy shields. They move at half the speed of standard rockets, but they can be used at the same time as other components like their non-ion counterparts.

Bombers and Fighters is getting the Prototype Piercing Torpedoes, which offers these two ships with a new tactic for taking on capital ships. These torpedoes have the ability to bypass capital ship and flagship shields, which is the best way to strike enemy flagship subsystems before shield have been taken down.

The U-wing and TIE reaper get the Anti-Material Rocket Turret, which offers a good way to support allies when taking on enemy capital ships and flagships. It is best against flagship subsystems, capital ships, and turrets and other deployables from enemy support ships.

No specific date yet for the December update, but it will offer some good content. It will introduce more bug fixes and other changes as well.

Two new Starfighters will be introduced, which are the B-Wing and the TIE Defender. The prior will be categorized as a Bomber-class starfighter and the latter will be a Fighter, each being able to use the components relevant to their faction and class. They do have their own unique features like the B-Wing has a gyro-cockpit and swiveling wings while the TIE Defender has shields.

There will be custom matches in the upcoming update. This has been one of the many requests from the gaming community and now it will be introduced to the game in the coming update. It will allow one to five players per side across two teams to play on any of the seven maps in both Dogfight and Fleet Battles. Players can also choose some restrictions and modifiers for the match. A new custom matches server browser will be added that will allow players to search through private matches made by friends and a public version made by strangers.

Creative Director Ian Frazier has this to say:

From the earliest days, Squadrons has been a labor of love for our team, starting with just a handful of developers whose fond childhood memories of flying X-wings and TIE fighters in other games inspired us to create something new.

Ever since the launch of the game, it’s been an incredible joy to see players around the world climbing into the cockpits of their favorite starfighters, immersing themselves in fleet battles, building squadrons of their own throughout the community, and generally just sharing in the sheer love of Star Wars space combat that has fueled this project since its inception.

Your enthusiastic support for Squadrons has enabled us to expand upon it further in all the ways outlined above, and I couldn’t be more thrilled. I’m particularly excited about the Custom Matches feature because it will allow you, the community, to take more ownership of the game and create your own experiences for a long time to come.

Thank you for putting your faith in us, thank you for joining the Squadrons community, and thank you for helping us to make the game even better through all your feedback. And especially, a big thanks to those of you who supported us even before launch. It’s because of your backing that we were able to get a bit of a head start on concepting all this cool new stuff. You really did make a difference. Take care, and see you in the stars!

Star Wars: Squadrons is now available on PlayStation 4, Xbox One, and PC with PS VR compatibility.