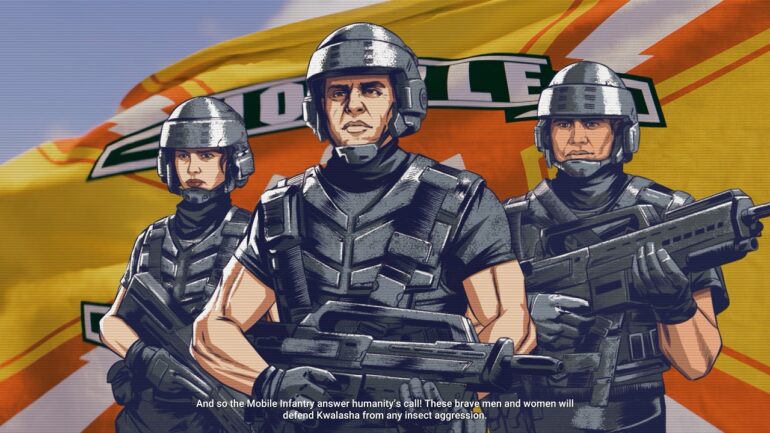 I’m doing my part… to review a game that relentlessly portrays militarism and fascism in a satirical fashion based on Robert A. Heinlein’s book, Starship Troopers. Adapted into a film in the early 1990s as a sci-fi action blockbuster, Starship Troopers, directed by Paul Verhoven and starring Casper van Dien, it made a cult following. Sequels were brought into the fray, and while both weren’t that good, its CGI-film adaptations, Invasion and Traitor of Mars, were.

Where Terran Command falls into the Paul Verhoven’s Starship Troopers’ timeline is confusing. At first, you get to play the prologue, taking part in the biggest invasion done by humanity in Klendathu, but after that, you’re sent to a backwater planet named Kwalasha to fend off the bugs that prevent the Federation’s mining operation, wherein one of the levels you get to deploy Powered Suit Troopers (featured in the CGI films) and Marauders (first revealed in the third live-action film). These are years away from the events of the first Starship Troopers movie, which, as a fan, is bewildering.

While I don’t have anything against the inconsistent timeline and the bland plot direction, Terran Command definitely shines on fan service. With all of the film’s arachnid designs from the Warrior Bug to the Scorpion Bugs, you’re in for a huge bug treat as you get to face and “kill them all” (in John Rico’s voice). You also get to hear famous quotes from the film like “come on, you apes” and “it’s a good day to die”.

I loved how Slitherine put a ton of effort into making this a game for the fans and took a lot of inspiration from the films.

Terran Command focuses its gameplay mechanics on better positioning and better angles, and a perfect mix of different units. Infantrymen are deployed as a squad, so you get to have a whole group of bug-kicking badasses from the Mobile Infantry. However, when another squad blocks their field of view or anything such as debris or a vehicle, they’re unable to fire at their targets. This is where Terrand Command gets fun as it also gets frustrating at the same time.

Micro-management becomes a crucial part. While it’s fun micro-managing units to have better positioning, unit pathing can be a big pain, especially when moving multiple squads at the same time, making me lose a few of them to the bugs. Nevertheless, when you get to position them timely, you get to drop a lot of dead bugs to the ground.

Squads also get promoted, enabling them to gain access to additional abilities that give you an outstanding advantage. One of my favorites is the Powered Suit Trooper’s passive, the Twin Rocket Pack. This gives the Powered Suit Trooper’s an additional attack with rocket launchers which makes them effective against Scorpion and Tanker Bugs, making them the most overpowered unit in Terrand Command above the Marauders.

Terran Command‘s 19 missions are focused more on defending against hordes of enemies and taking out hives. There are also some missions where you get to clear out caves and installations to reclaim the Federation’s outposts. While the mission objectives seem repetitive, the situations you fall into becomes unique in every mission. As you get to different areas, it calls for an immediate reaction whether or not you will have your units cramped up in a choke point which prevents any squads behind from firing at targets; or if you need to have more Rocket Troopers or Infantrymen.

It’s also worth noting that playing on Normal does seem to pack a decent amount of challenge, but the 4-star level difficulty that lowers your units’ damage to 0.75 becomes quite entertaining and enjoyable to play and makes the bugs particularly menacing.

Terran Command looks visually appealing. Slitherine took every bit of detail from all of the films, from Paul Verhoven’s Mobile Infantry uniforms to the CGI’s Powered Suit Troopers. Even the arachnids look amazing in stunning detail when running it on Maximum graphical settings in 4K. It’s also worth appreciating the level of audio the studio put in as they managed to capture all the weapon’s iconic sound effects, especially the E-Pulse rifles!

While the game’s overall performance is great, prior to my PC upgrade, I played the game on an AMD Ryzen 7 2600, 16GB DDR4 RAM, a 1TB HDD, and an AMD Radeon RX 6800 at High graphics settings in 4K, I stumbled on a few kinks, stutters and one-second freezes happened when using the units’ abilities; but all of those issues disappeared after I upgraded my CPU and RAM to an Intel Core i7-12700KF and 32GB of DDR4 RAM. The game still needs a few polishing.

Overall, Starship Troopers: Terran Command showcases a lot of love for the films. While the repetitive mission objectives can be a complete turn-off, this flaw is overshadowed by the unique scenarios, great level of detail, amazing audio design, and the ultimate fan service. It’s a solid Starship Troopers game. 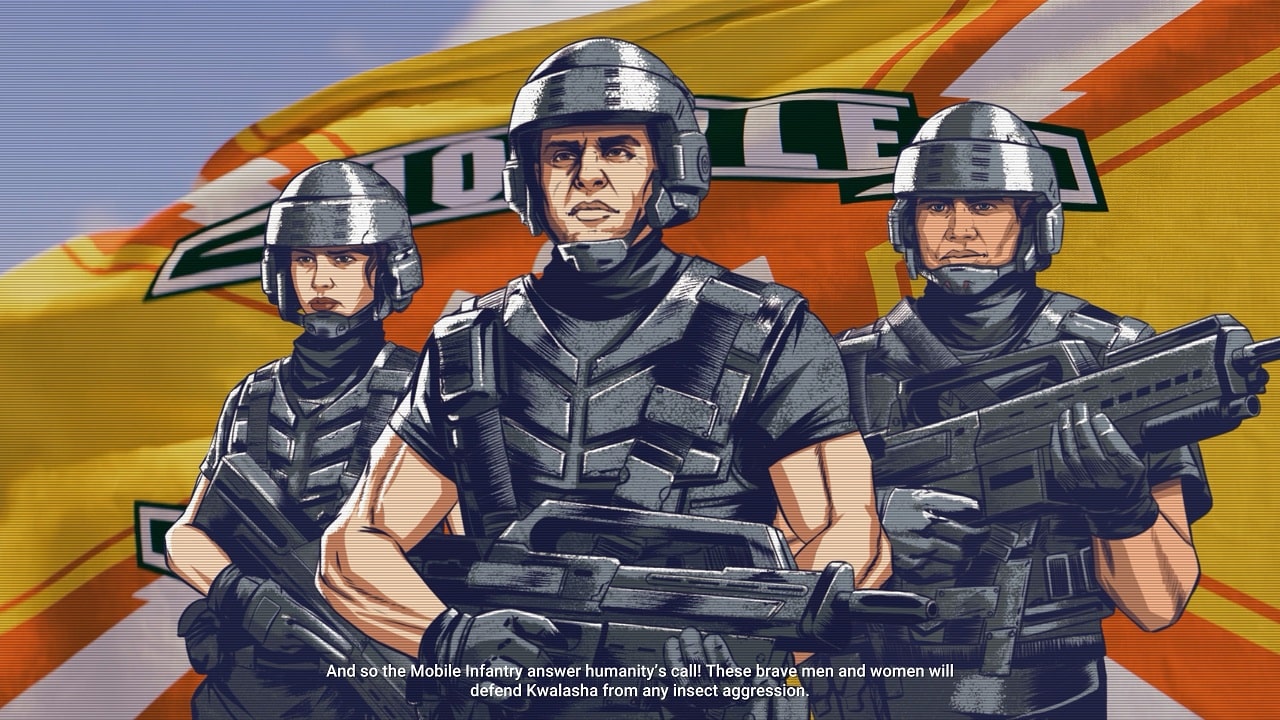 Starship Troopers Terran Command – Review
Score Definition
When the issues of a game are rolled and stomped by its greatness, then it’s something to invest on if you have some spare.
Pros
Visually Impressive
Ultimate Fan Service!
Decent Gameplay Mechanics
Swarm of Bugs
Cons
Repetitive Mission Objectives
Bland Plot Direction
8
Great