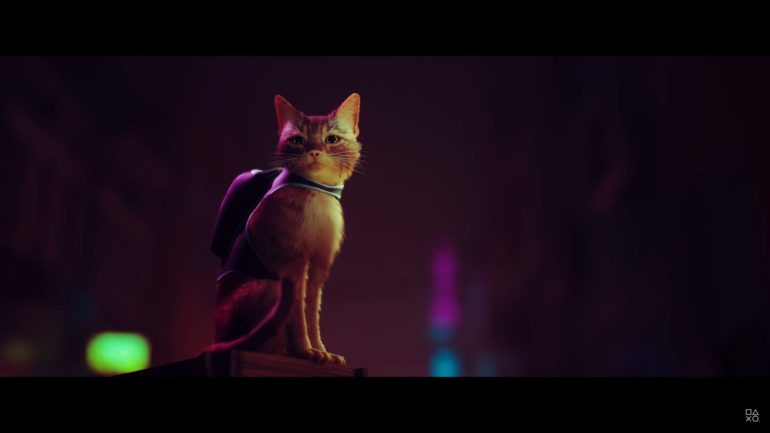 Stray is a cat adventure game like you’ve never seen before. BlueTwelve Studios’ first foray into the game takes us into a world of robots long forgotten through the eyes of a cat. Is Stray worth the wait and time to play it? Let’s find out.

Stray is a third-person adventure game where you take control of a cat and do all cats do best, Meowing. But seriously, this adorable protagonist is someone that you’d want to protect at all costs. The story’s premise is that the cat got separated from his family of cats as he went straight down into a hidden world of robots with feelings.

He befriends an AI robot named B-12 and together you traverse this world of secrets and mysteries as you try to get to the surface and reunite with the cat’s family. As all cats do, our protagonist cannot talk but can meow to his heart’s content. The mechanics they have built into this game are impressive enough that it really immerses you into what it feels like to be a cat and what the world looks like from their perspective.

The majority of the game is platforming style of gameplay. Jump here, jump there go through here to get to your next objective. You’d have to be as agile as a cat if you’d like to evade enemies and solve puzzles on all fours. Although most of the time, the traversing is obvious, there were instances where it was difficult to pinpoint where the cat is allowed to jump to.

It seems like all of the traversing points are fixed which makes mobility a little restricted for someone who is known to have all the freedom to be anywhere they want to go. There were a couple of times I felt this restriction but overall the world is yours to explore.

And again, the restriction grows further because the game is not an open-world game. The game is divided into chapters or areas and within each area, you do get to freely explore it. But once you progress through the story, you will forever be locked out from the previous area. The game does give you chapter selection once you’ve finished the game so that you can go back and collect any collectibles you may have missed.

Each chapter in the game provides new elements and interesting mechanics that will keep your engagement with the game. But the game is also flexible enough that you can find some time to just enjoy the beats and relax to take in all the beauty this world has to offer.

The colors are very vibrant and inviting. For a world that has been hidden in darkness for a long time, everything feels so alive and colorful in the towns. The dark tones in the abandoned areas really set the creepy mood and you just can feel the intensity of the situation when you are being chased by the monsters called Zurks.

There is no difficulty setting which means you can’t choose how challenging the game can be or how easy it can be. Though most of the challenge comes from how you can use the environment to get to your next objective.

I do like the variety of puzzle platforming this game has offered. There don’t seem to be the same kind of problems to solve. Keeping the game unique and full of surprises. It also keeps the game interesting. With that said though, once you have finished the game there isn’t really any incentive of playing it again, other than trying to collect things you may have missed the first time.

The cat being the protagonist, feels a little unrealistic in terms of nature. Cats are naturally feisty and will claw your eyes out if you’re not careful. However, the cat here doesn’t even fight with his claws. Instead he just timidly succumbs to his death without ever putting up a fight. Maybe he’s a kitten, I’m not sure but I was expecting more of a cat that can fight back rather than someone frail.

I finished the game in six hours but if you fully explore each chapter and get all collectibles as well as complete all side quests, it will probably take you 8-10 hours. But don’t let the short gameplay fool you. The story really packs a punch and lets you get invested in the lives of the characters.

This game will definitely take you on a roller coaster of emotions, from the thrills to the feels. I didn’t even think that would be possible with robots but for some reason, the game has humanized these robots so that you can actually feel for them and understand the emotions they are going through.

Overall, Stray has been quite an experience and I can say that it’s one of those games that you’d really want to play if you enjoy a good story and exploration. It’s a game for cat lovers, it’s a game for cyberpunk lovers. It’s a game for people who never stopped dreaming of getting out of a place they feel trapped in.

Stray – Review
Score Definition
When the issues of a game are rolled and stomped by its greatness, then it’s something to invest on if you have some spare.
Pros
Cats meowing
Colorful and lively environments
Interesting and thought provoking platforming puzzles
Relatable characters
A very short but memorable game
Cons
No replayability factor
Platforming mechanics is a little stiff and fixed
Cat is unrealistically timid
9
Great